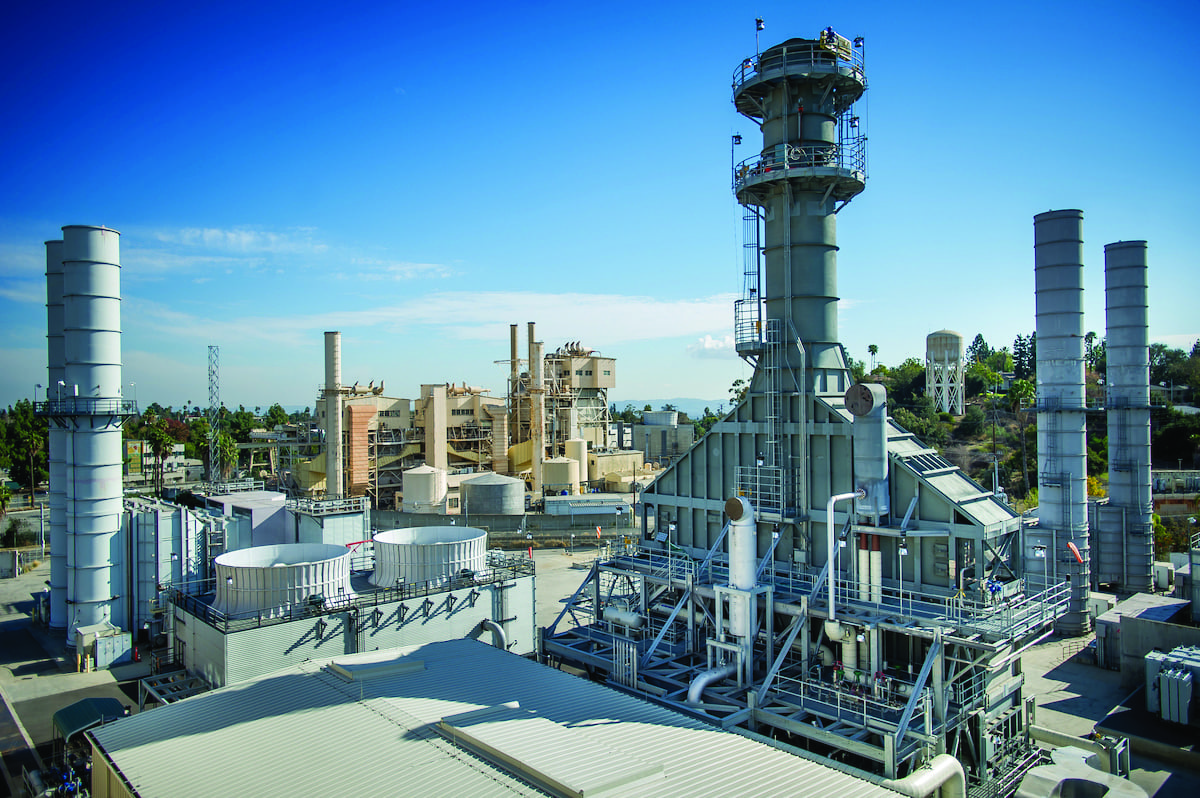 The Glenarm Power Plant has been keeping the lights on around Pasadena, California, for more than 110 years. The historic site has expanded over time and has included a total of 17 different power generation units, the most recent of which, GT-5, earned POWER’s 2017 Reinvention Award. The unit didn’t go online without a hitch, but the end product gives the city its most efficient and flexible unit yet, with an emissions profile that is one of the industry’s best.

Pasadena, California, is probably most famous for being home to the Tournament of Roses Parade, held annually on New Year’s Day, and the Rose Bowl game—the oldest college football bowl game in the country. But between the first and second playing of the bowl game, which spanned a 14-year period from 1902 to 1916, a new power plant was constructed and placed into service on Glenarm St. at the end of Raymond Ave. The steam plant and 200-kW Crocker-Wheeler generator began powering Pasadena’s streetlights on July 4, 1907.

Since that time, the city has expanded the Glenarm plant and added multiple generating units to keep up with customer demand. The now-14-acre site consists of two groups of generating facilities bisected by the Los Angeles County Metropolitan Transportation Authority Gold Line tracks. The Glenarm Plant resides to the west of the tracks while the Broadway Plant is on the east side.

By 2009, the site was home to four natural gas-fired turbine generators, but the city was in need of another. As part of Pasadena Water and Power’s (PWP’s) then-current Integrated Resource Plan, a new unit, GT-5, was proposed to replace Unit B-3 located on the Broadway site. B-3 was touted as the U.S.’s most-efficient unit when it entered service in 1965, but GT-5 would be nearly twice as efficient as the old steam boiler equipment.

There were several benefits that could be realized by repowering the Glenarm power plant. Reducing operating, maintenance, and fuel costs were certainly big factors, but maintaining the city’s ability to generate power locally was also important. With renewable energy such as wind and solar power growing rapidly in California, the need for flexible generation that could accommodate intermittent resources also made a fast-starting gas turbine a logical choice. On June 2, 2014, the Pasadena City Council approved the construction contract to add GT-5, with commercial operation slated to begin in June 2016.

The unit would be a highly efficient, 71-MW GE LM6000 combined cycle unit (Figure 1). ARB Construction, a subsidiary of Primoris Corp., was selected as the prime contractor for the project. Innovative Steam Technologies would supply the once-through steam generator, and Shin Nippon would deliver the steam turbine.

A formal groundbreaking event was held on July 2, 2014, and work to remove outdated equipment both above and below ground quickly began. Obsolete tunnels were demolished, scrap metal was recycled, and the site was prepared for construction activities.

Contributing to the Local Community

The city wanted the project to benefit the local economy as much as possible. With that in mind, it developed a local participation plan that called for 15% of the project’s subcontracting and procurement to be satisfied by Pasadena businesses. The plan also targeted 25% of the project payroll to go to city residents. The local hiring component was facilitated through a Project Labor Agreement with the Los Angeles and Orange County Construction and Building Trades.

“The city feels very strongly about making sure that local residents benefit in a direct way from local projects,” Terry Tornek, mayor of Pasadena, said in a interview recorded during the GT-5 ribbon-cutting ceremony on February 24, 2017. “We had very aggressive goals for local employment and beyond just hiring people for the duration of the job, the real success is if you can get people into a training program—a union training program—that will allow them to participate in that kind of work on an ongoing basis.” 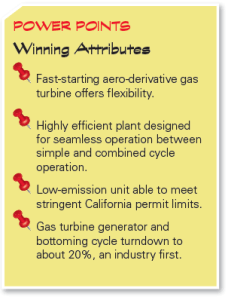 According to a July 2016 tally, the project fell slightly short of the local hiring goal, with Pasadena residents only accounting for about 20% ($2,159,340.10) of the reported certified payroll. Local businesses, however, more than made up for the difference, as they accounted for 34.5% ($2,289,390.20) of the total contracting and procurement.

There was also a strong desire to be a good neighbor to nearby residents, specifically in terms of noise and heavy-equipment traffic. From the start, construction crews strictly adhered to the city’s noise ordinance and limited work from 7 a.m. to 3:30 p.m. Monday through Friday. To minimize traffic congestion, trucks and heavy equipment were restricted to traveling on designated city truck routes. Work hours changed as situations warranted, and when heavy generator components were transported, delivery trucks rolled through the city at night, arriving via preapproved truck routes before sunrise.

As is the case with most large projects, there were hiccups along the way. Record-setting rainfall in December 2014 turned the ground to muck and delayed work slightly. Later, excessive rains from April 2015 through June 2015 in Houston, Texas, were blamed for delays in the delivery of the plant’s power distribution center. ARB asked the city for a 13-week postponement to the unit’s commercial operation date as a result.

Yet, GT-5 was close to being back on track when the unit was fired for the first time on April 2, 2016. One week later, the generator was synchronized to the grid, marking another key milestone. The construction team moved forward with testing, and a summer grand opening still looked possible.

But California’s strict emissions limits proved to be more difficult to meet than expected. In a June 2016 status report, it was noted that the unit had been placed in combined cycle operation and had reached its maximum operating limit of 71 MW, but the commissioning team had not been successful in getting the unit to achieve emissions compliance.

GE and specialty consultants extensively tested the unit, analyzed emissions data, and tuned the air pollution control system to no avail. The unit’s air permit allowed 204 hours of operation prior to certifying the emissions monitoring equipment, but certification could only occur after the unit achieved emissions compliance. Therefore, PWP had no choice but to obtain a variance from the South Coast Air Quality Management District (SCAQMD) to allow commissioning to continue.

Modifications were made to equipment, which resulted in emissions closer to permit limits, but they were still unacceptable. Stack testing was conducted to verify the continuous emissions monitoring system (CEMS) analyzer readings. The results proved that further testing, analysis, and design changes would be necessary to get NOx and ammonia slip emissions in line.

In mid-September, installation of a fourth set of modifications began. A vertical baffle was installed on the west end of the catalyst area, sawtooth mixers were installed on 3-H headers, modifications were made to the tempering air fan lance, and inlet duct kickers were added. The commercial operation date continued to slip.

GE had to work closely with suppliers to ensure noise guarantees were met too. With the plant bounded by hillside residential communities to the south and west, it was subject to very restrictive noise criteria. Monitoring was required at 14 locations with levels as low as 45 decibels mandatory during startup, normal operation, and shutdown.

Sound walls were added to the west side of the generator step-up transformer, around the base of the once-through steam generator, and in the area of the variable bypass valve exhaust stack. The gas compressor sound attenuation enclosure was also redesigned with three walls and a partial roof to enhance performance. Noise abatement in the vicinity of the steam turbine building was also a critical aspect of the project.

But perseverance paid off. GE issued a notice on November 18, 2016, that GT-5 was ready for performance testing, and on December 1, 2016, performance testing for emissions, thermal performance, capacity, and noise commenced. In the end, the plant passed all aspects, the CEMS was certified, and the variance was terminated with the SCAQMD. The plant entered commercial operation on December 18, 2016, having had no lost time injuries during construction.

“This is a plant that, if there’s a problem with the grid or if we need power quickly, can literally be online within 10 minutes,” said Tornek. “The old plant that it’s replacing—the steam-fired plant—took 72 hours.”

The Glenarm Repowering Project may have faced challenges, but the technology is sound and the lessons learned will be important for all future projects. The City of Pasadena set out to add a highly efficient unit that could start and stop quickly to provide a stable source of power to backup intermittent renewable resources. With a lifespan of 30 years or more expected, the $136.9 million investment seems a small price to pay for a highly reliable asset.

“GT-5 is important in a number of ways,” Tom Doughty, vice president of customer and state affairs with the California Independent System Operator, said at the ribbon-cutting ceremony. “One, it’s flexible. It helps us on the grid level to manage the variability of wind and solar resources. But two, it’s clean. Units like this have a low-carbon and low-pollution footprint, and that’s important to all Californians.” ■