Utility customers depend on and expect reliable, affordable electricity for virtually every aspect of their lives. At the same time, electricity producers in the United States are faced with finding cost-effective methods to meet ever-increasing demand and more stringent environmental regulations.

Though it’s not a new trend, the frequency with which new regulatory air quality initiatives are being based on the cumulative environmental impact of many sources from a broad geographic area is increasing. The market-based mechanisms of the Clean Air Act’s Title IV Acid Rain requirements have been successful. As a result, today’s regulatory programs are relying on nondescript emission reduction goals in the form of emissions trading programs to meet quickly changing environmental requirements.

The theory is simple: Install emission controls on the units that will yield the lowest dollars per ton emission reductions and then share those costs across an emissions trading program. However, electric utilities are faced with the complexity of identifying the best business model for implementing emission reductions in a competitive environment.

In the absence of site-specific regulatory requirements, electric utilities are forced to explain why capital-intensive emission control projects are prudent to internal management, shareholders, rate regulating agencies and public constituencies. The recent Clean Air Interstate and Clean Air Mercury Rules (CAIR and CAMR) bring many of these factors together and require a balancing act from the coal-fired utility sector.

On May 12, 2005, the U.S. Environmental Protection Agency (EPA) published the final Rule to Reduce Interstate Transport of Fine Particulate Matter and Ozone (Clean Air Interstate Rule); Revisions to Acid Rain Program; Revisions to the NOx SIP Call (FR Vol. 70, No. 91, pp. 25162 – 25405). Known as CAIR, this action requires significant reductions of air emissions in the eastern half of the United States:

These emission reduction requirements are designed to remedy the affected states’ "failure" to address the significant contribution of pollutant emissions transported from one state to another.

Promulgation of CAIR not only provides a market-trading mechanism through which states could remedy this "failure" but also started the Federal Implementation Plan or "FIP" clock. It thus established a deadline for states to either implement the federal CAIR or have it implemented for them by the EPA.

The regulatory basis of CAIR is section 110(a)(2)(D) of the Clean Air Act, which requires that states develop Clean Air Act implementation plans which:

Because "contribute significantly" is not defined in the statute, the EPA conducted photochemical transport modeling and developed thresholds of statewide culpability. The aim is to determine which states contribute significantly to downwind nonattainment areas for the eight-hour ozone and fine particulate matter (PM2.5) National Ambient Air Quality Standards. 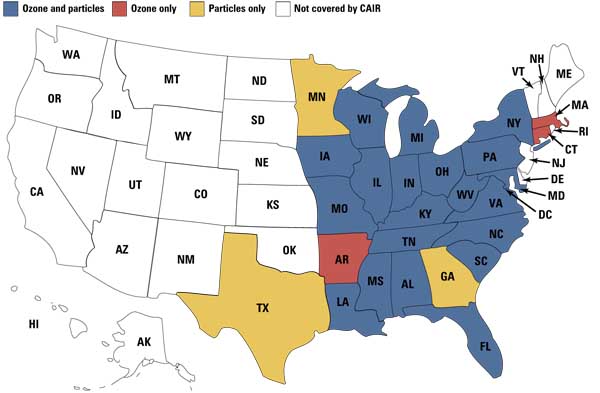 Although the CAIR rules provide states with flexibility in determining which industry sector, or sectors, will be required to implement emissions controls, the rules are targeted at forcing emissions reductions from the electric utility sector.

The CAIR rules establish applicability at the unit or boiler level for those serving a generator with a nameplate capacity of more than 25 MWe producing electricity for sale. Subject units are stationary, fossil fuel – fired boilers or stationary, fossil fuel – fired combustion turbines serving at any time since the latter of November 15, 1990, or start-up of the unit’s combustion chamber.

"Fossil fuel – fired" is defined as firing any amount of fossil fuel at any time. However, an exemption for solid waste incinerators firing more than 80% non-fossil fuels is provided in the CAIR rules. Co-generation units selling more than one-third of their potential electric output capacity and more than 219,000 MWh annually for sale on any utility power distribution system are also subject to the CAIR requirements.

As noted, the applicability is based on the servicing of a turbine with a nameplate capacity of more than 25 MWe, not heat input or MW equivalent of a particular unit. Smaller boilers using a common steam header to serve a 25-MWe turbine are subject to and included in the CAIR program.

The CAIR SO2 emissions trading program uses the existing Title IV Acid Rain market and allowance allocation system. Under this system SO2 allowances will continue to be distributed at the rate and levels contained in the federal Acid Rain provisions. CAIR SO 2 emission reductions are achieved through the implementation of increased allowance retirement ratios based on the vintage year of the SO2 allowances to be retired.

As the retirement ratios indicate, the CAIR SO 2 rules implement a 50% reduction in emissions of SO2 during Phase 1 and a 65% reduction in Phase 2. The use of banked SO2 allowances resulting from the overcontrol of SO2 emissions for compliance with the Acid Rain program may provide temporary relief in terms of the time available to install additional SO2 emission controls.

Similarly, the CAIR ozone season NOx trading program builds on (or, better stated, replaces) the established NOx SIP call program that was developed as part of the one-hour ozone attainment planning in the eastern United States. The ozone season is defined as the five-month period from May 1 through September 30. As a result, the amount of NOx emitted specifically during the ozone season must be tracked and ozone season allowances retired as necessary for compliance.

The CAIR rule also establishes an emissions trading program for the total annual emissions of NOx from affected facilities. Total NOx emissions, including those that occur during the ozone season, are included in the CAIR annual NOx program.

Unlike the CAIR SO2 program, states have extensive discretion regarding how allowances for both the ozone season and annual NOx programs are distributed within their jurisdiction. States may distribute some or all of their allowance allocations and even redirect allowances to other programs such as energy efficiency or renewable energy programs.

CAIR-affected units must monitor emissions in accordance with 40 CFR Part 75. In general, continuous emission monitors provide the most accurate estimate of pollutant emissions. Additional methods for estimating emissions, such as low mass emitter estimation methodologies, are provided for in 40 CFR Part 75.

Facilities that are considering the use of low mass emitter methods should carefully evaluate whether or not these conservative emission estimation methods result in a substantial overestimate of emissions. This information can be used to balance the cost of continuous emission monitoring systems with the potential for emissions overreporting that may result.

Facilities subject to the CAIR requirements are required to begin emission monitoring one year prior to the start date of the trading program. Consequently, facilities that have not been required to monitor emissions to the standards established in 40 CFR Part 75 must commence monitoring of NOx in 2008 and SO 2 in 2009.

On May 18, 2005, the EPA published the final Standards of Performance for New and Existing Stationary Sources: Electric Utility Steam Generating Units (FR Vol. 70, No. 95, pp 28606 – 28700). Known as CAMR, this action establishes a nationwide cap on emissions of mercury from coal-fired electric generating units.

In addition to the market-based emissions trading program for mercury, CAMR establishes mercury emission performance standards by coal rank such as bituminous, subbituminous, and lignite.

Unlike the CAIR rules, CAMR does not provide states with flexibility in determining which industry sector or sectors will be required to implement emission controls. Requirements are specific to coal-fired utility units as defined in the federal rule.

CAMR, like CAIR, establishes applicability at the unit or boiler level for those serving a generator with a nameplate capacity of more than 25 MWe producing electricity for sale. Subject units are stationary, coal-fired boilers or stationary, coal-fired combustion turbines serving at any time since the latter of November 15, 1990, or start-up of the unit’s combustion chamber.

"Coal-fired" is defined as combusting any amount of coal or coal-derived fuel, alone or in combination with any other fuel, during any year. Co-generation coal-fired units with a nameplate capacity of more than 25 MWe that supply for sale in any calendar year more than one-third of the unit’s potential electric output capacity or 219,000 MWh (whichever is greater) to any utility power distribution system are also subject to the requirements.

As with CAIR, CAMR applicability is based on the servicing of a turbine with a nameplate capacity of more than 25 MWe. However, there is an area of uncertainty due to conflicting definitions between the CAMR and Boiler MACT rules. Smaller boilers using a common steam header to serve a 25-MWe turbine are subject to and included in the CAMR program requirements.

States have extensive discretion regarding how allowances for CAMR mercury emissions trading program are distributed within their jurisdiction. This flexibility, combined with considerable and ongoing opposition from many environmental groups and some regulatory agencies, will result in utility companies facing a greater variety of mercury allocation methodologies, emission caps, and performance standards from state to state.

Unlike monitoring for SO2 or NOx, the state of the science of continuous emission monitors for mercury is relatively new. CAMR allows for traditional flue gas sampling methods, common to continuous emission monitoring for NOx and SO2. This is in addition to the use of sorbent traps that collect mercury from the flue gas stream over a period of time.

Measurement of mercury emissions at facilities subject to the CAMR regulations presents new challenges for the electric utility sector. Difficulties associated with the installation, operation, and certification of new technologies continue to be worked through by the industry.

Together, the CAIR and CAMR regulatory programs establish a total of four new emissions reduction requirements and associated emissions trading programs for the electric utility sector. The reductions in air emissions that will result from implementation of these rules are substantial. The CAIR NO x cap that begins in 2009 requires that emission rates of NOx from all affected electric generating units in the eastern half of the United States must average approximately 0.15 lb/mmBtu.

Though these emissions reduction requirements can be met on sectorwide basis, uncertainties remain as to exactly how, or with how much room to spare, the emissions targets will be met. There is also the question of what the market price of any surplus emissions allowances generated from the overcontrol at some plants will be, particularly in the first few years of the program.

In what amounts to a high-stakes game of musical chairs, electric utilities are working to identify the best combination of emission controls, operating scenarios, and market dynamics that will ensure cost-effective compliance with the emission reduction requirements of the CAIR and CAMR regulations.