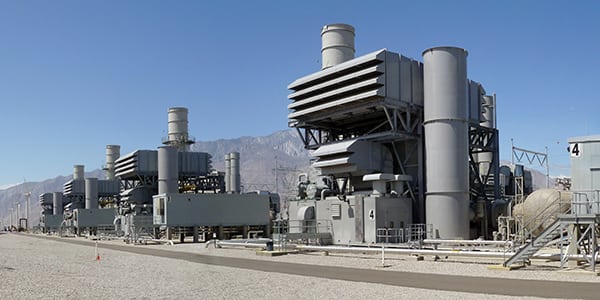 Renewable generation may be the most talked-about form of distributed power these days. However, historically, engine- and turbine-based smaller-scale generation—strategically located where needed by loads or for grid support—has supplied valuable distributed power. For many reasons, the roles for distributed power provided by rotating and reciprocating equipment continue to increase.

The U.S. utility industry is experiencing growth in renewables, a need for better resiliency during emergencies, and necessary upgrades to its aging infrastructure. Distributed power—which we define as primarily gas-fired generation capable of ramping from cold start to full load in as little as 5 minutes—is ideally suited to address these needs with multi-purpose modular power blocks that are smaller than traditional central station generation power blocks. These plants can start quickly, follow the fluctuating load, and support grid frequency and voltage at many nodes. When sited close to loads, they also reduce transmission and distribution losses and potentially defer costly upgrades.

Distributed power is not a new concept. Every grid began as a collection of small, interconnected generators and expanded, achieving better economies of scale. Today the U.S. has mostly a collection of interconnected grids that once began as distributed generation. These grids share the benefits of fuel diversity and decades of technology advancement that has resulted in cleaner and lower-cost electricity, all while delivering reliable service.

In recent years, distributed power has found a variety of uses in emerging economies; these countries are beginning their journey toward large, well-interconnected systems of consumers and suppliers of electricity. But well-developed infrastructure systems—such as those in North America—have started to experience a second renaissance of turbine- and engine-based distributed power. For 21st-century grids, this sort of distributed power serves multiple purposes beyond just providing power. We expect this trend to continue in the U.S. due to the flexible, reliable, and modular nature of these distributed power projects that can ideally serve the new challenges that face North American electrical infrastructure.

Over the last few decades, GE has developed a portfolio of 100-kW to 116-MW reciprocating engines and gas turbines built from the combined efforts of the company’s research, aviation, and energy businesses. Today, more than 3,000 turbines and 35,000 engines have been produced, delivering power in more than 70 countries. In North America and Western Europe, we see a rise in demand for these products for infrastructure networks that, until recently, have been dominated by centralized power generation.

Distributed power is flexible, efficient, and modular. These attributes are essential to support the integration of wind and solar power. In the U.S. alone, wind and solar power have grown more than 10-fold since 2000, with more growth to come. While wind and solar energy have clear environmental benefits, they must be supported by dispatchable and efficient generation to maintain a stable grid.

Flexible resources, including GE’s LMS100 aeroderivative gas turbine and J920 FleXtra gas reciprocating engine, can be dispatched during periods of low renewable production or as peaking power. Gas turbines can offer fast startup times of 10 minutes or less and operate continuously on automatic governor control at a wide range of loads. The LMS100 can be dispatched at loads as low as 20% of full load and can respond at rates in excess of 50 MW/minute (min), enabling rapid response to sudden changes in load or renewable energy production. For example, the 8 x LMS100 site in Southern California shown in the opening photo achieves 50 MW+/min per unit and supports renewables integration to the local grid.

GE’s J920 FleXtra engine offers a 5-minute startup time from zero to full load. To achieve high availability and flexibility, multiple engines can be started in parallel, which is the case for the Sky Global Partners LLC project in Texas (Figure 1). When operational, this plant will consist of six J920 FleXtra engines, capable of generating 51.2 MW at 49% electrical efficiency. This power plant will be well-suited for frequent starts and stops, as well as load-following operations, without additional maintenance costs. The engine’s two-stage turbocharger technology will also enable the units to run at full load at temperatures as hot as 104F. This GE engine family achieved a technical breakthrough in March when it achieved 50.1% electrical efficiency in a test environment—a first for the industry. Higher efficiency can help to better meet new demand for more efficient on-site power, enabling significant fuel cost savings.

The Black Hills Corp. has developed a 2 x LMS100 simple cycle power plant, in combination with a 4 x LM6000 combined cycle power plant in Pueblo, Colo., for a total capacity of 380 MW. The plant is capable of a 10-minute start for gas turbines and less than an hour for combined cycle hot start time, all while employing load-following and cycling capabilities based on proven technologies. The Black Hills installation can serve a full range of power load requirements for the region, and it is an excellent example of distributed power’s greater flexibility compared to older centralized generation facilities. The superior cycling and mid-merit performance can help to integrate wind and solar power in the region, as needed, while also providing efficient baseload power.

In short, these flexible, efficient, and modular power plants reduce fuel cost, increase availability, and help the grid to cope with the variable and uncertain power needs.

Shifting from Diesel to Gas

Distributed power also can provide needed ancillary services to the grid and can be located near a load center, which reduces electrical losses.

Nearly every major urban center is experiencing load growth, and these areas are supported by aging power lines and transformers nearing their overload limits. These pockets of congestion often drive utilities to re-conductor the lines, replace transformers, and/or upgrade substations. The time and cost associated with these upgrades are increasingly being compared to the cost of deploying distributed power closer to load.

With distributed power, it may be possible to defer or potentially eliminate the need for a costly transmission and distribution (T&D) upgrade and avoid the transmission losses associated with delivering power from large, centralized generation plants.

To address its growing urban load and aging infrastructure, New York Power Authority built five distributed power plants strategically located in or near the load centers of New York City. Figure 3 shows the Pouch Terminal on Staten Island, which is situated in a residential and shopping area. Plants with high power and footprint density, like the one in Pouch Terminal, can efficiently serve local load needs and support system reliability.

Distributed power can also serve local thermal needs via CHP. In these applications, exhaust energy is extremely valuable to the end user. The heat can be used for absorption chillers (air conditioning) or to produce steam for industrial processes. In other applications, exhaust heat can be used for heating a building or warming water, thereby saving the end user significant costs (Figure 4). Such installations can also provide valuable overall energy security.

A wide variety of power generation sources—including reciprocating engines and gas turbines—can be easily configured for CHP applications. GE’s broad portfolio of distributed power technologies has served more than 20 GW of these cogeneration applications, with more than 11,500 units deployed globally.

The grid not only requires power. It also requires a steady and stable voltage to deliver that power. Distributed power can provide the reactive power needed to enable this. Further, many distributed power plants can provide additional services, which are needed at specific locations on the grid, often close to load centers. Examples include reactive power via clutched synchronous condensers and black start to support electrical service restoration after an outage.

By using distributed power for these additional services, other investments could be eliminated. For example, the oldest power plants are often situated near load centers, and were built long before urban centers were developed. When these plants retire, there can be a shortage of reactive power sources that help to maintain a stable grid voltage. The need is sometimes magnified if sudden power fluctuations caused by loads and/or renewable power sources exacerbate local voltage fluctuations. Reactive power from distributed power plants can help alleviate these concerns.

As older, smaller (40-MW to 100-MW) power plants continue to be retired in the U.S., utilities are being faced with the new challenge of meeting heightened environmental and emissions standards for plants in the 21st century. Distributed power technologies are designed to meet or exceed air emissions standards while providing improved fuel efficiency and output as compared with retired plants. Aeroderivative gas turbines are often developed as combined cycle power plants to achieve even greater efficiency.

The city of Pasadena, Calif., is currently managing this issue by installing a new distributed power plant in combined cycle configuration. Pasadena Water and Power selected GE’s LM6000-PG gas turbine generator set for the Glenarm Power Plant Repowering Project in order to provide a flexible, cleaner generation source to accommodate new requirements of the California Independent System Operator. The plant, which includes the gas turbine, a once-through steam generator that can run dry (without water), and a steam turbine, will produce a total of 71 MW once operational.

Resiliency and Speed of Installation

Lastly, distributed power’s resiliency is rising in importance for North American electrical infrastructure. As with any power project, a lot can change over the life of a plant, including fuel price, supply disruptions, and pipeline additions that could bring natural gas closer to a plant already burning liquid fuel. Natural disasters can exacerbate a plant’s fuel challenges, disrupting supply and possibly disrupting T&D infrastructure. Dual-fuel-capable distributed power plants can enable higher plant availability in these circumstances.

Speed of installation is also an advantage for distributed power. In September 2014, Hurricane Odile reached the Baja California peninsula in Mexico. Within days, four of GE’s TM2500+ turbines were providing more than 100 MW of power to the region (Figure 5). These fuel-flexible, compact power plants can be delivered and installed quickly, enabling service to be restored quickly.

A broad portfolio of 100-kW to 116-MW distributed power products provides building blocks that can be used in a variety of applications for U.S. utilities. No two projects are alike, and the opportunity to place these building blocks in a variety of locations enables additional value for the end user as well as the local utility or grid operator. The flexible, adaptable, modular, and resilient nature of distributed power can be used to address existing challenges as well as emerging ones that face the U.S. grid, particularly the growth in renewable energy production. ■