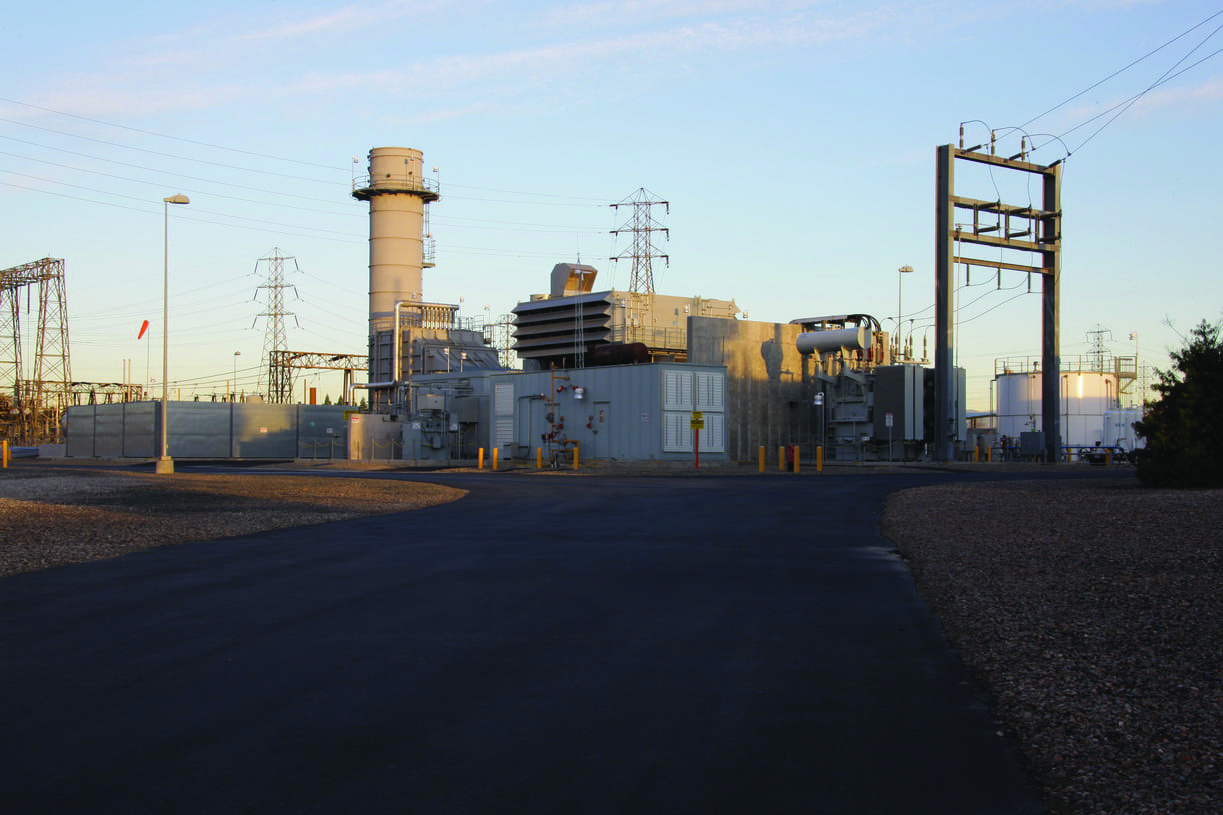 Water and power have long been interconnected, but in California they are practically Siamese twins. The state is coming off a five-year drought, the most intense in a century. Reduced hydropower operation during the drought cost consumers in higher power costs and drove up power sector emissions.

California’s powerful State Water Resources Control Board is cracking down on once-through cooling on ocean-front facilities, affecting the operation of 27 power plants with a total capacity of 20.7 GW, and leading to the retirement of 17 plants. Some conservationists have even complained about the use of water to wash solar panels.

The lack of large bodies of inland water has led power generators in the state to be more water conscious, relying on dry cooling systems or low-water systems that draw from groundwater. But Southern California Edison (SCE) has found ways to be even more water frugal, and it has been able to cut costs and improve reliability in the process. For the company’s pioneering efforts with water purification systems, POWER is pleased to honor SCE with its 2017 Water Award.

In its vast fleet of assets, SCE has five gas-fired peaking plants that suffered from “cost-intensive” water management processes. Four are in the Los Angeles basin—Stanton, Norwalk, Ontario, and Rancho Cucamonga—while one is in Ventura County, at Oxnard, on the Pacific coast. All are GE LM6000 gas combustion turbines rated at 50 MW each.

While gas combustion turbines use much less water than steam power plants, water management is still an issue. Combustion turbines work by first igniting natural gas mixed with air in a combustor, creating a hot exhaust that is forced through the turbine at high pressure and temperature. Water is misted into the compressor section of the turbine to increase the density and mass of the air flowing into the combustor. Water is also used in the combustor to reduce the temperature of the flame and lower nitrogen oxide emissions. 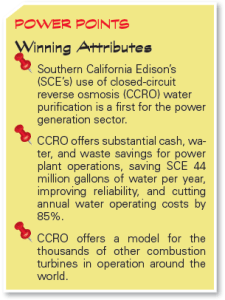 Even though SCE was using municipal water supplies—drinking water—it was not clean enough for the power plants. To avoid damaging the turbine components, water must be purified to reduce minerals, metals, and organic and inorganic materials that are dissolved in the water.

SCE had been relying on mobile demineralization trailers to remove the suspended materials. Those rented trailers had a series of three resin beds that used an ion exchange technology to remove charged particulates (cations and anions), and a polisher that did a final rinse.

A major drawback with the mobile trailers, however, was that when the resin beds became saturated with ions, they would have to be returned to a facility to be cleaned and refreshed. Renting the trailers was an expense, but the cleaning cost, added work of moving the trailers around, and the risk of failure combined to make them an unattractive option in the long run.

A reverse osmosis (RO) system offered a more permanent solution. In an RO system, water is forced under pressure through a permeable membrane to separate contaminants. But traditional RO systems have a number of disadvantages.

For one thing, traditional RO systems use more water to flush away contaminants, meaning greater water use overall. They typically have a multi-stage filtering process, requiring more pumping to push the water through each stage, and thus, they use more energy. Finally, the first membrane in the process tends to get fouled the most, requiring more maintenance.

Every stage of the traditional RO process is comprised of multiple sequential membranes, and each can only achieve 50% recovery of contaminants. It takes two stages to achieve 75% recovery, creating 25% waste. Even so, this is the standard configuration of most industrial and municipal RO systems.

Enter a new solution—a closed circuit RO (CCRO) system from Desalitech (Figure 1). In a CCRO system, the water flows in a loop, so there is only one stage that repeats. Filtered water flows out in a continuous stream, while the water with the contaminants—known as brine—is recirculated back to the front of the membrane array using a circulation pump. Once the desired recovery is achieved, the brine flush valve is opened and concentrated brine is purged from the system without stopping the production of filtered water, and releasing only a small amount of pressure. Maintaining pressure in the system, rather than releasing it to discharge the brine, is a key element in lowering energy use.

The Desalitech CCRO system allows the operator to specify the filtration rate for automatic operation. Once the desired rate is entered on the control panel, the system automatically purges the brine when that rate is reached. Rates up to 98% have been achieved with full-scale systems, according to Desalitech.

This closed circuit approach (Figure 2) can reduce wastewater by 50% to 80% compared to a traditional RO system, with 20% to 35% less energy, lower brine disposal costs, and fewer membranes to become clogged and replaced.

To conserve water and cut costs, SCE adopted Desalitech’s innovative CCRO process with mixed-bed polishers at the five gas-fired power plants mentioned previously. This was the first implementation of CCRO technology in the power generation industry. The systems operate at 91% recovery in a single-stage design, producing a guaranteed water purity of less than 10 microsiemens per centimeter.

Kishore Billapati of SCE expects that switching from mobile demineralization trailers to CCRO at the company’s five peaker plants will save 44 million gallons of water per year, improve reliability, and cut annual water operating costs by 85%, which amounts to more than $1 million in savings per plant. Most of the dollar savings comes from no longer renting and maintaining the mobile trailers. SCE still has other plants that use mobile trailers, and the company plans to keep mobile systems on call, in case the CCRO systems are unavailable.

Reduced water use was not a big money-saver for SCE, said Billapati, but it is still important because SCE strives to be a “good corporate citizen” in drought-parched Southern California.

The switch will reduce SCE’s water disposal costs, because the brine can be disposed of in a lower-cost brine disposal facility. Some of SCE’s combustion turbine plants do not have access to a sewer line, so wastewater must be taken offsite via truck. Others have access to a special “brine line” operated by sewage districts, which directs very salty wastewater from industrial processes to a special treatment process, keeping it out of freshwater bodies like rivers, lakes, and groundwater.

While the water and dollar savings were important, Billapati said, the reliability benefits might be the greatest positive. “When the mobile trailers were exhausted, the plant couldn’t run,” Billapati pointed out. “You are at the mercy of the vendor to send you the trailers. With CCRO you are manufacturing your own water, so there should not be any interruption.”

For pioneering a better way to manage the water needs of its power plants and for managing water in a more sustainable manner, SCE is a worthy recipient of POWER’s 2017 Water Award. ■