China’s largest solar panel maker, Suntech Power, in mid-November announced plans to open a photovoltaic (PV) manufacturing facility in Phoenix, Ariz., in the third quarter of 2010. Roger Efrid, Suntech’s managing director, was widely quoted as saying that the company — which holds 12% of U.S. market share and is looking to reach 20% by 2010 — chose to establish a plant nearer to customers. This was smart business, even though panels would be made from solar cells imported from China, because solar panels are heavy, he told The New York Times: "As the price of solar panels has reduced dramatically in the last 12 months, the shipping costs have become a larger and larger portion of the overall cost of getting these projects to market."

Setting up in Arizona — as opposed to California or Texas or one of 15 other states considered — was prompted by a newly passed renewable energy tax incentive, which provides refundable tax credits and property tax reductions for manufacturers, Suntech said. The move was praised by Arizona’s Governor Jan Brewer, who claimed that several other manufacturers would follow. Analysts also hailed Suntech’s move, saying a "Made in U.S.A." product would be more marketable to federal buildings, for example, which require American-made panels.

The news, however, raises questions about the state of China’s PV production sector. That country manufactures 26% of the world’s solar panels — making it the world’s leader. Most are exported: China’s Suntech Power, for example, shipped out 98% of the panels it produced (Figure 3). 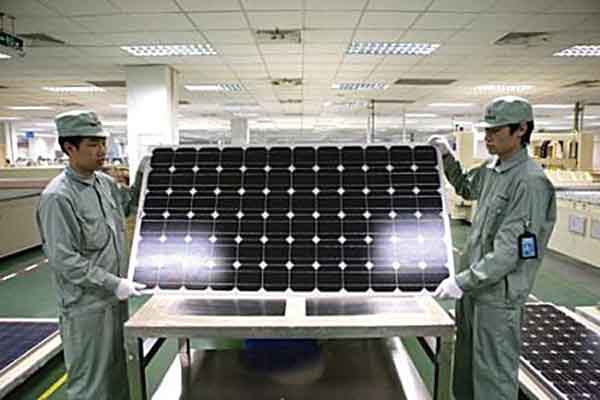 3. To be made in the U.S.A.? China’s largest solar panel maker, Suntech Power, in mid-November announced it would set up a photovoltaic manufacturing facility in Arizona. It was drawn there by a recently passed renewable tax incentive. Suntech, which exports 98% of its panels, said the move was smart business and that being closer to its customers would reduce shipping costs. Courtesy: Suntech Power

The country, which had imported 90% of raw materials — polycrystalline silicon, or polysilicon — from Japan and the U.S. to make its PV panels, has invested heavily to improve techniques and upgrade equipment. But, though the country is now self-sufficient in polysilicon, the financial crisis has left many Chinese PV producers in bad shape, reports the Energy Tribune. More than half have reportedly begun limiting production; several others have gone bankrupt. Yet the Chinese government continues to push increased PV production — indicating the potential formation of a bubble in the PV market, analysts say.