About two weeks ago, Entergy finally threw in the towel on the James A. FitzPatrick Nuclear Power Plant in Scriba, N.Y., a move that came as a surprise to exactly no one who has been paying attention to the merchant nuclear business in the U.S. the past few years. FitzPatrick joined the long-troubled Pilgrim plant in Plymouth, Mass., which Entergy gave up on in October, and Vermont Yankee, which it shut down in late 2014.

Since the end of 2012, the U.S. has lost an astonishing eight nuclear reactors to premature retirements: Kewaunee, San Onofre (2), Crystal River, and Vermont Yankee (all now shut down); FitzPatrick (retiring in late 2016); and Pilgrim and Oyster Creek (both retiring in 2019, well ahead of their planned lifetimes).

Several other reactors are on life support. Exelon’s R. E. Ginna plant in Ontario, N.Y., has been fighting to secure a rate support agreement that would keep it running a few more years, while the company’s Quad Cities and Byron plants got a reprieve after they unexpectedly cleared PJM auctions this fall. Industry observers see anywhere from five to 10 other plants as being at risk of premature retirement.

What’s remarkable about this trend is how it’s come about not from government pressure or mandates as in Germany or Japan—where nuclear is also in retreat—but from pure market pressures. In mid-2013, I wrote a post asking, “Is Cheap Gas Killing Nuclear Power?” Two years later, I’m prepared to answer that question in the affirmative.

In the case of Pilgrim, FitzPatrick, and Vermont Yankee, Entergy specifically named wholesale power prices driven to record low levels by cheap shale gas as one factor in its decisions (Figure 1). As my colleague Kennedy Maize has noted, observers now strongly suspect that Entergy is planning to exit the merchant nuclear business altogether—because it’s clearly become a big money-loser.

1. Money pit. Entergy’s long-troubled Piligrim nuclear plant near Boston is shutting down because of an inability to compete in the ISO-New England market. Courtesy: Entergy

If you look at the list of retired and most at-risk plants, one common element jumps out immediately. Most of them exist in deregulated markets where power prices are largely set by the price of natural gas: ISO-New England (Vermont Yankee and Pilgrim), New York ISO (FitzPatrick and Ginna), and PJM (Oyster Creek, Byron, and Quad Cities). The other two plants, San Onofre and Crystal River, operated in more regulated markets, and while both were retired because of mechanical defects that were too expensive to repair, competition from gas-fired generation factored into both decisions to some degree.

Since 2012, when the problems for merchant nuclear really began, natural gas spot prices have stayed below $4/MMBtu except for a brief period last year, when a bitterly cold winter led to low stocks that pushed things up for a few months.

Since then, prices have fallen consistently, flirting with sub-$2 levels this fall. With gas in storage hitting a record high at the end of this year’s injection season, a repeat of 2014 seems unlikely. Meanwhile, gas production hit another record high in August at 81.3 Bcf/day. None of this, according to Energy Information Administration projections, seems likely to change in the short term, as production stubbornly continues climbing ahead of demand growth.

Where is nuclear still viable? That’s best answered by looking at the three states where a total of five nuclear plants are under construction: Georgia, South Carolina, and Tennessee. The common denominator there is clear. All three projects are being built in tightly regulated markets where the utility building them enjoys a government-sanctioned monopoly and the ability to recover costs in advance of operation (Figure 2). 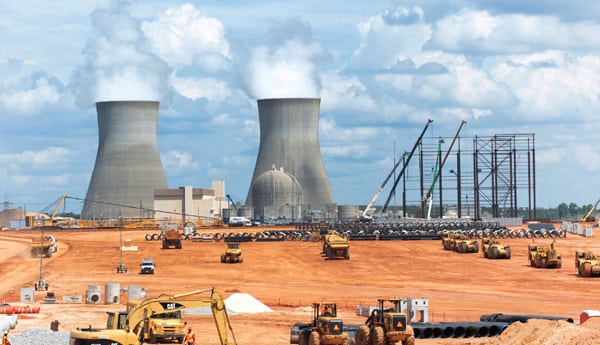 2. Outlier. Georgia Power’s Unit 3 and 4 expansions at Plant Vogtle are being paid for by the utility’s ratepayers well before their first kilowatt—a model that generally cannot be replicated in deregulated power markets. Courtesy: Georgia Power

The problem for nuclear is that momentum in the electricity markets over the past couple of decades has been toward flexibility and competition and away from monopolies and subsidies.

At the state level, attempts by Exelon and others to secure changes in the law to provide greater support for nuclear have been given the cold shoulder, while solar advocates are prying open previously closed markets like the Carolinas and Florida. Despite the challenges for merchant nuclear plants, no states are even considering an exit from problematic wholesale power markets, and independent system operators like PJM have shown no interest in rigging the game for nuclear either.

At the federal level, the Production Tax Credit and Investment Tax Credit, which provided enormous support for renewable generation, appear on their way out one way or another. The odds that the current Congress might pass some sort of nuclear production credit (an idea I mentioned in my 2013 post) would seem to be close to zero.

Nuclear’s greatest hope may be the Clean Power Plan (CPP)—which was revised in its final form to give more credit to nuclear generation—but that is far from a done deal. Even if the Democrats retain control of the White House in 2016, control of Congress is another matter, and the Supreme Court could still throw out or handicap the CPP on a variety of grounds.

Cheap gas is not going away. Greater state-level regulatory support seems highly unlikely. Even if the CPP survives in its current form, it won’t substantially change the economics of merchant nuclear.

The impending loss of nuclear generation presents a problem for a variety of reasons. Loss of generation diversity is never a good thing, and the loss of low-carbon electricity will complicate efforts to reduce carbon dioxide emissions. But the solution remains elusive.