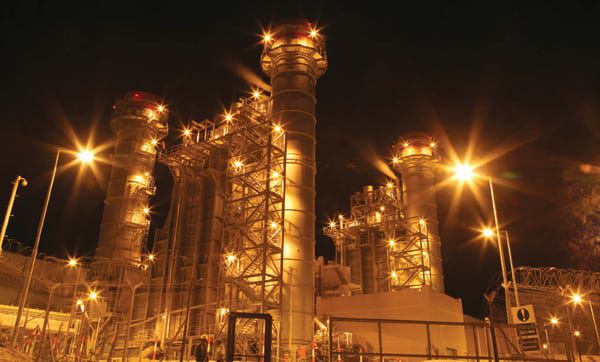 The Kingdom of Jordan’s first independent power plant set a standard for safe construction and operation across the Middle East. As a pioneer in Independent power production and as a leader in safe electricity generation, AES Corp.’s Amman East Power Plant is a POWER Top Plant.

AES Corp.’s $300 million, 370-MW gas-fired Amman East Power Plant entered commercial service in 2008 and was the first independent power plant in Jordan. The Jordanian government considers Amman East an important component in its efforts to reduce the country’s reliance on imported oil and to achieve a more sustainable energy balance.

AES and its construction partners also established a high standard of safety in the country and across the Middle East by completing the project without any life lost and without any major incident or accident. Because of this safety record, the power plant has received multiple awards, including the British Safety Award and a Top 10 power plant award for the Middle East and North Africa. The construction team received a Golden Hard Hat award in 2009 for delivering the generating plant on time (and, incidentally, $15 million under budget) with no lost time incidents recorded for the duration of the construction project.

For its path-breaking achievement as Jordan’s first independent power plant, and for its outstanding safety record, the AES Amman East Power Plant is a POWER Top Plant.

AES Corp., which built the plant and is a majority owner, is a diversified power generation and distribution company based in Arlington, Va. Founded in 1981 as one of the first independent power producers in the U.S., the company helped pioneer private investment in power generation and distribution in many countries. The company ranks as one of the world’s leading power companies and operates in both stable and high-growth markets, with operating capabilities across diverse fuel types and technologies. As of this past June, the company had assets worth $45 billion and an installed generating capacity of 38,400 MW in 23 countries. Its 2012 revenues were $18 billion.

Jordan traces its electricity sector to the 1930s, and the country’s electricity is provided through the National Electric Power Co. (NEPCO). Jordan became an independent country in the mid-20th century, but it previously had been part of the Ottoman Empire, and for a time was under British rule. According to the U.S. Central Intelligence Agency Fact Book, following World War I and the end of the Ottoman Empire, the League of Nations awarded Britain the mandate to govern much of the Middle East. Britain demarcated a semi-autonomous region of Transjordan from Palestine in the early 1920s. The area gained its independence in 1946 and became The Hashemite Kingdom of Jordan.

The country’s long-time ruler, King Hussein, successfully navigated competing pressures from the U.S., USSR, and UK, various Arab states, Israel, and a large internal Palestinian population. King Abdullah II, King Hussein’s eldest son, assumed the throne following his father’s death in 1999. He implemented a number of political and economic reforms, but in the wake of the 2011 “Arab Spring” across the Middle East, Jordanians continued to press for further political liberalization, government reforms, and economic improvements.

Installed electric generating capacity in Jordan is around 3,140 MW, almost 99% of which is fossil fuel–based. The country’s electricity industry started in 1937 when street lights in Amman were converted from kerosene to 200 electrical lamps. These were powered by a 7-hp engine that operated a mill during the day and the street lights at night. The company that supplied the power, Amman Electricity, became the first Arab company in charge of generating and distributing electricity through Arab funds and skills.

Thirty years later, the Jordanian government began a study to further develop the country’s electricity industry. The result was a seven-year plan (1964–1971) that included several elements:

■ Establish a Jordan Electricity Authority to generate, transmit, and sell power to distribution companies on a wholesale basis and to distribute electrical power in areas not subject to franchise companies.

■ Establish a Jordanian electricity project, including central power plants that would consist of large-scale steam turbines.

■ Improve and extend existing power generating plants and construct a 132 kV transmission network to cover all parts of the kingdom and improve and develop the existing distribution networks.

To execute the plan, the government founded the Jordan Electricity Authority in 1967. The Authority then established the kingdom’s first power plant run by steam and gas turbines; the first 14.7-MW gas turbine was grid connected in 1975. The first 33-MW steam unit was connected in 1977.

Jordan imports fuel from outside the kingdom, which has led to efforts to reduce consumption and diversify fuel sources. As part of those efforts, the five-unit, 650-MW Aqaba thermal power station was built and brought into service in 1999. The Aqaba plant accounts for 61% of Jordan’s installed capacity. Transmission lines built to connect the plant to the grid also offered a connection point between the Jordanian and Egyptian electric networks.

In September 1996, NEPCO was created to succeed the Jordan Electricity Authority. NEPCO is responsible for power transmission and control, buying electricity from generating companies and selling it to distribution companies, and managing the electrical connection network with surrounding Arab countries.

According to a 2007 World Bank study completed in conjunction with the Amman East project proposal, Jordan’s electricity consumption was forecast to grow at around 3.5% a year, meaning that its roughly 20% reserve margin would all but evaporate by 2010. To maintain a safe reserve margin, the government initiated work on a project that evolved into the Amman East project.

The plant’s gas turbines are V94.2 Ansaldo turbines manufactured by Ansaldo Energia SPA under a license from Siemens AG. The turbine offers full speed and no load in less than 5 minutes, and baseload conditions about 15 minutes later. It also offers fuel flexibility for a variety of fuels and characteristics, from naphtha to heavy oil, and fuel gas from sources as diverse as refineries and blast furnaces. An Ansaldo Energia–designed burner reduces NOx emissions in fuel gas mode, meaning the machine is capable of achieving emission levels lower than 30 mg/Nm3, albeit with a small derate in power output. The total worldwide installed capacity of the Ansaldo 94.2 gas turbine is around 15,100 MW, all of which is outside of North America and from the UK to Bangladesh. The plant also provides black-start capability from two 2.4-MW diesel generators.

Agreements require Amman East to operate at an average lifetime equivalent availability factor of no less than 90%. The plant is expected to operate primarily on natural gas from an Egyptian pipeline, but it is capable of switching to diesel fuel oil if needed. Jordan began importing natural gas from Egypt in 2003 and most of its generation units now operate on this fuel. Future thermal generation will largely use natural gas but will be complemented by renewable sources such as wind.

Electricity generated by the plant is sold under a 25-year power purchase agreement with NEPCO, which also serves as the fuel provider under a 25-year agreement. Water is provided by the Water Authority of Jordan. The plant is designed to operate as a zero-discharge facility.

Multiple sources provided construction financing, including the Overseas Private Investment Corp., the European Bank for Reconstruction & Development, Sumitomo Mitsui Banking Corp., the Japan Bank for International Cooperation, the World Bank, the Europe Arab Bank, and Mashreq Bank. The project was completed $15 million under budget. In early 2012, the Qatar Electricity and Water Co. Q.S.C. became a partial owner through an investment in AES Oasis. ■