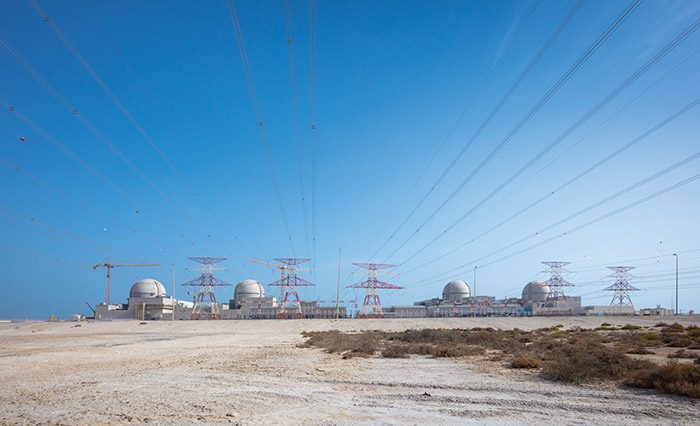 Creating a nuclear power program in a country that is new to the industry requires a lot of work, but it helps to have some experienced support. The United Arab Emirates (UAE) found good partners and put in the time to develop a world-class program. The result is an award-winning plant that will provide reliable power for decades to come.

When the United Arab Emirates (UAE) is mentioned, most people probably think of oil. That isn’t surprising, because crude and refined petroleum are by far the country’s largest exports. In fact, they totaled about $89.3 billion in 2019, more than four times the value of gold exported—the next highest commodity on the list—according to the Observatory of Economic Complexity.

When it comes to electricity in the UAE, however, natural gas is king. The International Energy Agency (IEA) reports gas-fired generation supplied 133,739 GWh of electricity in 2018 (the most recent data it has published) versus 1,070 GWh from solar photovoltaic and 953 GWh from oil, the next highest resources on that list. But you can expect big changes going forward. There’s a new kid on the block, so to speak. Nuclear power was added to the UAE’s energy mix this year with the first of four units placed in commercial operation and is forecast to supply about 25% of the country’s electricity needs when all four reactors are operational.

The addition didn’t happen overnight—it’s been more than a dozen years in the making. The seeds were first planted in a white paper the UAE released on April 20, 2008, highlighting the potential benefits of a Peaceful Nuclear Energy Program. Early in 2009, leaders began serious talks with nuclear power experts from around the world, most notably from South Korea, to establish the regulatory framework for the UAE’s nuclear program.

“Following a comprehensive and detailed review of three excellent bids from some of the world’s top nuclear suppliers, operators, and construction firms, ENEC has determined that the KEPCO team is best equipped to fulfill the government’s partnership requirements in this ambitious program,” Khaldoon Al Mubarak, chairman of ENEC, said during the announcement.

ENEC Managing Director and CEO His Excellency Mohamed Ibrahim Al Hammadi, further explained the decision at the time, saying: “We were impressed with the KEPCO team’s world-class safety performance, and its demonstrated ability to meet the UAE program goals. Additionally, the KEPCO team dedicated a highly experienced team to our project and has shown a serious commitment to transferring the knowledge gained from Korea’s 30 years of successful nuclear industry operation into the UAE program.”

As the regulatory body for the nation’s nuclear industry, one of FANR’s roles is to ensure the UAE’s nuclear energy sector is up to both national regulations and international standards. Among other tasks under FANR’s oversight is the responsibility for issuing nuclear facility licenses. The first license ever approved by the regulator was issued to ENEC on March 7, 2010. It allowed ENEC to survey potential sites for construction of the country’s first nuclear power plant.

Ultimately, the Barakah site, located in the Al Dhafra region of the Emirate of Abu Dhabi on the Arabian Gulf, approximately 53 kilometers west-southwest of the city of Ruwais, was selected. In July 2010, ENEC received its “License for Preparation of a Site for the Construction of a Nuclear Facility.” It also received a “Limited License for the Construction of a Nuclear Facility,” allowing some preliminary construction work to begin at Barakah.

KEPCO says its Advanced Power Reactor 1400 (APR1400) is a next-generation nuclear power plant developed by improving upon its Optimized Power Reactor 1000 (OPR1000) design, which, with 12 reactors in service, is the dominant model operating in South Korea. The APR1400 was developed through a government-led G-7 project from December 1992 to December 2001. KEPCO E&C (Engineering and Construction) was in charge of architect engineering and nuclear steam supply system design technology development for the project.

The APR1400 boasts an increased generating capacity compared to the OPR1000, from 1,000 MW to 1,400 MW, and the design lifetime has been increased from 40 years to 60 years. Another important safety improvement relates to seismic capabilities. The APR1400 is designed to cope with earthquakes satisfying all of the 0.3g seismic requirements in the bedrock and soil conditions using a site envelope concept (0.3g peak ground acceleration has been established by several advanced reactor vendors as the basis for their standard Safe Shutdown Earthquake). In addition, by introducing a quadrant layout design method for auxiliary buildings, the ability to cope with external shocks, such as fire and flooding, was also strengthened.

The APR1400 is a pressurized water reactor design. It has two coolant loops with vertical U-tube steam generators that include integral economizers. The reactor core has 241 fuel assemblies and the unit is designed to operate on an 18-month refueling cycle, which is based mainly on the type of fuel used in the reactor.

The first two APR1400 units—Shin Kori Units 3 and 4—were commissioned in Busan, South Korea, in 2016 and 2019, respectively. Four APR1400 reactors are currently under construction in Korea—Shin Kori Units 5 and 6, and Shin Hanul Units 1 and 2. The Barakah units are the first to be built outside of Korea, but KEPCO has high hopes for similar units internationally.

In November 2017, KEPCO E&C and Korea Hydro & Nuclear Power (KHNP) obtained the European Utility Requirements (EUR) certification for its EU-APR, which KEPCO says “is an evolutionary Advanced Light Water Reactor fully complying with the EU requirements and European codes and standards.” Additionally, with the joint agreement of KEPCO and KHNP, KEPCO E&C was able to acquire design certification of the APR1400 from the U.S. Nuclear Regulatory Commission (NRC) in August 2019. With the EUR and NRC certifications, along with design certification from FANR, KEPCO has said foreign market opportunities, including in the U.S., Poland, and Egypt, have been enhanced, and the additional export of nuclear power plants is expected.

One aspect of the Peaceful Nuclear Energy Program that the UAE seems particularly pleased with is the diversity of its workforce. During the International Ministerial Conference on Nuclear Power in the 21st Century, which was held in Abu Dhabi in November 2017, Her Excellency, Sheikha Lubna bint Khalid Al Qasimi noted some of the programs differentiators.

“Here in the UAE, we strongly believe in the equality of men and women, both in society and in professional development,” she said during a presentation. “From the very beginning of the UAE Peaceful Nuclear Energy Program, we emphasized strongly the need to bring more women into the nuclear industry and into what is generally considered a male-dominated sector around the world.

“At Emirates Nuclear Energy Corporation and its subsidiaries, I am proud to see that our efforts to inspire women to join this industry of the future has produced positive results. Today, 23% [now about 20%, as the workforce has grown significantly and the percentage of women added has not quite kept pace] of professionals working at ENEC are women. At the Barakah nuclear energy plant, approximately 10% of employees are female. This is a significant achievement and we will continue to support all women who want to join the sector,” H.E. Sheikha Lubna said.

She added, “The UAE Peaceful Nuclear Energy Program is one of the most diverse and perhaps the most multinational and multicultural nuclear program in the world, with over 40 nationalities involved. [This figure has grown to more than 50 today.] We celebrate this diversity and continue to promote understanding, diversity, and acceptance.”

Barakah Unit 1 was successfully connected to the national power grid on Aug. 19, 2020, marking the first time electricity generated by nuclear power was delivered to consumers in the UAE. Grid synchronization did not mean the end of the project, however; ENEC continued to follow international best practices to confirm safe reactor operation including power ascension testing and other verifications. On Dec. 7, 2020, Unit 1 achieved 100% power output. At 1,400 MW, it is the largest single generator of electricity in the UAE. Barakah Unit 1 officially commenced commercial operation on April 1, 2021. 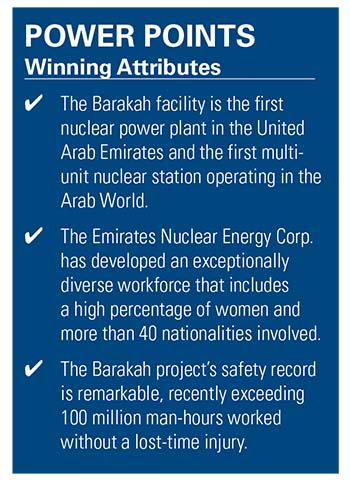 Meanwhile, work continues on Units 2, 3, and 4. Unit 2 achieved a major milestone on Aug. 28, 2021, when it was connected to the national power grid, making Barakah the first multi-unit operating nuclear plant in the Arab World. Units 3 and 4 are progressing nicely, benefitting from the experience and lessons learned during the construction of Units 1 and 2. Units 3 and 4 were reportedly about 95% and 91% complete, respectively, at the end of August. When all units are in operation, the Barakah facility will supply up to 25% of the UAE’s electricity needs.

In a decade, the UAE has been able to successfully make the transition to deliver a cleaner power sector through the Barakah nuclear power plant. Today, the baseload electricity Barakah produces underpins the UAE’s significant intermittent renewable projects, working together to generate clean electricity in the UAE. The Barakah plant is now delivering the largest decarbonization effort in the history of the UAE’s power sector. With Units 3 and 4 coming online in the coming years, Barakah is expected to reduce Abu Dhabi Emirate’s carbon emissions by 50% by 2025. Barakah will be generating 47% of Abu Dhabi’s electricity and 85% of its clean electricity, significantly supporting the UAE’s net-zero target and efforts to tackle climate change.

During the building of Barakah’s four units, more than 2.5 million cubic meters of concrete has been poured, and approximately 279,000 metric tons of reinforcing steel has been installed, setting what ENEC claims is “an international construction performance record.” Notably, in June, ENEC and KEPCO reported four years and more than 100 million safe man-hours without a lost-time injury at the Barakah site. ENEC and KEPCO’s accomplishments on the Barakah project make it a worthy POWER Top Plant award winner.