As the economy begins to grow again, the banking industry continues to stabilize, and lawmakers work on finalizing climate change legislation, the decisions made in 2010 will lay the foundation for the power industry for decades to come.

Year 2009 began amid one of the worst economic environments in many decades. U.S. industrial production collapsed, financial markets were in disarray, asset prices shrank, and we witnessed real demand destruction across most sectors of the economy, including the electric power industry. According to Energy Information Administration (EIA) data, total power generation was down 5.4% (the latest figures, year-to-date July 08/July 09), and industrial power consumption was down 11%. The nation spent most of 2009 wondering if, and when, a bottom would form under a free-falling economy. The decline in power generation for 2009 will be the greatest drop going back to 1949 — the earliest year for which the EIA collected data. In fact, 2008 and 2009 were the first time power generation declined in back-to-back years. The only other years net power generation declined in the past 60 years were during the recessions of 1982 and 2001 (Figure 1). 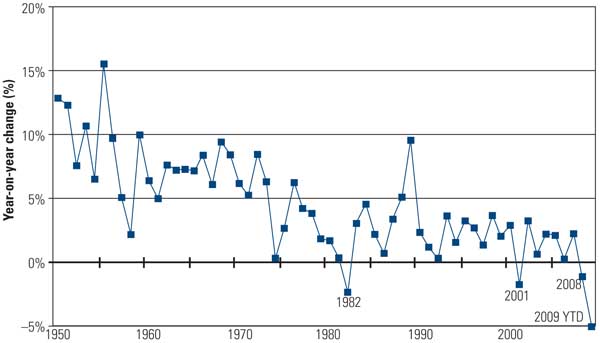 As 2010 gets under way, it appears the economy has stabilized, financial markets are lending again, and industry is ready to begin a new growth trajectory, albeit at a slower pace than before.

After collapsing in the first half of 2009, U.S. GDP grew at a reasonably strong rate of 3.3% in the second half of the year, although this growth was largely supported by the federal stimulus and depletion of inventories. Stripping out these effects, U.S. GDP grew in the second half at an anemic 1% rate on an annualized basis. As federal stimulus wanes and inventories stabilize, we expect U.S. GDP to be fairly weak in 2010, especially in the first half of the year. For the full year we expect 2010 U.S. GDP to grow roughly 2%, followed by stronger growth rates of 2.5% to 3.0% in 2011 and beyond.

As most readers know, GDP growth is a strong predictor of power generation demand. Considering the steep falloff of GDP in 2009 and the weak recovery expected in 2010, demand for power generation this year will likely be flat to slightly higher when compared to 2009. Based on our GDP growth expectations, it will likely take two to three years before total electrical generation reaches the level it was at prior to the economic meltdown. This temporarily alleviates the need to add new generation capacity.

The recession was so severe that the North American Reliability Corp.’s (NERC) "2009 Long-Term Reliability Assessment" indicates that most regions in the U.S. are expected to have adequate capacity reserve margins through 2018 (when including adjusted potential reserves). However, it is important to recognize that the recent economic slump was not caused by overinvestment in industrial capacity; it was caused by extreme leverage in the residential and commercial sectors.

The point is that when demand reaches the level it was at prior to the current recession, we will quickly begin to see the same capacity constraints we saw then. Even though utilities are not experiencing capacity constraints now, they need to continue to plan for new capacity to meet future growth and replace retirements.

This pause in economic growth provides an opportunity for the industry to reassess its business and prepare for future demand growth as well as future regulatory requirements.

There is increasing acquiescence to the prospect that the power industry will be governed less by economics and more by government regulation and environmental policy in the future.

There is no doubt that decisions regarding the depth, scope, and speed of greenhouse gas (GHG) emission reductions will have the greatest impact on the industry over the next several decades. These decisions will likely be finalized sometime in 2010.

Last year great strides were made toward a GHG emission reductions agreement. In June, the U.S. House passed the American Clean Energy and Security Act of 2009 — H.R. 2454, also known as the Waxman-Markey bill (Figure 2). The U.S. Senate took up the House bill in July and then proceeded to produce its version of the bill through committee. In September, the Senate Environment and Public Works committee approved S. 1733 — The Clean Energy Jobs and American Power Act — to go to the full floor of the Senate. Several committee hearings on the subject have been completed, and there now appears to be an understanding of what sort of bill could pass the Senate with 60 votes. Meanwhile, the EPA took initial steps to regulate GHG emissions through the Clean Air Act, and the judicial system accepted in principal that GHG emitters may be subject to public nuisance claims under tort law. As this article was prepared in early December, the U.S. administration was heading to Copenhagen to actively participate in the negotiations of a framework for a post – Kyoto Protocol agreement. 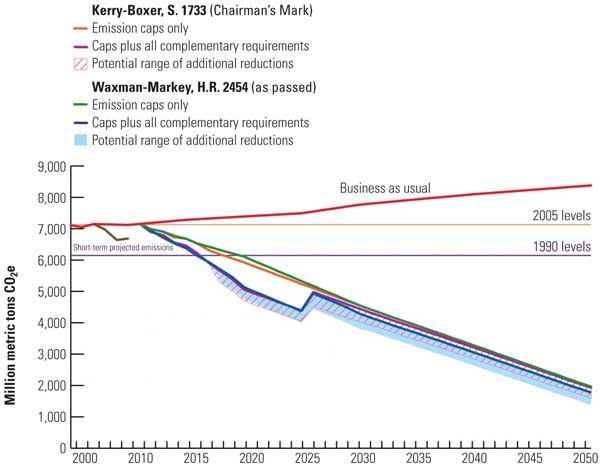 2. Emissions reductions 2005–2050 under cap-and-trade proposals in the 11th Congress, as of October 28, 2009. “Business as usual” emissions projects are from the EPA’s reference case for its analysis of the Waxman-Markey discussion draft. “Short-term projected emissions” represent the EIA’s most recent estimates of emissions for 2008–2010. The complete methodology, assumptions, and references are available at www.wri. org/usclimatetargets. Source: World Resources Institute

It is also worth noting that while there continues to be uncertainty about the exact timing of implementation, the near-term targets and mechanisms of a GHG emission reduction law and most of the bills under consideration are coalescing around the same long-term targets; most are economy-wide, and most use a cap-and-trade mechanism. This does provide industry some certainty regarding the long-term direction it needs to be headed in.

What to Do Now

The current pause in electricity demand growth will not be without its own challenges.

Under ordinary circumstances, given a period of slow or no growth in demand, utility company planners might be able to rest on their existing fleet, but these times are anything but ordinary. Utilities will need to navigate through uncertain regulatory, economic, and technological waters. They will need to make decisions without complete information. Despite all the uncertainties, there are several areas that utility companies can pursue, regardless of how the uncertainties play out:

Renewable sources of energy continue to be the choice du jour. NERC projects about 260,000 MW of renewable capacity will come online over the next 10 years — roughly 96% of that is expected to be composed of wind (229,000 MW) and solar (20,000 MW). Industry participants will be challenged with integrating these intermittent resources.

There will likely be another dash to natural gas – fired power plants because they have low capital costs and short construction schedules, they are relatively easy to permit, and they emit fewer GHG emissions than coal plants. Plus, natural gas supply appears, for the moment, to be abundant again, thanks to advances in extracting gas from shale and coal bed methane. The price is right, too: below $3 per million Btu in fall 2009.

Expansion of the natural gas fleet will be necessary to act as backup capacity for all the wind and solar capacity being installed.

If wind generation is added, as projected by NERC, then by 2018 net generation from wind would constitute about 14% of total generation, compared to just 1.3% in 2008. Although adding 229 GW of wind in 10 years is unlikely, mainly due to supply chain and transmission constraints, reaching that percentage may create challenges in maintaining system reliability. The expansion of intermittent resources, greater reliance on natural gas as a baseload power generator, and the application of new technologies may create a less-reliable and inherently riskier power system.

In the future, the U.S. will require additional sources of baseload generation. To that end, plans for a new generation of nuclear plants are progressing, with the first round seeking federal loan guarantees. In addition, several integrated gasification combined-cycle facilities and coal-fired generation plants with carbon capture and sequestration are moving forward. However, carbon control regulation in the form of federal legislation that places a value on carbon emissions is needed to create greater investment certainty in these technologies.

Perhaps the most conservative and most predictable place for power companies to focus is on plant improvement and energy efficiency projects for the time being.

Whereas 2009 was a year of transition and uncertainty for the U.S. power industry, 2010 will be a critical year that brings greater clarity and lays the foundation for the industry’s direction for decades to come.