In the late 1960s, the U.S. was facing an environmental crisis. Air pollution was a serious problem in cities across the country (see slideshow), industrial activities and the widespread use of hazardous pesticides were causing potentially dangerous chemical concentrations to be found in some soils, and the water quality in rivers and lakes was deteriorating. 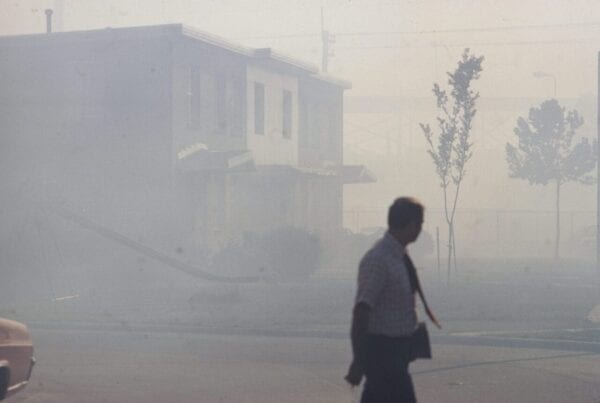 Concerning water pollution specifically, much of the trouble stemmed from municipal, agricultural, and industrial wastes. These wastes were commonly released into public waterways, and the cumulative effect had made some water sources unfit for drinking or swimming and an obvious hazard to wildlife.

A case in point was the Cuyahoga River, which runs through Cleveland, Ohio, and feeds into Lake Erie. The river had long been lined with manufacturing facilities, and according to some accounts, oil slicks could regularly be found on the water as a result of all the industrial activity. In fact, the oil was so prevalent that the river occasionally caught on fire. This reportedly occurred at least seven times during the 20th century. One such fire on June 22, 1969, gained national attention when TIME magazine published an article about the incident, which included a photo from a 1952 fire of even greater magnitude.

Another environmental eye-opener for many Americans occurred on Jan. 28, 1969, when an oil well off the coast of Santa Barbara, California, experienced a blowout. The event released about 3 million gallons of crude oil into the ocean, creating an oil slick about 35 miles long on the California coast. Images of black beaches, oil-soaked birds, and dead seals and dolphins washed up on shore outraged many environmentally conscious citizens across the country. President Richard Nixon, a native of California, took notice, surveying the damage by helicopter and visiting Santa Barbara’s oily beach in March 1969.

At the time, various land, water, and air management and control functions were handled by different federal entities, including the Department of Health, Education, and Welfare; Department of the Interior; Council on Environmental Quality; Atomic Energy Commission; Federal Radiation Council; and Department of Agriculture. Although the organizations did not turn a blind eye to environmental issues, it was clear that the disjointed arrangement was not helping the situation, and many environmental advocates were calling for change.

Nixon recognized the need to reorganize the government’s environmental efforts under one umbrella. With guidance provided by a six-member Advisory Council on Executive Organization, he proposed the creation of a new agency. “The Government’s environmentally-related activities have grown up piecemeal over the years. The time has come to organize them rationally and systematically,” Nixon wrote in a memo to Congress on July 9, 1970. “Our national government today is not structured to make a coordinated attack on the pollutants which debase the air we breathe, the water we drink, and the land that grows our food. Indeed, the present governmental structure for dealing with environmental pollution often defies effective and concerted action.”

Congress agreed, and the U.S. Environmental Protection Agency (EPA) was established on Dec. 2, 1970. When the EPA was formed, it was given broad responsibility for research, standard-setting, monitoring, and enforcement with regard to five environmental hazards: air pollution, water pollution, solid waste disposal, radiation, and pesticides.

Measures to Protect the Environment

In an announcement released two weeks after the EPA was created, William D. Ruckelshaus, the first administrator for the agency, wrote, “The job that must be done now to restore and preserve the quality of our air, water, and soil can only be accomplished if this new Federal agency works closely with industry and with other levels of government. The technology which has bulldozed its way across the environment must now be employed to remove impurities from the air, to restore vitality to our rivers and streams, to recycle the waste that is the ugly by-product of our prosperity. And municipal and state governments must do more than curb pollution where it occurs now; they must plan for healthy and balanced and pollution-free growth in the future.”

In the 50 years since the EPA’s creation, many notable actions have been taken to protect and restore the environment. Several laws have been passed including the Clean Air Act, Clean Water Act, Resource Conservation and Recovery Act, and Nuclear Waste Policy Act. The EPA has been behind the banning of several dangerous pesticides including DDT (dichloro-diphenyl-trichloroethane), and led the phaseout of lead gasoline, CFCs (chlorofluorocarbons), and PCBs (polychlorinated biphenyls).

Several rules and standards have been created including the National Ambient Air Quality Standards, Regional Haze Rule, Ground Water Rule, Cross-State Air Pollution Rule, and Mercury and Air Toxics Standards. The Clean Power Plan, Waters of the U.S. (WOTUS) Rule, and Paris Climate Accord were signed during the Obama administration. Notably, the Trump administration repealed the Clean Power Plan, rescinded the WOTUS Rule, and withdrew from the Paris agreement. Time will tell if a new administration reverses course yet again.

The results have been encouraging. From 1970 to 2019, the aggregate emissions of six common pollutants (particles, ozone, lead, carbon monoxide, nitrogen dioxide, and sulfur dioxide) decreased 77%, even as the U.S. population grew 60%, energy consumption increased 48%, and gross domestic product swelled 285%. The quality of water in rivers and lakes has also improved markedly over the years. While environmental issues are likely to remain a concern for eternity, the EPA has made a positive difference in the lives of Americans, and for that we should all be thankful. ■