A proposal to build a $45.8 billion fixed barrage across the Severn estuary, between Brean in England and Lavernock Point in Wales, suffered another blow in June as an influential UK parliamentary committee deemed a high-profile privately financed proposal unsatisfactory for environmental and economic reasons.

The plan submitted by Hafren Power would require government subsidies for decades to make it viable, said members of Parliament on the Energy and Climate Change Committee. Impacts on fish and flooding had also not been adequately assessed. Hafren Power CEO Tony Pryor had claimed the proposal could attract $38.16 billion in private investment and generate low-cost renewable power for the UK.

The Severn estuary, which opens to the Bristol Channel between southern Wales and Devonshire in southwestern England, has tidal variations of as much as 29 feet most of the year and almost 47 feet in springtime; only the Bay of Fundy in Canada has higher maximum tides. A number of studies had suggested that projects damming the estuary could produce as much as 5% of the country’s electricity (Figure 3). Since the 1920s, several large-scale concepts have been proposed to dam the estuary, including proposals for three barrages and two lagoon-type energy projects. The most high-profile of these was the 10-mile Cardiff-Weston barrage, costs for which had been initially estimated at £15 billion ($22 billion), but which doubled to more than £30 billion ($45.8 billion). 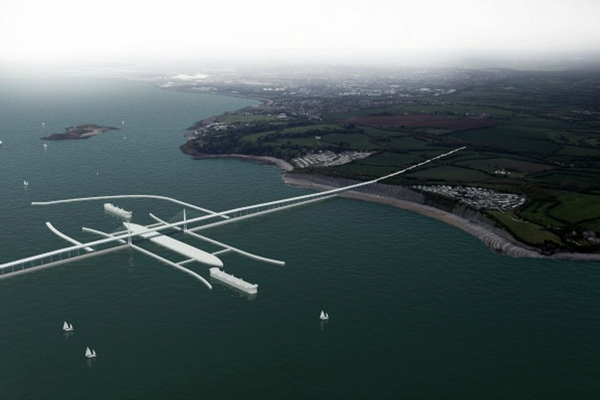 3. The barrage of hopes. An embattled and controversial project to build a 10-mile barrage across the Severn estuary in the UK was nixed by ministers in June. The proposed 30 billion euro ($45.8 billion) Severn Barrage could supply 5% of the UK’s power needs, supporters said. This image shows an artist’s rendering of the project. Courtesy: DECC

The UK government had in 2010 shelved plans to build the barrage with public funds, but a two-year-long feasibility study conducted by the Department of Energy and Climate Change (DECC) did not rule out a privately financed project. The agency warned, however, that potential environmental impacts of a barrage would have to be considered—particularly effects on fish, birds, and flooding. Impacts on navigation would also need consideration.

The demise of the Cardiff-Weston Severn Barrage doesn’t mean the end of hopes to use tidal power to generate substantial power in the UK. According to Evans Engineering, its REEF tidal power concept (which has now been endorsed by an Atkins-Rolls Royce report commissioned by the DECC) is “very much alive and well.” The company reports that “fresh enthusiasm and the prospect of major private finance is pushing this proposal.” Work at Evans is reportedly proceeding with forming a consortium.