March 11 marked the third anniversary of the magnitude 9.0 earthquake and subsequent tsunami that struck the east coast of Japan. Within days of that event, with no backup power, cooling systems failed at Tokyo Electric Power Co.’s (TEPCO’s) Fukushima Daiichi plant, leading to meltdowns and hydrogen explosions at Units 1, 2, and 3.

But little seems to have changed in Fukushima Prefecture, where 140,000 people are still under evacuation, or at Daiichi, where crews struggle to continue cleanup efforts.

A New Crisis at Daiichi

Exacerbating the situation is a contaminated groundwater crisis that began last April and has since significantly worsened. TEPCO has revealed contaminated groundwater has been leaking into the power station port, suggesting that the main source of the contamination is water in cable trenches that connect with circulation pumps near the shore, which became contaminated in March 2011. Prime Minister Shinzo Abe’s government has vowed a “proactive” role in resolving the issue, recently pledging an additional ¥47 billion in funding for countermeasures.

A basic policy proposed in November 2013 calls for a dedicated team to implement countermeasures, which include pumping out contaminated water from affected areas, paving the land with asphalt to prevent rainwater inflow, installing impermeable walls on the ocean side of the plant to prevent leakage into the port and sea, and installing “frozen-earth” impermeable walls on the land side to isolate groundwater flow from the contaminated area. 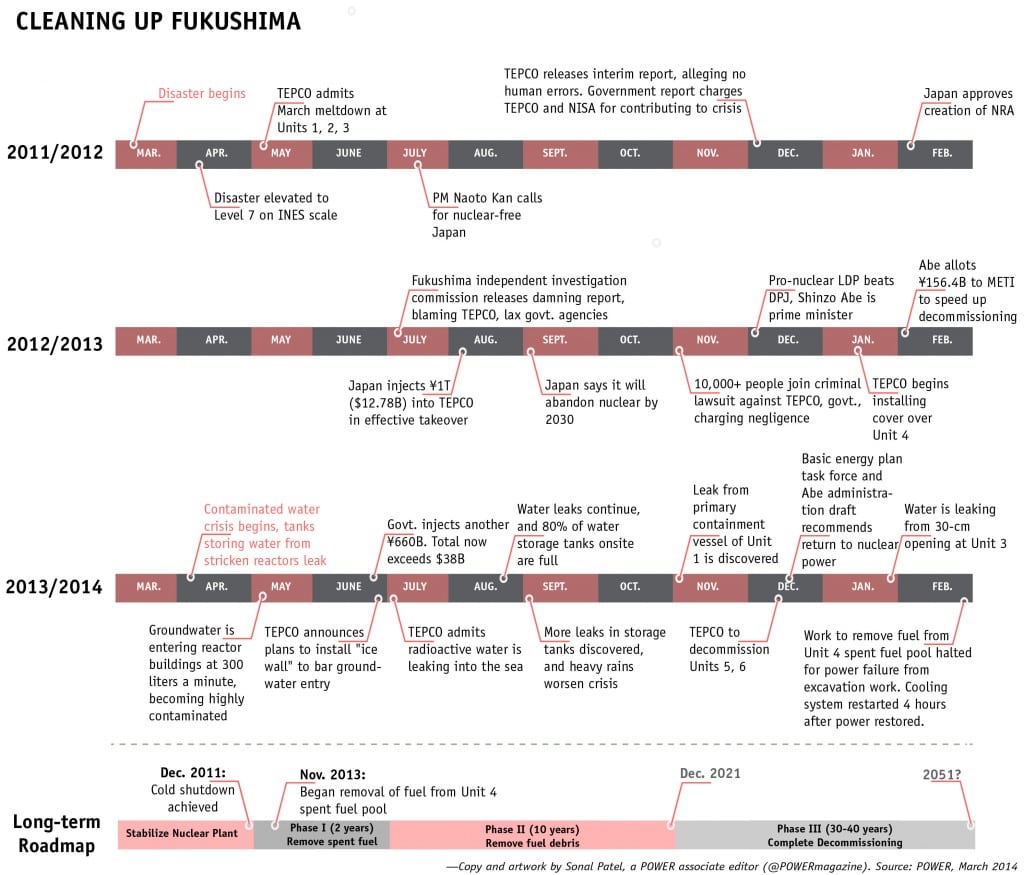 Geographically isolated Japan has always lacked natural resources, forcing it to rely on imported energy, but it is also a vocal global proponent for curbing greenhouse gases. The country has, in energy plans before the Fukushima disaster, promoted policies that strive for simultaneous achievement of the three Es: energy security, environment (or climate change mitigation), and economic efficiency (or lowering costs for energy). Nuclear was touted as its best option for achieving those goals.

But immediately following the Fukushima accident, despite the inoperability of several thermal plants, the country’s nuclear plants were shut down. Nuclear’s decline has been compensated for by thermal generation—which has climbed to 90% of total generation—and mainly by expensive imports of liquefied natural gas.

Despite the political firestorm about Japan’s nuclear future, the first energy policy since Fukushima being drafted by the administration of Prime Minister Abe suggests that nuclear, along with renewables and fossil fuels, will be integral to meeting Japan’s energy needs.

Three years after Fukushima, none of Japan’s 48 existing reactors are operating. The last ones, Ohi Units 3 and 4, were shut down in September 2013. Applications for restarts, which must be approved by the Nuclear Regulation Authority, are pending for just 17 reactors, but there is no consensus on how long the approval process could take. Some industry experts suggest reactors that have applied could be restarted within six months to a year.

Meanwhile, Japan’s energy import bills are surging, pushing the country to a record trade deficit in 2013. The most badly hit are the country’s 12 general and wholesale electric utilities, which are seeing crippling hikes in the total cost of power generation.