Under rules proposed by the Environmental Protection Agency (EPA) on June 2, 2014, existing fossil fuel–fired U.S. power plants must comply with state-specific goals to lower carbon pollution from the power sector by 2030, while modified and reconstructed power plants will be subject to technology-based performance standards.

The EPA’s “Clean Power Plan” rule affecting existing power plants seeks to cut carbon emissions from the power sector by 30% from 2005 levels by 2030. The rule specifically addresses power sector emissions because the EPA says power plants are the largest concentrated source of carbon dioxide emissions in the U.S., making up roughly one-third of all domestic greenhouse gas (GHG) emissions. Under the plan, by 2030, coal and gas will each constitute about 30% of the nation’s power mix.

Notably, by 2012, a 15% CO2 emissions cut relative to 2005 levels had already been achieved. Experts suggest that decline was due mostly to the economic recession and the emergence of cheap natural gas. According to the Energy Information Administration, without the EPA’s new rules, carbon emissions could rise 6% between 2014 and 2030.

The Clean Power Plan consists of two main parts: state goals (calculated as an emissions rate in pounds of CO2 per megawatt-hour) that must be achieved within a 10- to 15-year window after the rule is finalized, anticipated in June 2015, and guidelines to help states develop plans by June 2016 (with a one-year extension option) to meet those goals.

The rule essentially outlines four “building blocks” that, when combined as best achievable by each state, contribute to the best system of emissions reduction. 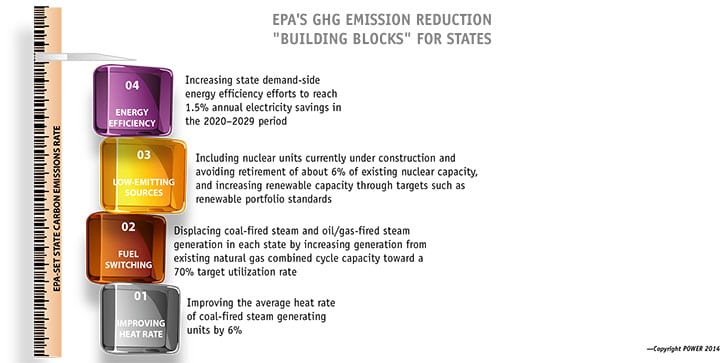 Proposed emission rate targets for most states (Vermont and the District of Columbia are exempted, as they have no fossil fuel plants) require a reduction of between 21% and 40% compared to 2012 power system emissions rates. The EPA said it took into account a state’s current energy situation as well as its capacity to achieve those targets. 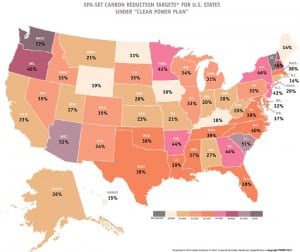 That’s why Washington state—which is on track to phase out TransAlta’s 1.5-GW coal-fired plant and become coal free between 2020 and 2025—will be required to slash its carbon emissions rate by a stunning 72%.

Two coal-fired plants on tribal lands in Arizona, a state that is required to make a 52% carbon rate reduction, aren’t included in the proposal, but the EPA singled out Arizona as having one of the highest energy efficiency resource standards in the U.S.

For South Carolina, a state that produces 30% of its power with coal but is also required to slash its emissions rate by more than half, the EPA cited decisions to build two new nuclear units at V.C. Summer. Georgia and Tennessee, two other states with reactors under construction, will be forced to reduce their rates by 44.4% and 38.9% respectively.

The EPA also said the proposal, which gives states the option to work individually or in regional groups, “ensures that states have the flexibility to choose the best set of cost-effective reductions for them.”