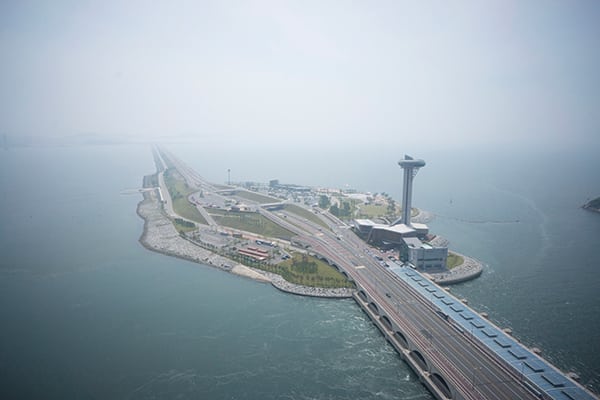 The world’s largest power-producing tidal barrage revitalized an unsuccessful manmade reservoir that was once known as “The Lake of Death.”

From space, the 12.7-kilometer (km) Sihwa Lake tidal barrage that houses a 400-meter (m)-long tidal power plant looks like a delicate strand stretched across one of many bays and inlets characterizing the craggy coastline of Gyeonggi Bay in the Korean Peninsula’s northwestern region. On site, however, there is no question that the 254-MW tidal power plant designed to reap energy from the highest tides in the vast Yellow Sea is a marvel of engineering.

That’s why it’s curious that the $355 million tidal power plant—the first of its kind in South Korea, and the largest in the world since construction of France’s 240-MW La Rance tidal power plant in 1965—was conceived as an afterthought.

In 1994, South Korea created the 56.5-square-kilometer (km2) freshwater Lake Sihwa by constructing a 12.7-km dike between Oido Island in Siheung city and Daebudo Island in Ansan city to secure agricultural and irrigation water, and to reclaim 173 km2 of land near the local metropolitan areas of three cities surrounding the lake.

But within years after the embankment was built, it was apparent that without seawater circulation, Lake Sihwa—which is about the size of Manhattan Island—was seeing an inordinate inflow of polluted wastewater from a nearby industrial complex. The pollution severely contaminated the basin and made it unusable as a freshwater reservoir, as intended. By 1997, partly driven by a pollution scandal that dubbed Sihwa “The Lake of Death,” officials were forced to reformulate their plans, opening a sluice to allow seawater to regularly flush the basin. 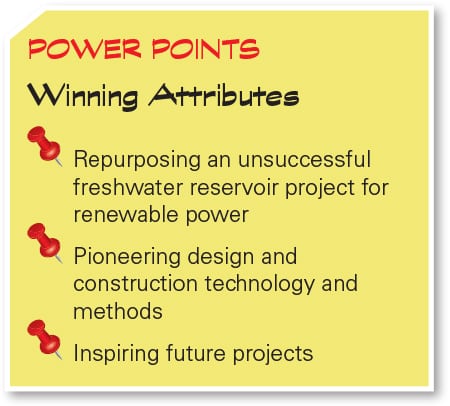 That move prompted South Korean governmental water authority Korea Water Resources Corp. (then KOWACO, and recently renamed K-water) to step in and propose a tidal power barrage that uses a single-effect flood generation method and allows up to 60 billion tons of seawater to be circulated annually.

By December 2002, the project was approved, and precisely two years later, in 2004, construction began. Seven years after that, in December 2011, K-water’s Sihwa Lake tidal power plant was connected to the grid, equipped with 10 bulb-type generator units (each 25.4 MW) that produce about 552.7 GWh annually.

Today, the plant is housed in the concrete seawall that bridges two “eco-park” areas. One half of the bridge is taken up by the 10 generating units, and the other half, by eight culvert-type sluice gates, seen in the foreground of the opening photo. The tidal units essentially produce power by exploiting the gap in the water level between the sea and Lake Sihwa. As the tide rises, saltwater flows through the turbines from the Yellow Sea and into Lake Sihwa, creating electricity. But at low tide, the gates are raised and the turbines revert to sluicing mode, allowing the lake to be emptied and no electricity to be produced.

According to Daewoo Engineering & Construction Co., the international firm that won the engineering, construction, and procurement contract, construction of the project entailed about a dozen key stages. After silt protection was ensured, a temporary circular cell cofferdam was installed and diversion roads were built. Then, the temporary basin that the cofferdam created was drained and excavated for dry work, and the main concrete structures for the turbines and sluices were built. After a gantry crane was erected as a temporary wharf, the turbines were transported by a special carrier and installed. New roads were then built over the sluice gates, after which the diversion roads and cofferdam were removed, and the turbines were tested (Figure 1).

The unique project required unique solutions, noted Andritz Hydro, the Austrian engineering group contracted to provide detailed engineering and supply core components for the turbines and some generator parts. The three-blade turbine design with a runner diameter of 7.5 m may look like a conventional bulb-type unit at first sight, but it has key differences, said the company. For one, it uses “very high and continuous variation of available heads.” It also enables a high number of starts and stops and reverse mode operation (sluicing), it said.

The basic concept of the turbines and generators were derived from Verbund’s 1992-built Freudenau hydropower plant on the Danube River in Austria. “Usually, tidal power plants generate energy in both directions—from sea to lake and from lake to sea. In this specific case, energy is generated only at high tide (from sea to lake),” Andritz explained. Since the embankment was first built, several buildings have been erected on the lake’s shores. “Therefore, as a consequence, the lake may only reach a maximum level of –1.0 meters. Thus, power generation from lake to sea is not economical anymore, because the turbines cannot be optimized for one direction of flow.”

According to Andritz, one challenge that was immediately apparent concerned protecting impinged parts from salt corrosion. The company resolved that concern by covering vulnerable parts with a cathodic protection system. Then it had to come up with the most efficient way to produce power from changing tidal ranges (which depend on a number of factors, including moon phases, the sun, and seasons) and lake volumes. “Contrary to run-of-river plants, this tidal power plant is started twice a day and runs in sluicing mode,” Andritz said. It required a “sophisticated programming of the power plant control,” the company said.

Construction of the project proved just as cumbersome. Work needed to progress simultaneously at each of the 10 units, requiring an assortment of resources and careful time management. Andritz recalled that due to the tides there were restricted periods for wet commissioning, for example.

And because it is one of the first of its kind, plant operator K-water is continually finding new ways to handle problems. One challenge encountered just months after operation began was the realization that when the turbines were paused while the tide was out, they quickly accumulated marine life growth that affected performance significantly. Frequent cleaning resolved that quickly, however.

Now in its fourth year of operation, the unique plant has continued to restore the Lake Sihwa ecosystem and water quality by allowing seawater exchange while producing power. But it has also spawned similar projects in South Korea, a country whose energy emphasis has shifted subtly toward renewables in long-term energy plans.

To reap the large tides in the Yellow Sea off the country’s western coast, the Ministry of Land, Transport, and Maritime Affairs; Korea Hydro and Nuclear Power; and GS Engineering & Construction are gearing up to build a 1,320-MW tidal power plant on Incheon Bay about 60 km north of Lake Sihwa. Korea Midland Power Corp. is also mulling plans to build a 420-MW barrage even farther north.

For K-water, the company that manages half of the national water supply and wants to expand into renewable energy, the project has actualized a goal to transform conventional water management. Perhaps, it told POWER, the plant is the “dynamic force” that will drive South Korea’s green growth. ■