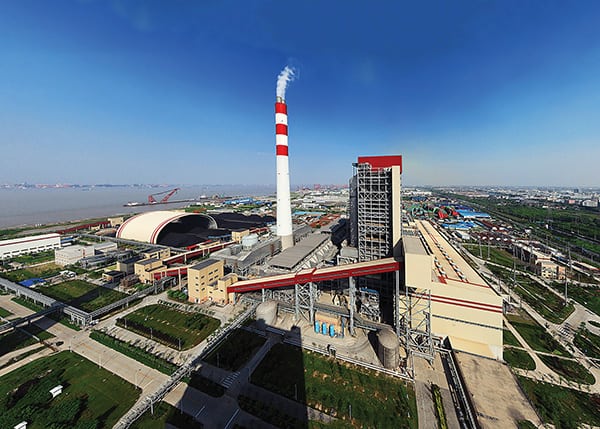 In a nation seeing breakneck growth in its power sector and a drive toward cleaner, more efficient generation, coal remains the backbone. That means hard work is ahead for China in power sector innovation, and a plant in Shanghai is leading the way.

There is no country on earth that has seen growth in its power sector like China. Whether it’s renewables such as solar, wind, and hydropower (where it has led the world in new capacity additions for years); nuclear (it has 24 reactors under construction); or conventional thermal generation, China has been adding capacity at an astonishing pace to stay ahead of equally dramatic growth in demand. China now possesses the world’s largest installed generating base, having recently passed the U.S. According to data from the China Electricity Council, in 2014 alone China added an incredible 101 GW of capacity, more than the total installed capacity of all but about 10 other nations worldwide.

But it’s not just a matter of adding new generation. China is also facing serious challenges from air pollution, much of it stemming from the nation’s traditional heavy reliance on coal. Though China is making a concerted effort to transition to lower-carbon power and reduce its coal consumption, coal will remain a major source of electricity for the foreseeable future—around 116 GW of coal capacity is currently under construction. All this means that major efforts are necessary to improve efficiency and reduce emissions if the nation is to reduce air pollution and meet its ambitious commitments toward carbon dioxide (CO2) reductions.

Though much of China’s air pollution problems stem from old, inefficient coal plants without modern emissions controls, the nation has a substantial fleet of advanced supercritical and ultra-supercritical generating plants. Yet even these facilities are being called upon to make improvements. Many have upgraded their emissions controls and made changes to improve efficiency. But one plant in Shanghai has gone above and beyond even that.

The Waigaoqiao Power Base in Shanghai has a 5-GW total capacity with eight units in the Pudong New Area on the banks of the Yangtze River. The individual units were constructed in three phases and are operated by three independent companies.

Development of Phase 1 of the project, comprising four 300-MW units supplied by Shanghai Electric, began in the early 1990s, with the units coming online between 1994 and 1997. Phase 2, comprising two 900-MW supercritical units—some of the first in China—with technology from Alstom, Siemens, and Hitachi, began construction in 2001 and entered operations in 2004.

But with the dust from Phase 2 barely settled, it was time for something even bigger—what would be the most advanced and efficient coal-fired plant in China.

As an ultra-supercritical plant, Waigaoqiao No. 3 operates with main steam temperatures of at least 600C and pressures up to 4,000 psi. When it first came online, it operated at 42.73% net efficiency, making it one of the most efficient coal plants in the world. But that was only the start.

From the beginning, the project team made a commitment to implement the central government’s call to focus on efficiency improvement, emissions reduction, and technological advancements in power generation. The plant staff and management launched numerous scientific and technological innovation projects and developed a series of new technologies for system optimization and efficiency improvement. Many of these initiatives were carried out simultaneously with plant construction, and research and development of new technologies have continued. This has resulted in substantial improvements in plant performance since initial commissioning.

Following are some of the key improvements Waigaoqiao No. 3 has installed.

Flue Gas Heat Recovery. A new type of finned heat exchanger was developed and installed in the low ash zone of the FGD between the booster fan and the FGD tower, which reduces abrasion and the risk of ash accumulation and blockage. In addition to waste heat in the flue gas, heat generated by the induced fan and the booster fan is also recovered. That heat is transferred to the condensate, so steam extraction can be reduced, thus improving the turbine heat rate. The reduced heat rate of the turbine offsets the power consumption of the FGD system.

Generalized Regeneration Technologies. These technologies expand the regeneration medium from classical feedwater to water, air, and coal. The air regeneration system matches extracted steam to the air preheaters to heat the air entering the boiler, which recovers energy from the extracted steam and improves the boiler combustion efficiency. The coal powder regeneration system further dries and heats the coal powder at the outlet of the mills, improving combustion stability and efficiency, especially when high-moisture coal is used. These technologies not only benefit the boiler’s combustion and operation but also improve unit efficiency by recovering heat from extractions and reducing heat loss in the condensers.

Improved Feedwater Regeneration. An additional adjustable high-pressure steam extraction point was added to maintain the final feedwater temperature, or at least minimize the temperature drop, during low-load operation. In addition, the temperature drop of the flue gas downstream of the boiler economizer at low-load conditions can be reduced so that the SCR need not be shut down at low loads. Also, the fast response of the extraction steam pressure by the control valve means that the unit frequency response is faster. The higher air and feedwater temperatures at the waterwall inlet during low operation improve combustion stability and efficiency as well as water dynamics.

Improved Boiler Startup. This technology primarily uses steam in place of oil to heat up the boiler. The feedwater of the startup unit can be heated by steam from elsewhere in the power plant, and the boiler can then be warmed by the heated feedwater and the evaporated steam from the separator. When boiler fans start, the cold air is heated by the hot economizer; then the hot air heats the cold air from the flue gas side in the air preheater, establishing a “hot furnace and hot air” condition before ignition. This approach speeds up startup, reduces auxiliary load, and reduces fuel consumption and, thus, emissions. Waigaoqiao No. 3’s startup time is less than 2 hours (including cold startup), oil consumption is less than 15 tons, power consumption is less than 80,000 kWh, and coal consumption is less than 200 tons (including the steam used for heating).

Prevention of Solid Particle Erosion. Oxidation of steam-side components and subsequent production of oxide particles has been a serious problem for supercritical and ultra-supercritical units all over the world for decades, in some cases resulting in boiler tube explosions and serious turbine damage. Some Chinese plants have experienced efficiency losses of 8% or more in their first few years of operation as a result. Waigaoqiao No. 3 was designed to reduce the occurrence of oxidation and to clear oxide particles from boiler tubes as quickly as possible using optimized startup and operation procedures. Inspections after 60 months of operation showed virtually no oxidation of boiler tubes and no erosion of the turbine blades.

Waigaoqiao No. 3’s innovations have led to a long list of awards for efficiency gains and emissions reductions from government and industry groups. The technologies that have been developed are being implemented in new plants currently under construction, and the plant staff and management have shared their innovations with industry groups from around the world.

China still has much work ahead of it, but plants like Waigaoqiao No. 3 are leading the way toward a cleaner, more efficient Chinese power sector. ■