NTE Energy on May 21 inaugurated the new Middletown Energy Center in Middletown, Ohio, the latest in a series of natural gas-fired power plants the Florida-based company is developing in Ohio, Texas, and North and South Carolina. NTE touts the 525-MW Middletown combined cycle facility as among the most efficient gas-fired power plants in the U.S., in part because heat from the power generation process will be used to create steam to drive an additional steam turbine at the plant. 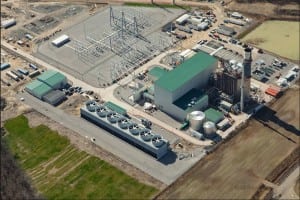 The Middletown Energy Center in Middletown, Ohio, was inaugurated May 21, 2018. The natural gas-fired facility is among several projects either online or being developed by Florida-based NTE Energy. Courtesy: NTE Energy

The Middletown plant is among several new gas-fired power plants being developed in Ohio, in the heart of the gas-rich Marcellus Shale. At least 11 natural gas-fired power plants have either been recently built, are under construction, or in development in Ohio, a state gaining gas generation capacity at the same time it is losing generation from coal-fueled and nuclear plants.

Coal-fired generation accounted for about 85% of the state’s electricity production just more than a decade ago. State data shows that coal’s share will drop below 60% this year.