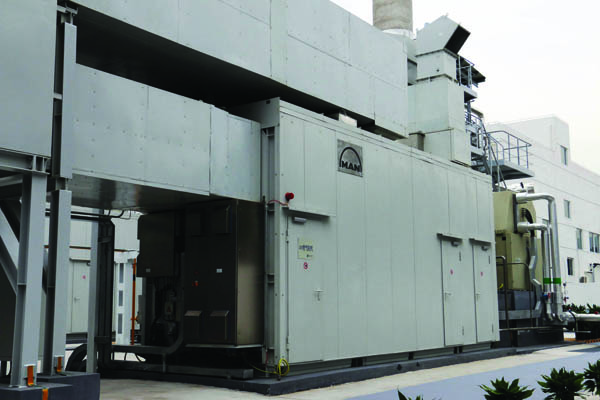 Combined heat and power (CHP) has long been a popular option for industrial self-generation, but new technologies and business partnerships are taking the sector well beyond the traditional boilers and diesel gensets.

The Erving Paper Mill in the western Massachusetts town of the same name has operated for more than 100 years. Once part of a thriving industry, it’s now one of a few remaining New England paper mills still clinging to life. Battered by foreign competition, paper mills like Erving have continued operating by finding profitable niches (Erving supplies products like recycled napkins to the food service industry) and keeping costs as low as possible.

Opting for modern self-generation is one way the mill has helped safeguard its role as one of the town’s largest employers. Paper mills have long relied on captive combined heat and power (CHP) plants, often fired by waste materials, but these aging boilers are drawing attention from environmental regulators concerned about emissions. Erving had a small fuel oil–fired boiler and steam turbine, but this old system was no longer sufficient even after being converted to natural gas. The mill needed to improve the reliability of its power and steam supply while increasing its energy efficiency and reducing overall energy costs.

In 2014, the mill turned to New Hampshire–based Waldron Engineering & Construction, which partnered with Maine firm Engineered Construction Services to supply a new gas-fired, gas turbine–based CHP plant (Figure 1). Built around a dual-fuel Solar Taurus 60 turbine and a 600-psig heat recovery steam generator (HRSG) equipped with Honeywell Eclipse duct burners, the plant now supplies most of the mill’s power and all of its process steam. Emissions are kept low by a selective catalytic reduction system.

The plant completed testing and entered operations this past October, having met all the mill’s targets for improving costs and efficiency. Waldron Engineering CEO Terry Waldron told POWER that the improvements in efficiency also earned the mill rebates from the utility and state.

One wrinkle with Erving’s CHP plant is that it relies on compressed natural gas delivered by tanker trunk instead of a pipeline hook-up. Storing fuel on site insulates it from disruptions in the local natural gas system, a problem New England has experienced during recent winters (see “New England Struggles with Gas Supply Bottlenecks” in the June 2013 issue). When necessary, it can also operate on ultra-low-sulfur fuel oil.

The industrial sector has long been a strong proponent of CHP generation. Though CHP makes up a small fraction of total U.S. electric power generation, the overwhelming majority of industrial and commercial generation (about 85% as of 2012, according to the Energy Information Administration [EIA]) incorporates CHP. This has traditionally been because some of the largest industrial loads also have very large needs for process heat and steam. Chemical plants, petroleum refining, and paper processing remain the largest users of CHP, with significant demand also coming from food processing, breweries, and biofuel producers.

But the sector is no longer as staid and settled as it once was. Many of the trends that have remade the wholesale electric power sector have also reached into industrial CHP. While total industrial generation has changed little since 2005, according to the EIA, the relative percentages of fuels used have changed quite a bit. Between 2005 and 2014, coal use fell 33% and fuel oil use plummeted more than 85%, while natural gas use grew by 17%, rising from 50% of the total in 2005 to 60% in 2014. The use of waste products, biomass, biogas, and similar fuels has fluctuated but remains close to 2005 levels as the second-most-common source of energy. As with the power sector at large, falling natural gas prices and tightening emissions standards have been the main drivers.

Such shifts are also taking place globally. China has been struggling for years with endemic air pollution in major cities like Shanghai, and the nation’s traditional heavy reliance on coal has been challenged head-on by new government policies seeking to cut emissions, reduce the carbon intensity of the power sector, and meet the nation’s ambitious goals under the Paris climate agreement. While major advanced coal plants and China’s massive build-out of its nuclear and renewables capacity have grabbed headlines, industrial generation is feeling the same pressures. Much of China’s pollution problems stem from thousands of small, inefficient coal boilers that the government has moved to shut down. But those generation sources have to be replaced with something.

One example can be found in the SAIC Volkswagen Automotive Co. factory in Anting, northwest of Shanghai. SAIC Volkswagen was founded in 1984 as a joint venture between Volkswagen Group and China’s SAIC Motor Corp. The facility, one of the largest in the country, manufactures automobiles for the Chinese market under the Volkswagen and Škoda marks.

The new CHP plant, supplied by MAN Diesel & Turbo, a member of the Volkswagen Group, comprises four MGT 6200 gas turbines with a combined total output of 26.5 MW (see Figure 2 and the header photo). The plant produces 60 tons/hour of steam and 4.42 MWt of hot water. This is enough to supply 100% of the electricity needs of Car Plant 3 and a neighboring gearbox plant, and most of their process steam (the balance is supplied by auxiliary gas-fired boilers).

India is also working to improve its air quality and move away from dependence on coal and fuel oil (see “India Refocuses Coal Future” in the November 2015 issue). Like China, its industrial base relies on numerous small diesel gensets and coal-fired boilers. But that, too, is beginning to change. Kanodia Technoplast, outside the capital of Delhi, supplies a variety of packaging materials domestically and internationally and is typical of the many companies that have sprung up as part of India’s economic boom since the 1990s. In an effort to reduce power costs and improve reliability at its Kundli plant, it recently installed a gas-fired GE Jenbacher trigeneration system supplied by Clarke Energy. The 1.5-MWe system provides 1.4 MW of electricity as well as 450 kW of heat for the thermic fluid used in the plant and 200 tons/hour of refrigeration. The plant had previously suffered from frequent outages on the local grid.

Meanwhile, in Saudi Arabia, most industrial CHP is fired by crude oil—despite the country’s large gas reserves—because of constraints on the domestic gas market. But a shift toward gas is under way there as well. In December, ENGIE and Doosan announced a partnership to build a $900 million CHP plant at the Fadhili gas plant, 85 kilometers northwest of the Jubail Industrial port in Saudi Arabia’s eastern province. The Fadhili gas plant is itself part of the kingdom’s multi-billion-dollar initiative to make more natural gas available for power generation. The 2.5-Bcf/day gas-processing plant is expected to come online by the end of 2019 and will cost a staggering $13.3 billion altogether. The 1,500-MW Fadhili Combined Cycle Plant will supply 400 MW of its output, plus process steam, to the gas plant beginning in November 2019, while the remainder of the power goes to the national grid.

The same technologies that are being used to improve efficiency and output in the larger power sector are coming to industrial CHP as well. GE has been pushing hard to deploy its “digital power plant” solutions to large grid-connected facilities (see “Big Data and the Industrial Internet Meet the Power Plant” in the January 2016 issue and “Disruptive Digital Technologies Are Key to Power Industry’s Future” in the June 2016 issue), but some of the same tools can also be applied to smaller distributed generation.

GE announced in November 2016 that it was working with Clarke Energy to deploy its Predix-based Asset Performance Management (APM) software across Clarke’s installed base of 3,300 Jenbacher gas and diesel engines in 19 countries, representing 5.4 GW of capacity, much of it incorporating CHP (Figure 3). Clarke is a major service provider for Jenbacher engines, and according to GE, the APM software will enable collection of performance data across the fleet. Rather than reacting to outages, the software can predict potential problems before they occur, thus reducing downtime and repair costs. Using APM, a substantial amount of diagnosis and troubleshooting can occur remotely.

One CHP-specific deployment of APM recently came in the Netherlands, where a tomato greenhouse growers’ collective is using it to remotely monitor 50 Jenbacher cogeneration plants (150 MW in total) that provide power and heat to the group’s 40 greenhouses. The greenhouses also recover carbon dioxide from the engine exhaust and use it to enhance plant growth. This is an approach GE first used at a tomato-growing operation in California in 2013 (see “Reciprocating Engines Expand Roles” in the September 2014 issue).

While large-to-very-large industrial CHP facilities continue to be built, for smaller applications, fully integrated turnkey systems that combine generation and heat recovery into one unit are carving out a growing segment of the market. One niche is farms and wastewater treatment plants, where these containerized units can be connected directly to onsite biogas streams (for more on this approach, see “CHP 2.0: New Fuels and New Business Models” in this issue).

Capstone’s microturbines have been deployed in CHP applications for decades, with the turbine exhaust being directed into a boiler or HRSG in the conventional cogeneration approach. But the company also recently began offering turnkey microturbine packages with integrated heat recovery modules (HRMs) that generate hot water or steam without any additional equipment. Capstone recently sold one of its new 1-MW, five-turbine C1000S systems (Figure 4) with HRMs to a major food processing facility in New York. The new C1000S will offset the use of existing gas-fired boilers and improve the facility’s energy efficiency, which made it eligible for support from New York’s Clean Energy Fund.

The growth of technology options and abundance of inexpensive natural gas is also drawing a variety of new participants into the industrial CHP arena. One example is Chesapeake Utilities Corp. (not affiliated with Chesapeake Energy), a natural gas local distribution company with operations in Maryland, Florida, and Texas, which recently built its first CHP plant on Amelia Island, Fla. Chesapeake’s subsidiary Florida Public Utilities (FPU) has about 31,000 electric distribution customers in northern Florida. One of its partners, Rayonier Advanced Materials, a manufacturer of cellulose products, has a small boiler plant in its facility on Amelia Island that sells excess power to FPU. Rayonier wanted to boost the flexibility of its operations and reduce its energy costs, while FPU wanted to improve reliability of its power supplies on Amelia Island.

The two companies agreed to build a 20-MW CHP plant at the Rayonier facility. Powered by a Solar Titan 250 gas turbine and a Rentech HRSG, the $40 million Eight Flags Energy CHP Plant broke ground in March 2015. It began producing power in June 2016 and supplying steam and hot water to the plant in July. The electricity, meeting about 50% of Amelia Island’s demand, is purchased by FPU for its retail customers under a power purchase agreement, which FPU estimates will save the utility about $28 million over the 20-year term.

“This new facility not only benefits both companies’ stockholders but it also provides significant value to the residents of Amelia Island through more dependable and cost-effective electric service,” Paul Boynton, Rayonier’s chairman, president, and CEO said. “Chesapeake and FPU have proven to be great partners and Rayonier Advanced Materials is excited to be an integral part of their combined heat and power plant project.”■