Ocean Power Technologies Inc. (OPT) announced on Feb. 1 that it had successfully deployed one of its PowerBuoy wave energy devices about a mile offshore from a U.S. Marine Corps Base on the island of Oahu in Hawaii (Figure 5). The device generates up to 40 kW of power from the rise and fall of waves, and since its deployment in December 2009, it has been generating power within specifications. 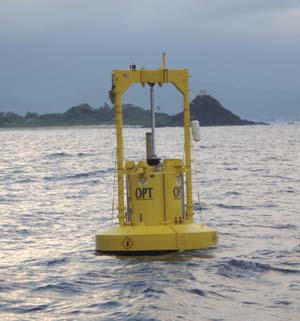 OCT built and will operate the device as part of a program with the U.S. Navy, which is testing OPT’s wave power technology. (To comply with Executive Order 13423, federal agencies must ensure that at least half of all renewable energy required under the Energy Policy Act of 2005 comes from new renewable sources developed after January 1, 1999.) The company has been awarded $380,000 for the PowerBuoy’s commissioning and in-ocean operation.

Last November, OPT announced the completion of trials of its Underwater Substation Pod (USP) in waters off Spain. The USP is designed to help collect and network power and data generated by up to 10 of its PowerBuoys for transmission to a shore-based electricity grid by one subsea power cable.

The OPT test is part of a growing drive to harness ocean energy for renewable power. In late November 2009, Aquamarine Power launched what it said was the world’s largest working wave energy device, known as the "Oyster" at the European Marine Energy Centre in Orkney, Scotland (see Global Monitor, Dec. 2009 online). Meanwhile, in Norway, Statkraft has opened the world’s first osmotic power prototype, which generates power by exploiting the energy available when freshwater and seawater are mixed (see Global Monitor, Feb. 2010).

A new report from Pike Research concludes that if the hydrokinetic trials now under way globally succeed, the ocean could yield as much as 200 GW of power by 2025. If these pioneering projects do not prove feasible, however, marine renewable energy might reach no more than 25 GW global capacity by 2025. The report assesses the market potential for five types of marine and hydrokinetic energy technologies: ocean wave, tidal stream, river hydrokinetic, ocean current, and ocean thermal energy. It notes that these technologies are "On the verge of widespread commercialization, with the U.K., U.S., and Canada in the lead."