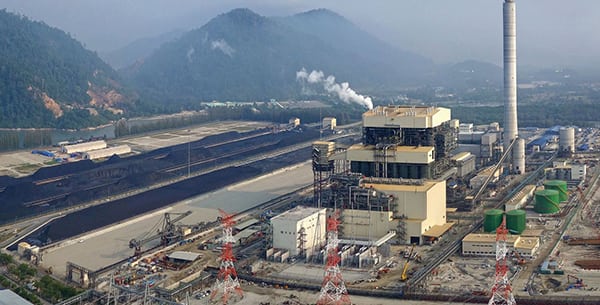 Ultrasupercritical technology is the current gold standard for coal-fired plants, but Malaysian national utility Tenaga Nasional Berhad had some unique requirements for its newest, most efficient plant. With a client lacking an indigenous source of coal and needing wide fuel flexibility, Alstom delivered a state-of-the-art plant that can handle an enormous variety of coals.

Like many of its neighbors in Southeast Asia, Malaysia has seen several decades of strong—if sometimes inconsistent—growth, accompanied by a dramatic expansion of its middle class. According to statistics from the World Bank, the nation’s economy has seen better than 5% growth per year since 2000, interrupted only by the 2009 financial crisis. Its per-capita gross domestic product was a respectable $10,829 in 2014, ranking 46th worldwide and third in Southeast Asia.

Malaysia’s economy is primarily export-based, centered around its large oil and gas reserves as well as minerals and agricultural products. What Malaysia does not have, however, is coal. Unlike its neighbor Indonesia, Malaysia must import all the coal its economy uses. Thus, it might come as a surprise that coal is still a major element of the fuel mix: The nation got 44% of its electricity from coal in 2011, according to statistics from the national utility Tenaga Nasional Berhad (TNB).

Being dependent on imports has not deterred the country from expanding its coal capacity, because the economics of burning coal in a country that exports natural gas are dependent on market values for both. As gas increases in price, it can be more profitable to export gas in liquefied form and replace it with imported coal for the power mix than it would be to burn gas to produce electricity and forgo importing coal. Still, this makes the nation vulnerable to fluctuations in the price and availability of coal.

Thus, Malaysia has maintained a government policy in favor of a diverse fuel mix: gas, coal, fuel oil, and hydroelectric (though the latter makes up only around 5% to 6% of the total). In addition, there has been a drive to improve efficiency in the coal power sector, with a focus on modern ultrasupercritical technology.

The Manjung site, on reclaimed land off the western coast of the state of Perak, around 10 kilometers (km) south of Lumut and 288 km north of Kuala Lumpur, was chosen as the location for a three-unit 2,100-MW coal plant that came online in 2003. That plant was built by Alstom, and when TNB subsidiary Janamanjung Sdn Bhd was ready to expand it with the region’s first ultrasupercritical coal plant, it turned again to Alstom and its consortium partner China National Machinery Import and Export Corp. (CMC). CMC selected Black & Veatch to provide engineering services and procure major balance-of-plant equipment and systems.

The contract for the 1-GW plant was awarded in March 2011, and site work began in June. Despite the size and complexity of the plant, as well as the geotechnical work necessary to build a large power plant on reclaimed land, Manjung Unit 4 completed construction on schedule in March 2015 and reached commercial operation in April.

One of the key specifications for the project was that it be able to burn a wide variety of coals. While this meant some efficiency trade-off, it would allow it to take advantage of market fluctuations and ensure reliable and competitive operation no matter what coal might be available. The contract, in fact, specified 15 different coals, including Australian, Chinese, and South African.

Manjung 4 incorporates a variety of advanced technologies to operate at a main steam temperature of 600C and pressures above 4,000 psi. The boiler is a once-through, sliding-pressure, vertical-tube furnace wall, two-fireball, two-pass design equipped with Alstom’s low-NOx tangential firing system. The vertical tube design incorporates rifled tubing and orifices to distribute fluid flow to the furnace wall tubes in proportion to tube heat absorption. Rifled tubing spins the water/steam mixture traveling within the boiler tubes, throwing the water onto the tube surface to aid cooling. Tubes in the center of the wall receive more heat and require more cooling, so proper fluid distribution reduces temperature differentials and stress within the furnace wall.

Sliding-pressure operation allows the plant to operate more efficiently at part load—the plant can ramp down to as low as 300 MW. This mode reduces the boiler pressure as load decreases, minimizing throttle valve energy losses and helping maintain high steam temperature to the turbine. This also reduces thermal stress during cycling.

The firing system uses two adjacent firing circles, creating two fireballs. Fuel and air nozzles can be tilted to control the reheat temperature without the need for spray desuperheating. A separated overfire air (SOFA) windbox is located above the main windbox to optimize air staging and minimize NOx emissions. Each SOFA windbox contains six separate air nozzles, all of which are both vertically and horizontally adjustable. This highly adjustable combustion system allows for control of fuel and air conditions to suit many different types of coal, thus maximizing combustion efficiency while maintaining low emissions, particularly NOx.

Though the design features necessary to handle such a wide variety of fuels result in lower overall efficiency compared to other ultrasupercritical plants, Manjung 4 still achieves nearly 40% efficiency, making it the most efficient coal-fired plant in Southeast Asia. Compared to Units 1–3, it generates 14% more power per metric ton of coal burned. Manjung 4’s other operating parameters are shown in Table 1.

Like Units 1–3, Manjung 4 uses seawater flue gas desulfurization (FGD). About 20% of the seawater drawn for plant cooling is used in the FGD system, and the system can absorb more than 90% of SO2 emissions. The FGD effluent is mixed with cooling water exiting the plant, treated to increase the dissolved oxygen, and returned to the ocean. Though this process results in a slight increase in sulfate content of the seawater, as well as lowering the pH, the effluent is well within environmental standards and creates no harmful by-products. SO2 emissions are below 200 mg/Nm3 and NOx emissions are below 500 mg/Nm3.

Unlike the other units, however, which rely on electrostatic precipitators (ESPs) for particulate control, Manjung 4 uses an Alstom Optipulse pulse-jet fabric filter system that keeps particulate emissions below 50 mg/Nm3. Again, this was dictated by the wide variety of coal types the plant may be called upon to burn, which was too wide for optimal performance of an ESP.

Since coming online, the plant has exceeded expectations, achieving 2% higher output and heat rate than specified. The plant has given TNB a tool to maintain reliability despite continual fluctuations in the regional coal market.

Further expansions of the Manjung site are under way. A fifth unit, the ultrasupercritical 1,000-MW Manjung Unit 5, is under construction by a consortium composed of Sumitomo and Daelim Industrial Co. and is expected to begin operations in late 2017. ■