Speaking at the Energy Storage North America (ESNA) conference in San Diego on Oct. 12, Garrett Fitzgerald, senior associate with the Rocky Mountain Institute (RMI), was frank about the challenge facing energy storage technologies: They’re starting to get well ahead of the regulatory regimes that are needed to make them work economically.

The RMI recently released a study showing that the economics of storage are often handicapped by rate structures and market restrictions that interfere with their ability to capture all the value a storage system is capable of providing. It also argued that behind-the-meter systems offer the greatest potential, because grid-connected utility storage cannot offer services that often motivate commercial and residential deployments, such as backup power and demand-charge reduction (Figure 1). 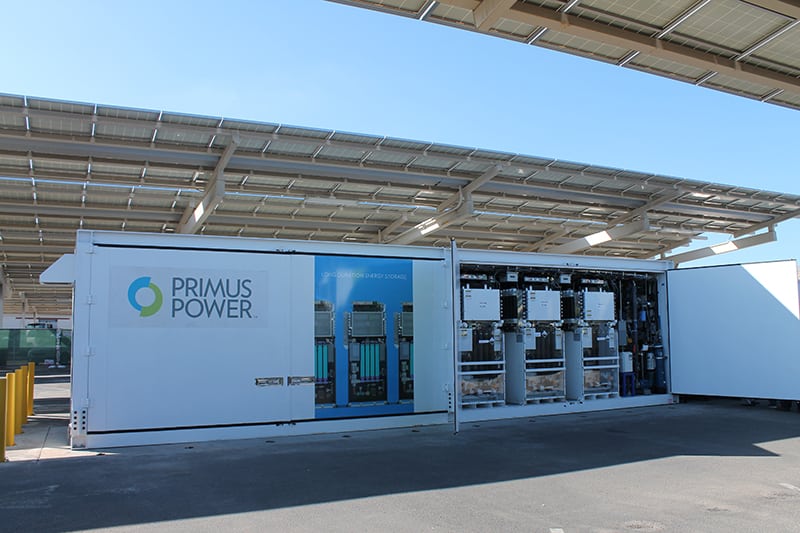 1. Island base. This 1-MWh flow battery system is installed as part of a microgrid that includes a solar photovoltaic carport at the Marine Corps Air Station in Miramar, Calif. The Department of Defense demonstration project is intended to test the usefulness of renewable energy–powered microgrids on military bases. Source: POWER/Tom Overton

Worse, restricting a system to a single application can mean it may be sitting unused for the large majority of its lifetime. Only by “stacking” applications can the full value be realized—but regulatory models need to catch up for this to happen, the RMI study says.

“There’s not a lot of mainstream compensation models for this approach,” Fitzgerald said.

That’s an issue that several other key figures in energy storage reiterated.

“We build the rules around the things that exist, not the things to come,” John Zahurancik, president of AES Energy Storage, told POWER in an interview. “Where we’ve seen good policy is where people have focused on the value that’s to be provided and not get so worried about the exact technology or solution.”

Zahurancik pointed out that the creation of the independent system operators (ISOs) and regional transmission operators brought transparency to a wide range of services that had previously been embedded in integrated utilities, and that opened the door to new solutions that could do things better and more efficiently than traditional methods.

Some markets are letting energy storage compete for those services, Zahurancik said, but there are others where storage is not allowed in or is not being considered on an apples-to-apples basis.

Still, he sees progress with these regulatory regimes opening themselves up.

“We’re starting to see the first of that. It’s a kind of an analytic evolution.” That being said, he noted, “The policy spectrum needs to keep focusing on how we get those embedded values to the customers.”

One of the most challenging markets for storage is Texas, because of how that state prohibits transmission owners from owning generation. That’s a problem that the state’s largest utility, Oncor, has been trying to get Texas regulators to address for several years. It wants to install as much as 5 GW of storage across the state, but it’s handicapped because that prohibition keeps storage owners from capturing all potential values.

Oncor proposed a change in the rule that would have allowed transmission owners to auction off a portion of their storage capacity to merchant generators, who would then be the ones to use that capacity to buy and sell electricity on the wholesale market.

Faced with opposition from the state’s generators, however, the Texas Legislature did nothing with the idea during its 2015 session.

Oncor has been pushing forward anyway, with initiatives such as its System Operating Services Facility in Lancaster, a state-of-the-art microgrid that combines a variety of generation technologies with energy storage and sophisticated software management (an effort that earned it POWER’s 2015 Smart Grid Award).

And there is more on the way.

Zahurancik announced at ESNA that AES would be supplying a 20-MW Advancion system to Oncor, which the utility will install in the Dallas area for grid reserve services. In this case, AES and Oncor were able to structure the system to return sufficient value despite the regulatory restrictions, he said. The system will come online toward the end of 2016.

Though the policy challenges are real, Zahurancik argued that the focus needs to be on finding pockets of value and filling them with storage.

“Once you have an asset like that embedded, once you have storage on the grid whether it’s in front of the meter or behind it, you can start looking for other ways to use it to maximize its benefit.”

Zahurancik , however, took mild issue with the RMI suggestion that storage systems need to be sliced up into a variety of narrow services to capture their value.

“On the whole, it’s best if you can find one or two primary value streams,” he said. “Go do that, and then if you can help with these other things later, I think they’ll emerge at that time.”

Companies in the rapidly growing storage sector are competing vigorously to capture those value streams with new products and services.

California real estate investment firm The Irvine Company announced that it was partnering with SunEdison, Tesla, and Advanced Microsystems to install a fleet of Tesla PowerPack batteries at up to 24 of its commercial buildings in Irvine. In addition to reducing peak demand at these buildings by 25%, the batteries will also provide up to 10 MW of reserve capacity for area utility Southern California Edison.

Santa Barbara, Calif.–based Ice Energy, which has marketed its Ice Bear thermal energy storage solutions for several years, announced that it would begin marketing a combined solar photovoltaic (PV) and storage system called Solar + Ice. The Ice Bear is a behind-the-meter system that connects to standard commercial air conditioning (AC) units, and it stores thermal energy in the form of ice when demand for power is low.

Ice Energy CEO Mike Hopkins explained to POWER that the stored ice is normally dispatched to provide cooling in place of the AC compressors. When combined with solar PV, however, the two systems can work together to serve demand more efficiently, with excess solar generation being used to create ice, and the Ice Bear providing cooling in late afternoon and early evening hours as solar generation tapers off.

The Ice Bear jumped dramatically in profile when Southern California Edison (SCE) announced it was purchasing a total of 25.6 MW of the systems as part of meeting its share of the California storage mandate. Hopkins said that the SCE deal was a game-changer for the previously little-known firm. “Utilities across the country, and even outside the country, wanted to know ‘Who are you and why did they [SCE] do this?’”

Though California is currently the firm’s major market because of the favorable treatment of storage, Hopkins said Ice Energy is expanding into other areas across the U.S. and Canada. The firm’s project pipeline is currently several times larger than the SCE deal.