Folks in the electric business are talking—a lot—about the “smart grid.” In February 2009, the U.S. House of Representatives Select Committee on Energy Independence and Global Warming held a hearing titled, “Get Smart on the Smart Grid: How Technology Can Revolutionize Efficiency and Renewable Solutions,” that demonstrated considerable uncertainty about what the phrase means in practical terms.

The hearing didn’t resolve any of the confusion about the smart grid, but it did serve to bring some of the major questions to the surface. For some, the smart grid appears to be a universal solvent that can dissolve all of the problems facing the electric industry and its customers in the years ahead; others are more cautious. Everybody admits that whatever it is, the smart grid is expensive.

Smart grid sounds like a lot of expensive hardware and software to bite off, according to Jim Hoecker, counsel to a broad-based electric industry coalition and former Federal Energy Regulatory Commission chairman. Testifying for the Working Group on Investment in Reliable and Economic Electric Systems (WIRES), Hoecker warned, “When we speak of the ‘smart grid,’ let’s not overlook the ‘grid’ itself.” He noted that the distinction between the old-fashioned grid and the smart grid is “difficult to draw” and that the two terms are “often used interchangeably. There is no standard definition of smart grid.”

The intent of Hoecker’s testimony was to guide the discussion away from pie-in-the-sky musings about Internet protocols, smart meters, and distribution network technologies, and toward the big iron and copper. Referring to spending on conventional extra high voltage and direct current transmission between now and 2030, he said, “Educated estimates of the size of the investment that must be made . . . range in the neighborhood of $300 billion. After a period of declining investment, U.S. companies will have spent about $30 billion on transmission in the period 2006–2009, at a rate roughly double the annual expenditures at the beginning of the century. However, as of mid-2008, only 668 miles of high voltage transmission has been built across state lines since 2000. Remarkably, the staggering expenditure on transmission will remain the smallest component of the investment we must make in the electricity system.”

Robert Gilligan, vice president of transmission and distribution for General Electric (GE), embraced both the high-voltage transmission grid and the lower-voltage distribution network as elements of his definition of the smart grid. Of course, GE stands to benefit from both transmission and distribution system investments. The smart grid, said Gilligan, “is a framework for solutions. It is both revolutionary and evolutionary in nature, because it can significantly change and improve the way we operate the electrical system today, while providing for ongoing enhancements in the future. The smart grid is defined differently by and provides different benefits to the various audiences it serves.”

Gilligan extended the smart grid metaphor to include the smart house—something electric utilities have been promoting, without success, for 25 years. The smart house of the future as Gilligan outlines it includes Internet-enabled monitoring of energy consumption, “smart appliances with two-way utility connections” (what one wag dubbed “talking toasters”), rooftop and backyard generation with net metering, and a “smart charging interface for plug-in hybrid electric vehicles.”

For Allan Schurr, vice president of IBM’s energy and utilities line of business, another potential purveyor of goods and services in the field, the smart grid (Figure 1), writ large, also requires “smart rates.” That will be a challenge to utilities and utility regulators. Utilities that have to make the investments to build the smart grid “focus on minimizing risk and consequently, utilities are often slow to adopt new technologies that have not been extensively proven on a large installed-base,” he said. “In addition, the many-faceted value of smart grid technologies has been difficult to quantify in a simple cost-benefit analysis, thus making comparative financial metrics difficult to achieve. Existing electric rate structures create further complications since state public utility commissions (PUCs) are responsible for ensuring that electric utilities under their jurisdiction provide service at a cost effective price.” 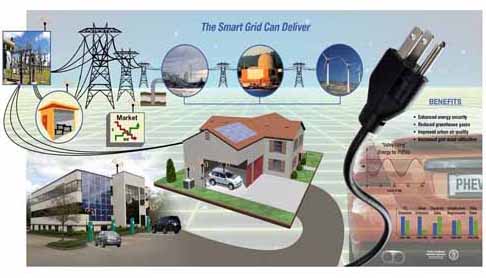 How to solve the ratemaking and economic transparency problem? Schurr called for a rate approach outlined in a report by the Brattle Group, an economic consulting firm. According to Brattle, a smart rate yields “cost-based, forward looking information on the price of electricity that allows consumers to make wise decisions about how much electricity to purchase and when to purchase it. A review of default rate designs across North America reveals that prices paid by customers do not reflect the scarcity of capacity to produce energy at various times of day.”

A few small pilot smart grid projects are currently in place or getting underway. The pioneer purveyor has been Maryland-based CURRENT Group. CURRENT became involved by developing technology for broadband over power lines (BPL), which did not pan out as a viable business. So, CURRENT’s BPL business morphed into using the same technology and the ubiquitous “Internet protocol” (IP) to provide a level of intelligence on distribution grids. Xcel Energy, for example, is testing a grid network running with IP in Boulder, Colo.

Achieving widespread adoption of smart grid technologies, however defined, said CURRENT CEO Tom Casey (Figure 2), will require new incentives to build out a new system. “In general, under traditional regulatory models,” he said, “a utility’s cost is largely fixed and its revenue is the product of the number of kilowatt hours sold multiplied by the price per kilowatt hour. There is thus no reason to believe that a for-profit entity will (or should) spend money in order to earn less.” This is what Xcel calls “uncompensated demand destruction,” meaning that the company loses load and loses revenue as well, as a result of its infrastructure investment. That’s what many executives would describe as a “lose-lose” proposition. 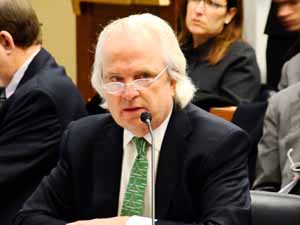