In 2014, three organic Rankine cycle (ORC) generators were installed to turn the waste heat from three diesel gensets at the Dutch Harbor power plant in the remote Aleutian Islands of Alaska into power. The generators capture waste heat at temperatures as low as 170F from the jacket water of two Wärtsilä W12V32 diesel engines and two Caterpillar C280-16 diesel engines.

Even at this low waste-heat temperature, the generators provide approximately 75 kW of gross power for the site. The power generated is sent directly to the grid, where residential costs of power are as high as $0.50/kWh, some of the highest in North America and four times the U.S. national average of $0.12/kWh.

The City of Unalaska and the Alaska Energy Authority purchased the three generators (Figure 1) to utilize the untapped, existing waste heat resource at the power plant, realizing the potential to save tens of thousands of dollars per year in fuel costs. The reduction of cooling loads is an additional benefit because installations reduce required radiator cooling work for the diesel engines. All three ORC generators utilize one cooling loop, provided by seawater with an input temperature averaging 45F.

The generators were provided by ElectraTherm and are controlled by an AutomationDirect programmable logic controller (PLC), which provides all of the required control and monitoring functions. A human-machine interface (HMI) is also provided by AutomationDirect, allowing operators to view and adjust operation as needed.

In a typical stationary diesel, natural gas, or biogas-powered reciprocating engine, only about 33% of the applied fuel energy (combustion) is converted to power, with the remaining energy lost as waste heat. Some of the leading low-temperature losses include 27% lost to radiator heat and 5% lost to friction. An additional 35% is lost as high-temperature heat in the exhaust gas.

This level of waste heat is common in reciprocating engines. In addition, hot exhaust stack gases from virtually all combustion processes—such as those used to fire ovens, kilns, furnaces, incinerators, thermal oxidizers, and boilers—contain a large fraction of the original energy of the fuel consumed. When this heat is recovered and converted into electricity, overall plant efficiency increases.

In the past, there weren’t many proven commercial products for converting these types of waste heat to power, so operators had little choice but to accept the heat loss to the atmosphere. Today, ElectraTherm has deployed more than 70 units worldwide with more than 1.2 million hours of cumulative fleet experience, saving customers millions of dollars in the process. 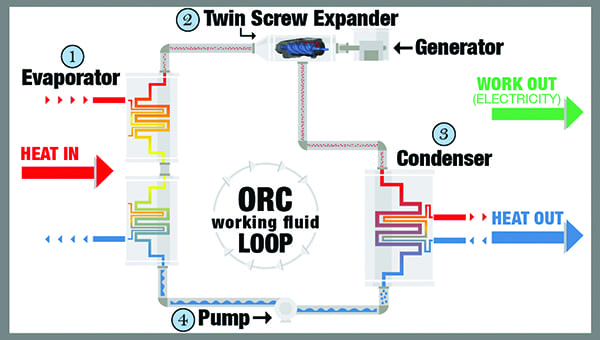 Steps in the ORC process include:

■ Surplus heat is used to boil a working fluid in an evaporator.

■ Under pressure, the vapor is forced through a twin-screw expander (the power block), turning it to spin an electric generator.

■ The vapor is cooled and condensed back into a liquid in the condenser.

■ The working fluid liquid refrigerant is pumped to higher pressure and returned to the evaporator to repeat the process.

Heat produced by large stationary engines are typically at temperatures too low to drive a steam engine to produce electricity. Replacing water and steam with alternative low-boiling-point fluids allows a modified version of the traditional Rankine cycle to successfully use the waste heat.

Such fluids include organic molecules, such as hydrocarbons like pentane or hydrofluorocarbon refrigerants, hence the moniker ORC. ElectraTherm’s ORC waste-heat-to-power generators use a hydrofluorocarbon called R-245fa (1,1,1,3,3-pentafluoropropane), a nonflammable, nontoxic liquid with a boiling point slightly below room temperature, about 58F.

Instead of radial or axial turbine technologies, ElectraTherm uses a twin-screw expander in its heat-to-power generating system. The expander is one of the major components used to generate electricity from a variety of heat sources.

■ Low-speed operation with the ability to handle heat input variations and dual-phase flow of the working fluid.

The twin screw expander has a rotational speed of 1,800–4,900 rpm, considerably less than turbo expanders. Unlike high-speed turbo expanders, screw expanders tolerate “wet” dual-phase flow. This allows the POWER+ GENERATOR to utilize more cost-effective and compact heat exchangers that can accept disruptions in both temperature and flow, with turndown ratios of 6:1 available on demand. This is particularly advantageous in low-temperature, waste-heat streams such as reciprocating engine jacket water. The system also uses a patented lubrication scheme, which simplifies the design and eliminates lubrication reservoirs, oil coolers, pumps, and related filters. This design creates a simple, robust, and efficient system with fewer parasitic loads and maintenance requirements. It also simplifies automation and operation of the equipment.

The POWER+ GENERATOR is designed to run automatically with minimal customer oversight or supervision required. Once started, the proportional-integral-derivative (PID) function in the PLC maintains system power output at the setpoint. The PLC (Figure 3) was selected for its expandability, PID control functions, and ease of use. Another reason for selecting AutomationDirect components was the support of its value-added reseller Quantum Automation. The company provided assistance with the initial design and support throughout the process of integrating a new automation system into the Power+ Generators.

The PLC’s PID loop control includes auto-tuning, used to quickly provide near optimum loop settings, and a variety of control modes including automatic, manual, and cascade. A variety of alarms were programmed including process variable, rate of change, and deviation.

The PLC controls the working fluid feed pump, safety valves, and various other subsystems and field-connected devices. Based on sensor input, the PLC can stop the process if undesirable or unsafe conditions develop. It also controls a three-way valve on the jacketed water-side to bypass the heat exchanger, if necessary. An additional pump to circulate water through an exhaust gas heat exchanger is also PLC-controlled, if installed.

The HMI was selected for the operator interface based on ease of use, availability of data logging, upload features, and low cost. In addition to graphical display functions, it provides alarming, remote accessibility, logic, math, and support of numerous communication protocols. Machine status can be viewed directly or remotely.

Approximately 60% of the fuel consumed by the three diesel gensets at the Dutch Harbor power plant is converted to waste heat via jacket water and exhaust gas. By using the Power+, the Alaska Energy Authority estimates $100,000 in annual energy savings is realized by converting some of this waste heat to power.

The system also eliminated one of the three engine radiators due to the cooling effect of the POWER+ system, providing additional horsepower from the diesel gensets. Because the POWER+ GENERATOR can reduce the jacket water loop cooling load by 70% to 100%, it also decreased the temperature of the low-temperature intercooler radiator. This increased the charge air density and the effective engine power, which in turn increased fuel efficiency by up to 10%.

In addition to the benefit of electricity generated, the POWER+ GENERATOR also reduced the radiator cooling work. This decrease in temperature cut the engines’ required thermal cooling work per month by about 8,000 kW, saving approximately 500 gallons of fuel annually. ■

—Joe Thibedeau is a control systems engineer, E.I.T. with ElectraTherm.