After years of stressing the conventional virtues of geothermal power production—reliable, baseload renewable energy from geological sources—the geothermal industry and the U.S. government are looking at ways technology can change the hot rocks game and give a boost to an often-overlooked resource.

Legendary venture capitalist Vinod Khosla, who made a pile of money in information technology and computers, is making another big bet, on an advanced energy technology. This time he has put his money down on the application of advanced oil and gas technology to the promising but long-lagging field of geothermal energy.

Khosla is making a wager on geothermal because of its very different profile from the hot-shots in today’s renewables market, wind and solar. Unlike the sun and wind, geothermal energy offers round-the-clock generation. On top of that, the fundamental geological fact is that hot rocks are ubiquitous, although not always attractive for conventional geothermal technologies.

Geothermal energy has never caught on in a big way, in part because the easiest plays—high-pressure steam from underground turning turbine generators, as in the Geysers in northern California—aren’t plentiful. The most successful of these projects in the U.S. are in California and Nevada. The conventional projects need geothermal heat next to water aquifers.

Also, drilling for geothermal projects is expensive, requiring lots of capital that gets put at risk if the resource isn’t as rich as projected. As a Fortune.com article recently noted, “In an era when huge clean energy farms using solar panels and wind turbines are being built across the U.S., geothermal power plants have long been the underdog—big on potential but short on promise.”

Onto that scene comes AltaRock Energy, backed by Khosla personally and through his venture capital company, Khosla Ventures. AltaRock aims to use a technology that has proven revolutionary in the oil and gas industry—hydraulic fracturing—to revolutionize geothermal. The industry uses the term “engineered geothermal systems” and “enhanced geothermal systems” or EGS, no doubt in part to avoid the politicization and controversy that has become attached to “fracking.” The geothermal mavens call what they are doing “hydro-shearing.”

But the technology is much the same as fracking. Drills bite into the deep strata to reach hot rocks. Then the operators inject cold water at high pressure into the rock, breaking the strata apart, liberating heat, and producing plentiful hot water. The hot water, and steam, then flow up the well, where they can turn a turbine generator directly or run a binary system with a heat-transfer liquid. Greentech Media said, “EGS, if proven safe, would turn the earth’s deep heat into productive geothermal power even in the absence of the kind of water reservoir adjacent to the heat source that makes a conventional hydrothermal well viable.”

That’s AltaRock’s target. The company, formed in 2007 to exploit advanced geothermal opportunities, earlier this year acquired an under-performing Nevada geothermal plant, Blue Mountain Faulkner near Fallon, N.V. Blue Mountain (a POWER renewables Top Plant Award winner in 2010) is a binary-cycle project using hot water from the well to heat a secondary fluid, rather than steam, to make a gas that turns a turbine. The project, designed for 50 MW of production, went into service in 2009, financed with Department of Energy (DOE) money from the Obama administration’s American Recovery and Reinvestment Act and a power purchase agreement from NV Energy.

Despite its initial promise, Blue Mountain never lived up to its billing, delivering only around 35 MW, with a drop in performance that suggested it would slide to 15 MW by 2020 (Figure 1). The heat from the water coming up the well declined substantially and quickly, reducing the energy available to make electricity. 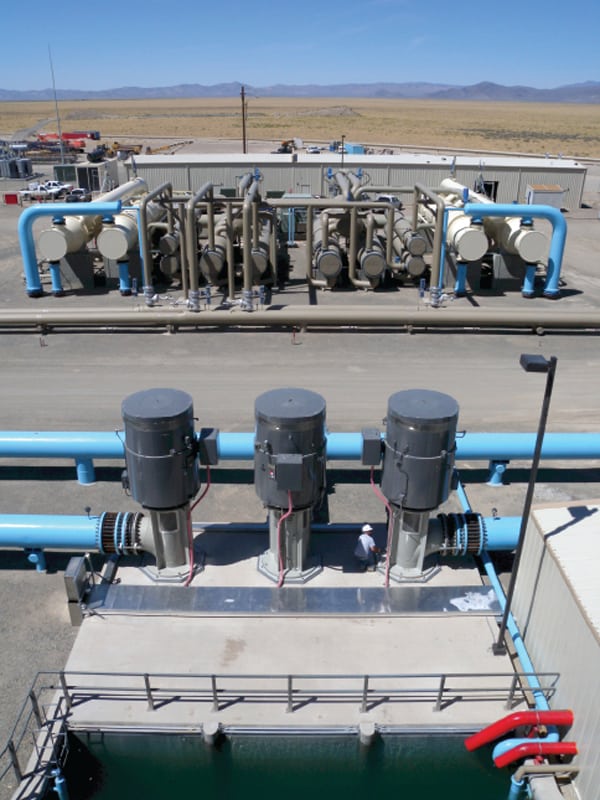 1.              Singing the blues. The Blue Mountain Faulkner geothermal plant, designed to generate 50 MW, has never hit that target, and the trend is headed down rather than up. Courtesy: Nevada Geothermal Power Inc.

After defaulting on its debt, the project ended up with AltaRock, which had demonstrated the value of its “hydro-shearing” technology at the Newberry Geothermal Project near Bend, Ore., in 2012. At the time, Tom Williams of the government’s National Renewable Energy Laboratory in Colorado told Greentech Media, “From the developments at Newberry, it looks very promising that you can do fracturing in different zones and control it. It is in the R&D stage but when it is proved, it will open up geothermal to the whole U.S. because enhanced geothermal systems can be created anywhere and the total potential is enough to power the electric grid many times over” (Figure 2). 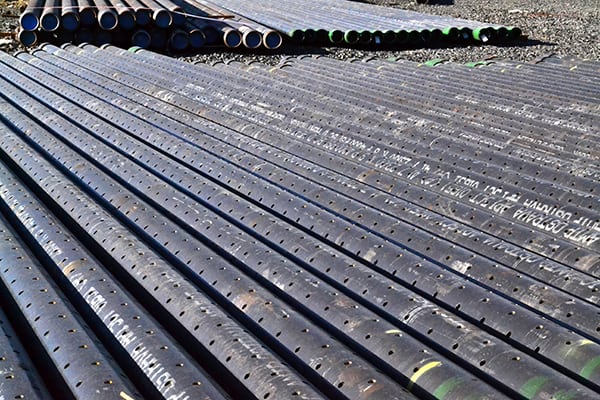 2.              Enhanced casing. Slotted casing was piled on site before it was installed in the bottom of the injection well at the Newberry EGS Demonstration project in 2014. Slotted casing allows water to move in and out of the well and keeps the rock walls from collapsing inward. Courtesy: AltaRock Energy

AltaRock CEO Aaron Mandell told Fortune.com that the company has halted the decline in temperature in the Blue Mountain well and boosted the plant’s capacity back to 40 MW. He said his company expects to be able to bring the project back to its full 50-MW potential.

The DOE is bullish on EGS. This year, the agency picked five projects for $2 million in grants in the first phase of its “Frontier Observatory for Research in Geothermal Energy,” or FORGE, program. This first phase, and a second, said the DOE, will put a total of $31 million over two years into the hands of teams selected to do the research. The five teams selected in the first phase, it said, “represent proposed projects in California, Idaho, Nevada, Oregon, and Utah,” all in the heart of the most promising geothermal energy areas.

The DOE’s Franklin Orr, undersecretary for science and energy, said in a press release, “Enhanced geothermal systems could represent the next frontier of renewable energy and hold the potential to diversify the nation’s energy portfolio while reducing greenhouse gas emissions into the atmosphere.”

As the DOE explains it, natural geothermal systems require (1) “abundant heat found in rocks at depth,” (2) “fluid to carry the heat from the rocks,” and (3) “small pathways to conduct fluids through the hot rocks.” The problem for geothermal is in parts (2) and (3), which are too often lacking. That’s where hydraulic fracturing comes in, providing water to carry the heat and breaking up the rocks to make the heat available to connect to the water.

Engineered geothermal isn’t the only way the industry is applying new technology concepts to the business of turning hot rocks into real dollars, as the Geothermal Energy Association (GEA) highlighted at its 2015 annual meeting in Reno, Nev., in June. In a telephone press conference, Josh Nordquist, business development director for Ormat Technologies, one of the leading geothermal energy firms in the U.S., told POWER, “Technology is definitely at the center of our industry’s strategy for the future.”

Instead of focusing on the obvious benefits of geothermal—baseload capacity and reliability—said Nordquist, developers are looking at turning their projects into load-following generators with extra value as backup, load support, and grid ancillary services in an increasingly intermittent renewables world. The GEA hailed Ormat for developing “the first fully dispatchable, flexible geothermal power plant,” the 38-MW Puna plant on Hawaii’s Big Island, “which allows Hawaiian Electric Light Co. to operate up to 16 MW of [Puna’s] output on automatic generation control, a first for the industry.”

Enel Green Power North America is touting its Stillwater “hybrid” plant in Fallon, Nev.—which includes a binary plant—as a new geothermal technology. In a press release, Enel said the Stillwater project “combines the continuous generation capacity of binary-cycle, medium-enthalpy geothermal power with solar photovoltaic and the more recently installed solar thermodynamic unit. The plant is the first in the world to integrate 26 MW of solar PV with an existing 33 MW of geothermal capacity.”

Enel’s Terry Page, head of regulatory affairs and innovation, told POWER, “Our customers, typically utilities, are seeing some recognition that geothermal has attributes that other technologies don’t have, or that we can complement, such as solar and geothermal. The drilling costs for geothermal haven’t gone down, so we have to try to enhance the quality of our product, and integrate it into increasingly lower-cost renewables.” (See sidebar for more on drilling costs.)

The Geysers, located 70 miles north of San Francisco in the wine country of Sonoma, Lake, and Mendocino counties, is the largest geothermal complex in the world, with 725 MW of generating capacity, now owned by Calpine Corp. San Francisco–based Pacific Gas and Electric originally developed this granddaddy of geothermal in the 1960s. The flash-steam project covers more than 30 square miles of territory.

At its peak the Geysers had over 1,000 MW of generating capacity. Power output declined as the water reservoir feeding the hot rocks began tapering off in the 1990s. In the late 1990s, the owners began injecting wastewater into the hot rocks, increasing the output substantially and keeping the generating resource commercially viable.

Where are the geothermal hotspots for the future? In addition to the U.S., if EGS lives up to its billing, Australia looks very promising, particularly the vast state of Western Australia. The Gizmag website, citing Australian government studies, reported, “Australia is sitting on top of some of the world’s most potent geothermal energy sources.” Here’s the Aussie rub: “Australia has a ton of hot rock, but not a lot of the highly-porous rock that makes for easy power extraction. To generate power, you need to be able to pump large amounts of water into a deep rock hole and let the water filter through pores and cracks in the rock, picking up heat as it goes, and then pump the heated water back to the surface on the other side.” Sound familiar?

Geothermal energy has skeptics, who believe the process is limited, regardless of technology. Euan Mearns, the PhD geologist mentioned in the sidebar, who teaches at Scotland’s University of Aberdeen, writing for the Energy Matters website, says geothermal “is presently a minor player in the field of renewable energy” and “is likely to remain so.”

Mearns noted that in 1980, he bought land for Kennecott Copper Corp. in California’s Salton Sea geothermal field, “knowing that a high-temperature geothermal resource was present there.” In 2012, EnergySource commissioned the 50-MW Hudson Ranch project—now renamed the John L. Featherstone plant. It was the first geothermal plant to go online in the Imperial Valley in 20 years. (See “Mining for Lithium in Geothermal Brine” in the February 2015 issue for the latest developments and challenges at this site.)

Mearns commented that while he knew there was a large resource at the site, “What I didn’t figure on is that it would take 32 years to put it into production. But such is geothermal.” Mearns, who has been active in “peak oil” circles, says the same resource exhaustion limits he believes apply to oil and gas are true for geothermal. The problem, he argues, is that “high-temperature geothermal resources are found only where there is a coincidence of high heat flow and favorable hydrology.”

“And it’s not as if geothermal development has been held back by technological difficulties,” writes Mearns. “Geothermal electricity generation is a proven technology that’s been around for over a century (the first commercial geothermal power plant came online at Larderello in Italy in 1911). The problem is that huge areas of the world simply don’t have the high-temperature resources necessary to support electricity generation.”

Does it seem that EGS—aka, hydraulic fracturing—is pointing directly at the problems that Mearns raises?