GE has launched a three-part strategy to address a dismal outlook for its power division that will involve operating in a “leaner, more cost-efficient way,” the company’s head told investors in a February 26 letter.

According to GE’s 2017 Annual Report released on February 26, the power unit’s profitability was deeply affected by a decline in the heavy-duty gas turbine market and overcapacity, which drove down pricing and margins, and “challenging dynamics” in the aeroderivative gas turbine market, including “customer financing availability.” The company also cited lower demand for services upgrades, supply chain overcapacity, and “tougher competitive dynamics” on transactional services. In November, GE also pegged weak earnings to an underperforming $10.1 billion investment in Alstom. In December, it moved to cut 12,000 jobs and save $1 billion of structural costs in 2018. 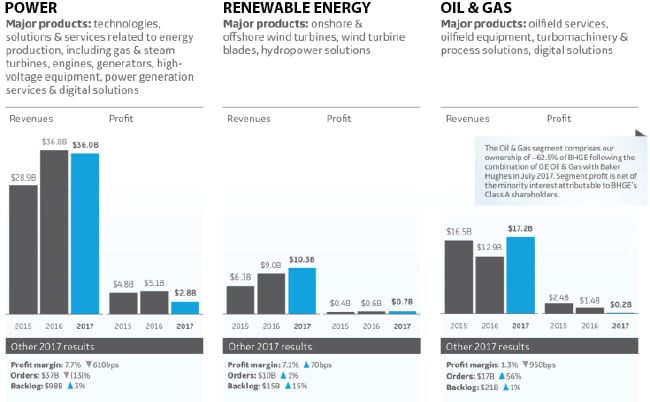 But the grim outlook for GE’s beleaguered power unit will require a further, careful revamp, John Flannery, chairman of the board and GE’s CEO said in an letter to shareholders associated with its 2017 Annual Report. For now, the unit anticipates much lower demand in a market that will remain challenging owing to increasing renewables in the energy mix.

“We are preparing for a market that could be as low as 30 gigawatts in 2018, deteriorating further into 2019. And it will take us into 2019 to right-size our business for this,” Flannery wrote. “Over the past several months, we have examined every inch of this business and we have a plan to reset, refocus, and renew Power.”

In the separate letter to shareholders bundled into Flannery’s message, GE Power President and CEO Russell Stokes noted that the “dynamic nature” of the global power sector has become “increasingly local and complex.” Like businesses across the sector, disruptions have affected GE.

“Customers everywhere are seeking energy solutions with the best cost, lowest carbon footprint and greater reliability and resiliency. In 2017, we also felt the disruptive nature of renewables penetration into the energy mix,” he said. “While renewables are here to stay, we know that gas and other fuel types will remain important.”

However, to remain competitive, GE Power will need to get “back to basics,” Stokes wrote. While the company consolidated its legacy Power and Energy Connections businesses to obtain an “end-to-end” view of the energy value chain, it will now also move to further reduce its structure and manufacturing footprint. Along with slashing its global headcount by 12,000 positions, GE Power will also reduce manufacturing capacity by 30% or more. “[W]e’ll continually evaluate further reductions depending on market demand,” Stokes said.

The strategy will also involve redefining a clear path for its asset lifecycle. In November, company executives said the earnings drop was partly tied to declining margins tied to initial launch issues of its HA heavy-duty gas turbine offering and a margin compression in its service business. Stokes said the company has moved to consolidate its IT systems to give it better visibility into operations in real-time. Meanwhile, “our new CIO is streamlining our infrastructure to 80% fewer applications,” he wrote.

GE Power will also move to maximize services dollars per installed asset to leverage $1 billion in new service opportunities it identified at the end of 2017. “We have a 1,600-gigawatt installed base of assets in the world,” Stokes wrote. While the company “lost focus on holistically driving revenues across our entire fleet, especially our transactional portfolio,” with new leadership, the company is making progress in “balancing this focus.”

The company’s overall efforts to become a “leaner, more focused, and more efficient business with better cash and income returns” will be commitment-driven, Stokes said.

“We will continue to develop high-technology products that will lead our industry. We also are investing in software and growth incubators around storage, distributed grids, and grid automation so we can successfully lead the global shift to decentralized, decarbonized, and digitized electricity infrastructure.”