The European Union (EU) cannot meet its 2050 carbon emissions goals without reform of its carbon-pricing scheme, according to a report from the European Gas Forum released on Dec. 13.

While progress toward the goals has been made, the report warns that the pace of decarbonization will stall in the 2020s because low carbon prices, cheap imported coal, and rapid deployment of renewable energy have led to the closure of efficient gas-fired power plants, while older, more polluting plants have continued operating. As a result, power sector carbon dioxide (CO2) emissions are currently rising rather than falling.

The European Gas Forum, a group of eight major European gas companies, commissioned the study out of concern with the current EU gas market, in which high gas prices and low carbon prices have led to a resurgence of coal generation despite official preference for less-polluting options. EU carbon prices have fallen substantially at the same time as reduced demand for coal in the U.S. has led to increased exports to the EU, depressing coal prices. This has made gas-fired power deeply uneconomic in many areas.

The report argues that without policy changes, these economic challenges run the risk of locking in a dependence on coal, because the carbon pricing scheme provides insufficient disincentives for building new coal capacity. Even with continued strong support for renewables, meeting electricity demand will require adding more than 120 GW of new coal generation in the EU by 2030. Should this occur, reaching the 2050 carbon emissions targets may be impossible (Figure 1). The report’s model predicts that under current policies, 89 GW of coal generation will still be operating in 2050. 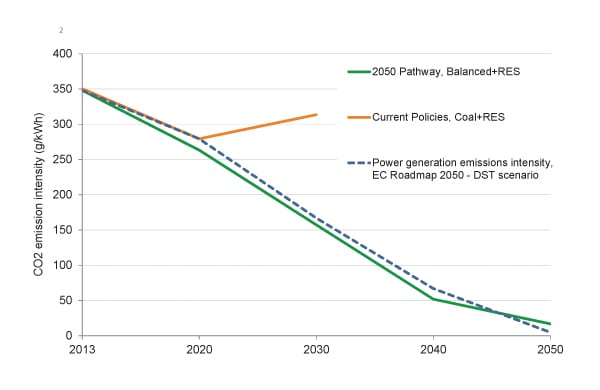 1. A bend in the road. Under current policies, which are forcing a resurgence of coal-fired power, progress toward EU carbon emissions goals will stall around 2020. Courtesy: European Gas Forum

In addition, grid stability could be at risk due to the lack of flexible gas-fired power generation to support intermittent renewables.

Though efforts to shore up carbon prices in the EU’s Emissions Trading Scheme (ETS) floundered during 2013, the report argues that reform of the ETS is critical to staying on target for the 2050 goals. “Despite measures to reduce coal capacity, new build rates to 2030 will reverse this trend in many EU regions if ETS and coal prices remain at or near current levels,” it says. Stronger carbon prices, however, would provide limits on new coal build, improve the economics of gas-fired power, and support greater renewable deployment, with only a limited impact on wholesale marginal prices. The gains in emissions intensity are greatest with carbon prices above €40/ton.

ETS carbon prices are currently under €5/ton, though progress toward reform was finally made in December when the European Parliament approved several measures intended to shore up prices and clear the glut of credits on the market. The plan, known as backloading, will temporarily cut by half the annual number of permits for the 12,000 power plants and other facilities in the ETS system and return those 900 million permits from 2014 to 2016 to the market by 2020. The change was approved by EU member states on Jan. 8, but further action by the parliament and EU Council is necessary before the measure can take effect. Once the backloading begins later this spring, experts predict a modest rise in the carbon price, though likely not beyond €10/ton.