The European Union (EU) on Dec. 16 announced an agreement among its member states on rules involving the financing of green energy projects. Lawmakers approved a list of technologies and activities that can be classified as green, after disagreement about whether nuclear energy and natural gas should be included.

The so-called “Green Deal” is a project spearheaded by European Commission President Ursula von der Leyen, who took office on Dec. 1. Von der Leyen is a German politician who had been the longest-serving Cabinet member for German Chancellor Angela Merkel. The new legislation has a goal of making the EU climate-neutral by 2050, and is in concert with the EU’s political stance with the Paris Agreement from 2015. 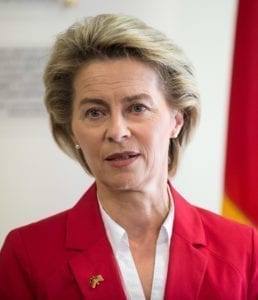 France led a group of nuclear energy proponents in seeking revisions to an earlier version of the financing rule, released Dec. 11, that excluded nuclear power and gas from classification as technologies eligible for the investment program. The EU Parliament and member states had sparred over the recognition of nuclear power, and of natural gas as a “transition” source of energy.

Monday’s deal says targets on emissions reductions by member states to reach the 2050 goal should be finalized by next summer, ahead of a planned EU-China bilateral meeting and the COP26 Summit in Glasgow, Scotland, next fall. The new deal advances the EU’s push to embed environmental goals in standards for banks, money managers, and insurers, by defining what is considered a green activity and what is not. The EU wants to regulate the market for green energy investment to direct money into the regional economy.

Canfin noted that the final version of the deal means both natural gas and nuclear power “are neither included nor excluded in principle” from parts of what’s called a taxonomy list, which in effect includes the EU’s definitions of sustainable activities for investment purposes. Canfin said nuclear power and gas can be included if they—along with other activities on the list—comply with a “do no significant harm” principle.

Some EU member states, such as Poland, have pushed back against the organization’s climate goals, in part saying they would cause economic harm. Meanwhile, a recent report said 80% of the EU’s coal-fired power units operate at a loss.

The proposal agreed to late Monday, after final revisions were made earlier in the day, includes an emphasis on boosting economic competitiveness of member states, and ensuring an equitable transition to cleaner energy across the EU. The deal’s tenets include environmental protection and biodiversity, strategic development of sustainable food policy, and a plan for action toward a circular economy that promotes recycling and the use of recycled materials. It promotes decarbonization in power generation along with transportation and agriculture.

The agreement says, “The price of transport must reflect the impact it has on the environment and health,” and says an EU review of Energy Tax Directive would consider removing tax exemptions for aviation and maritime fuels.

EU leaders last week said member states should have zero net carbon emissions by 2050. Valdis Dombrovskis, the European Commission’s official in charge of financial services policies, on Twitter said Monday’s deal “is the much-needed enabler to get green investments to flow and help Europe reach climate neutrality by 2050.” The European Commission is the EU’s executive arm and will adopt the list of activities included in the financing agreement, which sets the overall framework of investment policy.

Banks and other financial institutions will need to detail how their products comply with the taxonomy list. “We are delighted that there is progress in the approval of the EU taxonomy,” Nathan Fabian, chief responsible investment officer at Principles for Responsible Investment, said in an email to Bloomberg. “Investors in Europe and around the world see the taxonomy as a major reform in investment practices and are keen to understand their obligations under the framework.”

Achieving a level of net zero emissions by 2050 will take some work. The EU’s current 2030 target mandates a 40% cut in emissions compared to 1990 levels; the new agreement would move that goal to a 50% to 55% emissions reduction. Analysts have said that level would be needed over the next decade to remain on track for the 2050 net zero goal. Government data shows the EU has reduced carbon emissions by 23% since 1990, but at its current pace would achieve just a 60% cut by 2050.

Canfin said changes to the deal made Monday to appease proponents of nuclear power and natural gas-fired power generation do not undermine the EU’s goals under the agreement.

“The taxonomy could have been hijacked by the fight between pro and anti-nuclear on the one hand, and pro and anti-gas on the other,” Canfin said. “We have overcome this impasse with the following compromise: gas and nuclear can under no circumstances be included in the category of so-called ‘pure green’ investments, but they are neither included nor excluded in principle from the other categories. Like all technologies covered by the taxonomy, they will be subject to the strict test of the ‘do not significant harm’ principle.”

The Parliament negotiator in the talks, Green lawmaker Bas Eickhout, told the EURACTIV news service that the revised wording in the final document is merely “cosmetic changes.” Said Eickhout in an email to EURACTIV: “It was already clear from the deal last week that nuclear could be identified as transitional source of energy, and only that. The European Parliament fought for a clear ‘do not harm’ principle for the disposal of [nuclear] waste before it can qualify as sustainable. That principal stands as well. So it reads like technical clarifications.”