After decades of lethargic power demand—and negative growth in 2017—U.S. electricity use is expected to grow steadily through 2050, driven by a healthy economy and increasing efficiency, the U.S. Energy Information Administration (EIA) projects in its Annual Electricity Outlook 2018 (AEO2018).

However, during that period, direct-use generation will outpace growth in retail sales as more rooftop photovoltaic (PV) and natural gas combined heat and power (CHP) installations are adopted, says the agency’s annual report, which models projections of domestic energy markets through 2050 to pinpoint key trends affecting energy use and supply.

Meanwhile, a boost in natural gas production could markedly tamp down gas prices, roiling the outlook for other fuel sources in the current generation mix. While gas spot prices may increase despite continued technological advances that support increased production, prices at Henry Hub are expected to be 14% lower on average through 2050 compared to a reference case modeled in the EIA’s 2017 report, owing to an estimated increase in lower-cost resources, primarily in the Permian and Appalachian basins.

A Bane and Boon of Cheap Gas

The AEO2018, compared to AEO2017, dismisses impacts of the Clean Power Plan—the Obama administration’s legacy climate rule that remains in legal limbo and will likely be replaced. It also factors in a number of current state and regional policies, including the Illinois Future Energy Jobs Act, the New York Clean Energy Standard, the Maryland Clean Energy Jobs Act, and the Regional Greenhouse Gas Initiative.

Natural gas generation, specifically, is expected to thrive, especially after the scheduled expiration of renewable tax credits in the mid-2020s, the EIA said. Natural gas’s share dominates in the reference case, but it especially soars in the high oil and gas resource and technology case.

But despite dim industry projections for coal-fired generation in recent years owing to regulatory impacts, the EIA’s reference case projects that in the longer term, the relatively low cost of coal will moderate a decline in coal-fired generation. Specifically, coal capacity will fall by 65 GW between 2017 and 2030 but level off near 190 GW through 2050, the AEO2018 projects. High gas prices could slow the pace of coal retirements, but retirements are likely to increase if gas prices fall lower, such as in the high oil and gas case.

Cheap Gas will Prompt a Fifth of Nuclear Capacity to Retire

Notably, if natural gas prices fall, as is expected, 20% of current nuclear capacity could be retired. The reference case projects a steady decline in nuclear capacity—from 99 GW in 2017 to 79 GW in 2050—with no new plant additions beyond 2020. The reference case factors in completion of Vogtle Units 3 and 4—the only new nuclear units under construction in the U.S.—in 2019 and 2020, respectively, although Bechtel, which assumed responsibility to complete the project in August, suggests construction should wrap up in approximately 2022. 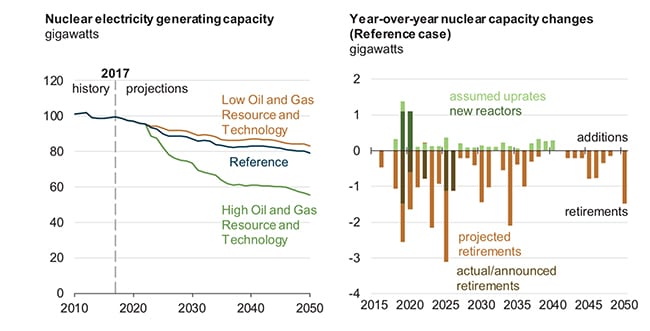 Very low gas prices could also limit the growth of renewables, but across all cases the agency modeled, renewables growth is expected to soar. The reference case projects renewable generation will surge 139% through 2050. Wind and solar generation will make up 94% of this growth, AEO2018 says.

Utility-scale wind capacity is expected to grow 20 GW through 2050, and solar PV, 127 GW. While the EIA likely didn’t factor in the Trump administration’s imposed 30% tariff on solar modules and cells, the report says generation from solar PV is especially poised to grow, reaching 14% of total U.S. electricity generation by 2050. The EIA estimated about 53% of this total will come from utility-scale systems.

The growth of renewables will boost economic opportunities for storage systems. The EIA expects utility-scale energy storage to increase by 34 GW. “Policies such as storage mandates in California and market participation rules in the PJM electricity market support near-term growth in storage systems to stabilize grid operations, improve utilization of existing generators, and integrate intermittent technologies such as wind and solar into the grid,” the EIA said.

To assess which technologies will have the most favorable cost characteristics, the AEO2018 notably uses “levelized avoided cost of electricity” (LACE), a measure of what it would cost to generate the power that is otherwise displaced by a new generation project, along with “levelized cost of electricity,” (LCOE). LCOE, the agency said, “can be misleading because different technologies serve different market segments.”

Assuming that an overlap in LCOE and LACE indicates favorable economics for new builds in a particular technology, the EIA concluded that combined cycle, wind, and solar PV will have the more cost-favorable characteristics.

The Rise of EVs and Energy Efficiency

Another significant trend outlined in the AEO2018 relates to soaring growth of battery-powered vehicles. Battery-electric vehicle (BEV) sales will increase from less than 1% of total U.S. vehicle sales in 2017 to 12% in 2050, the EIA said. Plug-in hybrid electric vehicle (PHEV) sales increase from less than 1% to 2% over the same period. This development will spur a sharp increase in electricity use in the transportation sector, it noted. 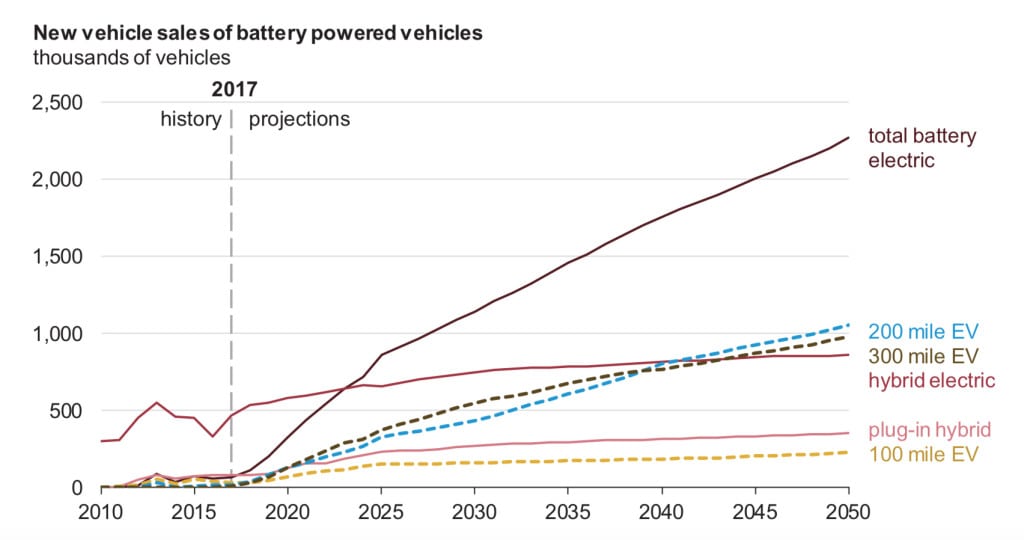