Although boiler ash is sometimes sluiced to a pond, where the water is decanted and, often, reused to sluice more solids, management of the material leads to a similar end application: disposal by solidification.

This article addresses landfill management of boiler ash. Future articles will discuss the operation of sluice ponds and marketing of CCP materials.

Many utilities with coal-fired boilers construct and operate captive landfills dedicated to the disposal of ash products. Fly ash, the lighter material that is collected from the flue gas stream of the boiler and usually of smaller particle size, normally constitutes 70% to 80% of all ash produced. Bottom ash, the heavier material collected in an ash hopper at the bottom of the boiler, accounts for about 20% to 30% of the waste stream. Although there are usually other much more minor components of coal ash, they will not be addressed here due to their more marketable nature. 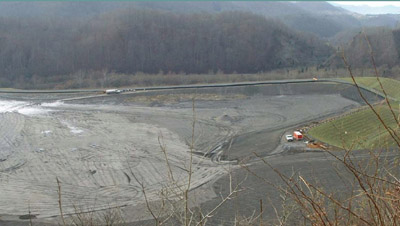 Captive landfills would normally be located on property owned by the waste generator and would preferably be situated within a short distance of the generating facility, thereby reducing hauling costs, which can be a significant portion of the overall waste-handling cost. Modern landfills are ideally located in areas with sound (non-karst) foundations and with moderate slopes and ample surrounding area, which lends itself to support functions for the operation: Truck scales, maintenance buildings, miscellaneous storage areas, leachate collection facilities, groundwater monitoring systems, survey monumentation, and other important features would be located on the periphery of the disposal area.

Within the disposal boundary, construction would typically start with regrading of subgrade soils along with some compaction to enhance the foundation. This may involve moisture control as it relates to soil type and conditions as found when compared with laboratory testing for optimum conditions of the material during placement in order to achieve near-maximum dry density. The soil component would normally be targeted to achieve 95% compaction based on a standard laboratory proctor test of the material. This would enable the soil to be placed at desirable low-permeability conditions and with minimal future densification or settling.

Once the soil foundation is addressed and significant obstructions, such as rocks, are removed from the surface, geosynthetics would be placed. Note that some landfill liner systems may be constructed over existing ash fills, thus the underlying material would likely be clean and might only require some regrading, using the same logic for placement control mentioned above. Depending on site conditions, the regulatory environment, and the philosophy of the design engineer, a geosynthetic material may then be placed as a cushion layer to protect the continuous membrane that would follow.

The membrane layer is carefully laid in place, numbered and tracked for traceability, and seamed to create a continuous watertight containment for the waste site. Today, a one-layer system is standard, based on the regulatory interpretation of coal ash and its potential effects on the environment.

The liner system will typically include a drainage layer that may consist of a double-sided geocomposite, graded aggregate to prevent clogging and to enhance collection of leachate (the water that comes in contact with the waste during fill progression), and a piping system used to accumulate the leachate and direct it away from the waste fill and into a treatment area. These parts of the landfill may be constructed using various material types, such as different aggregate materials or different weights and designs of geocomposites. However, the goal of this part of the system is to manage the water predicted to accumulate at the waste/membrane interface, thereby ensuring a drier and more stable fill that offers less opportunity for leakage outside of the containment system.

Once the bottom of the landfill is constructed in careful compliance with the project plans, specifications, and regulations, complete and thorough documentation is provided to the regulatory agency for review and approval. If the submittal package satisfies the examination process, the state agency will likely provide a Certificate to Operate, or similar documentation, offering approval of construction in the cell or working area as completed. Upon receipt of the Certificate to Operate, the owner can begin disposal of wastes.

Adding CCPs to the Landfill

The disposal process involves planned placement of CCP wastes such that lifts are properly developed, stormwater and leachate are readily controlled, air space (the term for approved storage volume) is maximized, and future development is enhanced. The owner, or his authorized agent/contractor, must demonstrate control over dusting and tracking as part of the placement of ash wastes.

Operation of an acceptable landfill is a significant undertaking and requires attentive, knowledgeable personnel to maintain compliance. A qualified person will be required to oversee operations and maintain accurate records of disposal activities. Records will include information such as daily quantities placed by date, descriptions of material placed, and an approximate location of placement activities within the approved boundaries. The landfill permit will document other necessary inspection requirements such as regular measurements of in-place density of the waste.

Project closure will be much like cell construction: development of proper grades, followed by application of geosynthetics per permit drawings and documents, followed by placement of soil cover with seeding and mulching to establish vegetative cover (Figures 2 and 3). Forms of erosion control may be applied in accordance with plans that would have been designed according to flow characteristics. These requirements would be incorporated into surface treatments and constructed in accordance with plans and specifications. The result will be a finished project that meets regulatory agency requirements and the owner’s needs. 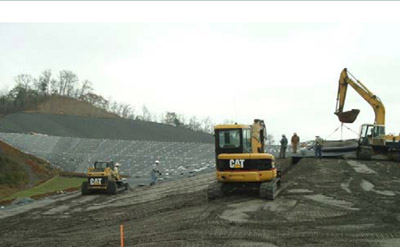 2. Finish grading of ash on a slope of the landfill is part of the closure process. Note the flexible synthetic membrane cap being placed into an anchor trench with additional material sandbagged as a temporary construction measure in the far background. Courtesy: Skelly and Loy Inc. 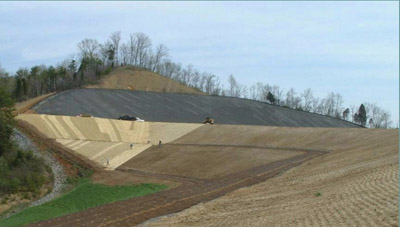 3. Topsoil is placed by a bulldozer on the landfill slopes to cover the geosynthetic closure materials. Note the erosion mat being unrolled and stapled into place in the far background to stabilize vegetation. Courtesy: Skelly and Loy Inc.