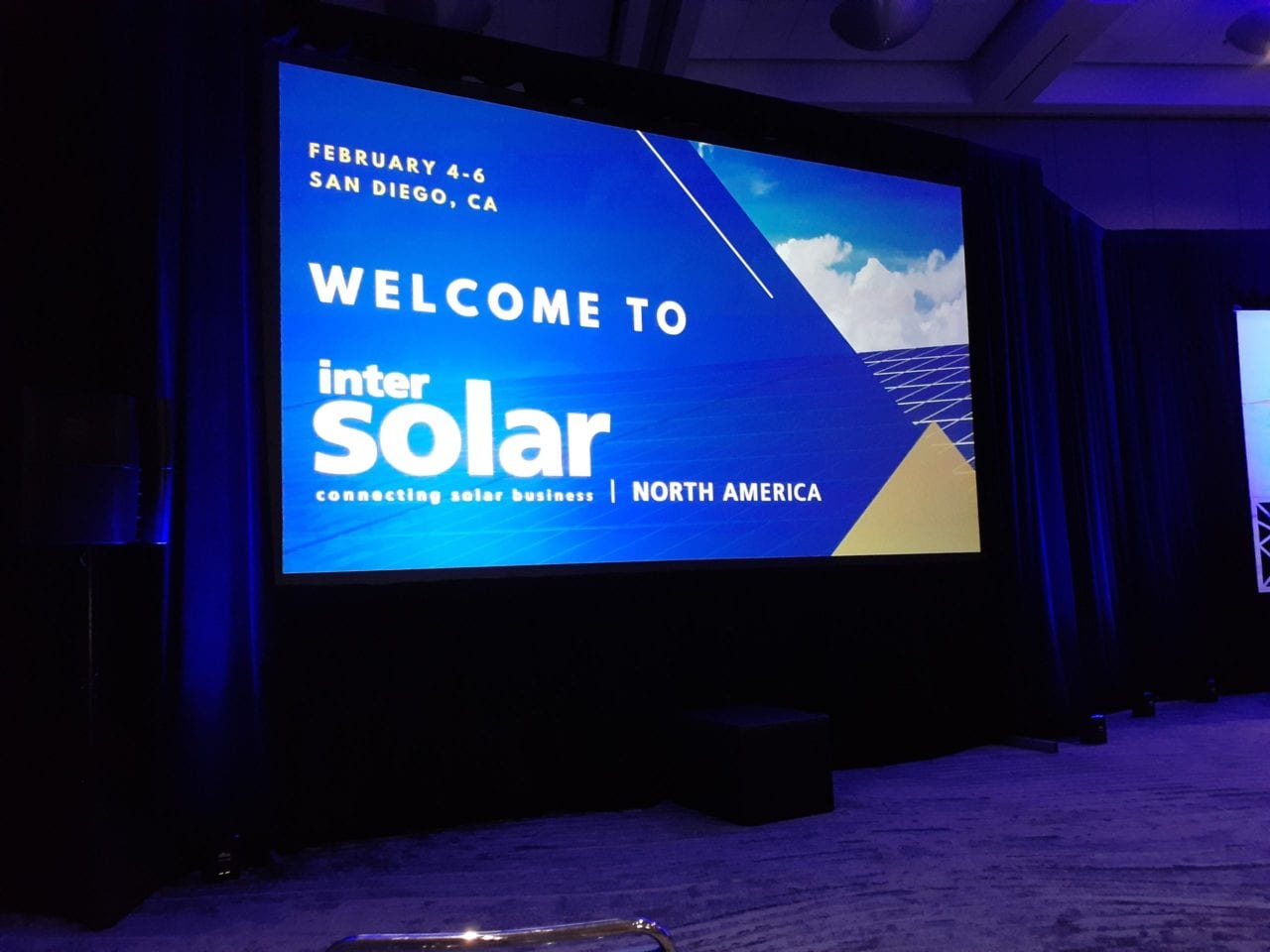 The technology behind solar power is changing rapidly. Researchers at the University of California, Davis have said so-called “anti-solar” panels could even generate power at night.

But even as solar deployments grow worldwide, more innovative solar products are launched, and more governments enact clean energy mandates, political headwinds threaten to slow the progress of the past few years. David Hochschild, chair of the California Energy Commission, knows that all too well.

“We have a White House that is in retreat on the greatest issue facing our world,” Hochschild said Feb. 4 during his keynote address at the InterSolar North America conference in San Diego, California. Hochschild said climate change is a global threat that must be addressed, even if some lawmakers and countries continue to support the use of fossil fuels.

“The leadership for clean energy now rests with the states, and at the local level,” Hochschild said. He compared U.S. and global support for clean energy to the anti-apartheid movement in South Africa, where he lived in the 1990s during a turbulent period in that country’s history. Hochschild said the fall of apartheid had much to do with the loss of economic support for South Africa by those companies that opposed the country’s system of segregation and discrimination.

“This trend toward clean energy started in the 1980s, but has really taken off in the past few years,” Hochschild said. He noted that Hawaii’s move in 2015 to have 100% clean energy by 2045—the first U.S. state to establish a 100% clean energy mandate—created a path for other states and cities to follow.

“With more states and cities setting clean energy goals in the last year, today 30% of the U.S. population is living in an area with a clean energy mandate,” Hochschild said. “Fossil fuels are alternative energy now, and renewables are mainstream.”

Danny Kennedy, CEO of New Energy Nexus, formerly the California Clean Energy Fund, also addressed the conference Tuesday, discussing what he called “the electrification of everything,” which he said will require what the industry calls “Technology X,” or technology not yet on the market. Kennedy said those technologies need to be proven this decade so they can be deployed in 2030 and beyond.

New Energy Nexus supports companies working on new energy innovations worldwide. “We’re funding start-up businesses to promote clean energy,” Kennedy said. He cautioned, though, that carbon emissions are a global problem and must be approached as such, which is why his group expects the bulk of its funding to be earmarked for Asia and Africa, two areas where much of the population today does not have access to power, and where power generation is often tied to coal plants.

Kennedy cited Indonesia as an example of where clean energy needs to make inroads. “Indonesia is a country of 300 million people,” he said. “They burn coal, and where they can’t burn coal, they use diesel gensets [generators], and that’s worse than coal.” He said if countries such as Indonesia don’t move toward clean energy, efforts by other countries to combat climate change, including the U.S., could prove futile.

Kennedy said the solar industry must be prepared for the end of investment tax credits (ITCs) that have spurred the industry’s growth in the U.S. The ITC for residential solar installations ends in 2022, and drops to 10% for commercial projects then, down from 26% today. He said those credits have helped keep project costs in line, but new strategies will be needed to maintain industry growth when the credits—and he doesn’t foresee another extension of the ITC—go away in 2023.

Hochschild said “one thing I would like to see is the solar industry partnering more broadly” with other clean energy groups to promote not only solar but also associated technology, such as energy storage, to help offset some of the costs that could rise as the credits expire.

Kennedy said solar projects “will see costs increase by a third unless we reduce the ‘soft costs,’ ” which he said include the costs of permitting and marketing projects. He said he supports efforts such as SolarAPP, a program from The Solar Foundation that the group says “will create a low-cost, seamless process for rooftop solar and solar+storage installations, while enhancing safety and reliability. This will make solar energy more affordable and accessible for homeowners and businesses.”

Kennedy said his group’s CalSEED project—the next round of applications begins Feb. 28—is one of the ways New Energy Nexus is “empowering clean energy.”

As for those solar panels that would create energy at night? The research was published in the journal ACS Photonics. The researchers said: “In order to produce electrical power after the sun has set, we consider an alternative photovoltaic concept that uses the earth as a heat source and the night sky as a heat sink, resulting in a ‘nighttime photovoltaic cell’ that employs thermoradiative photovoltaics and concepts from the advancing field of radiative cooling.”

In effect, it’s a heat engine, and one of those Technology X creations referenced by Kennedy.

Hochschild also talked about what the future may hold, particularly in California, a state that as of Jan. 1 of this year mandates rooftop solar on new home construction. “People like the idea of powering their cars from their rooftop,” Hochschild said.