The co-combustion of biomass and coal in utility boilers has been proven an effective and cost-efficient method for reducing greenhouse gas (GHG) emissions. Those benefits come with serious technical difficulties that are associated with the substitution of biomass for coal, specifically, difficulties related to the material property differences of the two feedstocks, given that typical system designs assumed coal feedstock only.

As these feedstock physical properties differences can have an impact on such important furnace properties as flame profile and maximum temperature, it is appropriate to begin with a brief discussion of them.

The most commonly discussed biomass feedstocks include corn stover, sugarcane bagasse, hard and soft woods, bamboo, switchgrass, miscanthus, and animal byproducts. We will not discuss animal byproducts here, as their application is limited to circulating fluidized bed boilers, which are not included in the scope of this study. The remaining feedstocks are to be compared with the two common coal types: bituminous and subbituminous. In the broadest sense, one can generalize that biomass feedstocks have:

The table summarizes the fuel feedstock properties for some of the most common biofuels. As these differences are embodied in the furnace of the boiler and in downstream equipment, several serious issues can arise. In the following sections we go through these issues in turn.

The most common type of utility boiler is the pulverized coal combustion boiler (Figure 1). The feeding rate of coal and the amount of air available for drying and transporting the pulverized coal fuel is controlled by computers according to the boiler demand. Pieces of coal are crushed between balls or cylindrical rollers that move between two tracks or "races." The raw coal is then fed into the pulverizer along with air heated to about 650F from the boiler. As the coal gets crushed by the rolling action, the hot air dries it and blows the usable fine coal powder out to be used as fuel. The powdered coal from the pulverizer is directly blown to a burner in the furnace of the boiler. Under typical operating conditions, there is enough heat in the combustion zone to ignite all the incoming fuel. 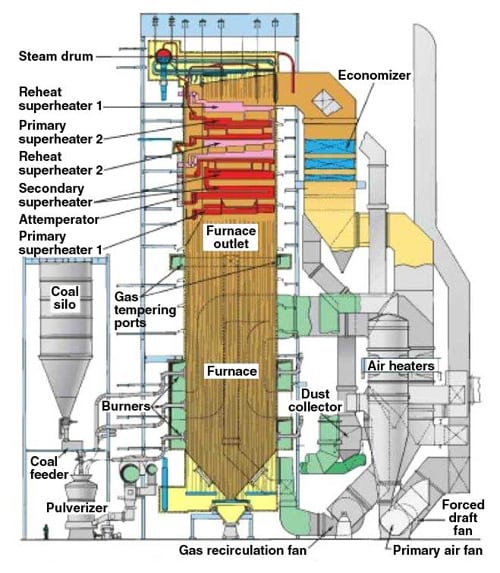 The first issue in this process of substituting biomass for coal is the result of the lower heating values of typical biomass feedstocks. As seen in the table, the HHVs of typical biomass fuels are 10% to 40% lower than comparable coal HHVs. This results in the need for more biomass, on a mass basis, to replace an equivalent amount of coal, on an energy basis. Combustion air demands remain relatively unchanged. The result is that individual burners must adapt to higher-than-design fuel mass flows.

Biomass particles vary quite dramatically in size, shape, and density but are typically larger, more irregularly shaped, and less dense than comparable coal particles due to difficulty in processing. In addition, they have high volatile matter and water content, as can also be seen in the table. To understand what effect these properties have on combustion, we should provide a brief summary of solid fuel combustion. Figure 2 neatly summarizes the sequential steps in this type of combustion. 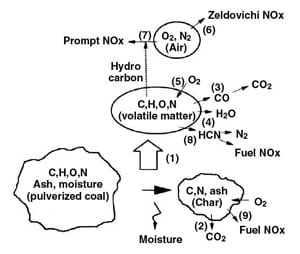 The first step required is the driving off, via evaporation, of moisture within the fuel particle. After this occurs, the volatile matter at the particle’s surface begins to undergo pyrolysis (devolatilize or degas) as further heat is absorbed. The volatile matter is quickly consumed via an oxidation (combustion) reaction with available O2. After the last of the volatile matter is driven off, the remaining fixed carbon content is free to oxidize similarly. The solid particle that remains after complete combustion is known as ash.

Many competing dynamics influence differences in coal and biomass combustion dynamics, the most obvious of which is that higher moisture content will delay devolatilization and combustion. In the most extreme cases, this delay may cause flame separation from the wall, which can negatively affect NOx production and flame stability.

In contrast and competition with this delay are the properties of larger particle size and higher volatile matter by mass percentage. These properties increase the rate of devolatilization (as a function of available surface area) and rate of heat release (as a function of volatile matter oxidation being the faster oxidation reaction) as compared with coal.

Additionally, if particles become prohibitively large (>1,000 microns), their ability to remain entrained in the flow can become an issue and they may fall into the bottom of the boiler. At intermediate sizes, particles may carry farther into the boiler than the design coal, impinging on boiler tube walls or exiting unburned in some cases.

The fuels’ lower heating values, coupled with the properties described above, cause changes to the flame shape and temperature profile within the boiler when significant quantities of biomass are being integrated. Because many of the properties and dynamics described above are in competition, it is impossible to describe a generic expectation for boiler operational differences with respect to the baseline condition. Conditions will be dependent upon the specific embodiment of the application.

Additional complications arise due to the various chemical constituents that are present at considerable levels in biomass that are not seen in coal, including the alkali and alkaline-earth metals (potassium, sodium, calcium, and magnesium), and phosphorous and chlorine. Chlorine is particularly harmful due to its known propensity to enhance fine ash formation, and it produces a dangerous mechanism for transportation of potassium and other constituents, which can be harmful to downstream equipment.

Secondly, the increased concentrations of alkali and alkaline-earth metals, especially potassium and calcium, act to lower the ash fusion, or melting, temperature. This typically results in increased boiler slagging (boiler tubes becoming covered with liquid ash, which is not easily displaced and can harden) and reduced boiler efficiencies.

Almost exclusively (and except in the rare case where pilot tests can be performed), the only way to investigate the expected quantitative effects of "what if" scenarios for cofiring biomass is through the use of computational modeling of the combustion process. The following figures correspond to a computational fluid dynamics (CFD) model study of a 32-MW wall-fired pulverized coal (PC) unit and compare flame conditions from baseline to a modified case where 20% wood chips are co-fired (Figures 3 and 4). CFD can be used to provide quantitative comparisons of many critical parameters, including maximum wall surface temperatures, levels of unburned carbon, and concentrations of emissions. 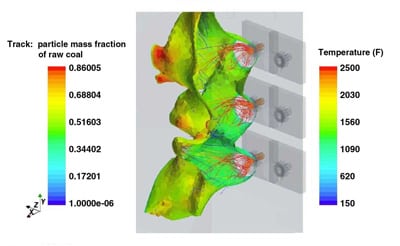 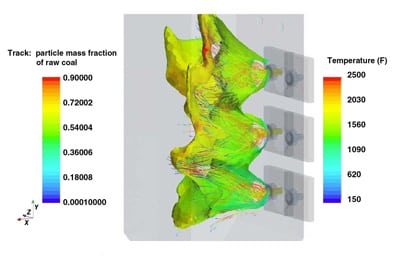 SCR is the most efficient post-combustion NOx reduction technology and entails injection of NH3 into the flue gas downstream of the boiler and reaction with NOx upon a catalytic substrate at temperatures generally between 550F and 750F. In general, the following reactions are responsible for NOx reduction:

NOx reduction efficiencies as high as 95% have been achieved in the most favorable cases.

Perhaps even more than boiler operation, SCR functionality is challenged by the co-combustion of biomass. There are many technical difficulties, mainly relating to the chemical constituents present in biomass that are not present in coal. The first of these challenges is the chemical deactivation of the catalyst caused by chemical attack on the active sites of the catalyst. The second is the small-scale plugging of catalyst micropores caused by the agglomeration of very fine scale ash, aerosols, and condensate. These two types of "poisoning" are diagrammed in Figure 5.

Perhaps the most important aspect of biomass co-combustion as it relates to the operation of SCR is the increased hygroscopic, or hydrophilic, nature of the fly ash produced coupled with higher levels of water vapor and catalyst poisons in the flue gas. It cannot be stressed enough that the catalyst should be kept warm and dry under all circumstances so that the ash that is inherently going to settle on the catalyst during shutdowns does not become moist and saturate the catalyst’s pore system. This ash will contain poisons such as potassium, phosphorous, and sodium that will chemically blind the active sites. Keeping the catalyst dry can be accomplished through the dual use of preheated airflow through the catalyst for a predetermined time period before flue gas is introduced and filling the reactor with hot, dry air during layup periods.

In addition, these same poisons (potassium, phosphorous, and sodium) that are not absorbed onto ash particles will readily oxidize during the combustion process and form aerosols that also allow chemical attack of the pore system. Alkali-metal aerosols formed during combustion of biomaterial are well known to be able to severely impact the performance of SCR catalysts, physically blinding the catalyst pores through formation of sulfates where both are present in significant concentrations. These sub-micron particles adhere to the surface of the catalyst and are readily transported to the active sites by surface diffusion. Spectroscopic studies suggest that the poisoning mechanism occurs via chemical bonding of the alkali metal to the crucial V-OH sites, the so-called Brønsted-acid sites, which also adsorb and "activate" the ammonia, forming V-OM (M being K or Na) and thereby blocking the catalytic cycle.

If potassium levels are extreme, the ash fusion temperature can approach SCR operating temperatures, and such a condition will quickly lead to complete deactivation of the catalyst. The use of a particular variety of straw at one unit resulted in significantly accelerated catalyst deactivation, with 45% activity loss in 10,000 operating hours. All of these conditions are best accounted for in the process design of the SCR.

Co-firing biomass will also change the nature of the fly ash. Fines will become smaller, predominantly <10 micron, and can become stickier as they form sulfates on the catalyst. These changes make it more difficult for the ash to flow efficiently through the reactor. If the fly ash does not flow through the catalyst, it will be subject to the second pathway to deactivation: fly ash pluggage. It cannot be overstated that proper flow design, through CFD and experimental fluid dynamics modeling, is a relatively low-cost tool to ensure that ash flows through the reactor efficiently.

If a current SCR reactor experiences ash pluggage issues, then expect cofiring of biomass to exacerbate this situation.

FuelTech has developed specific technology for ensuring proper flow conditions through the catalyst, including the reactor flow distribution device known as the Graduated Straightening Grid (GSG), as shown in scale model testing in Figure 6. In addition, the use of either sootblowers or sonic horns (preferred) is a necessity for keeping the ash fines excited as they move through the catalyst layers. 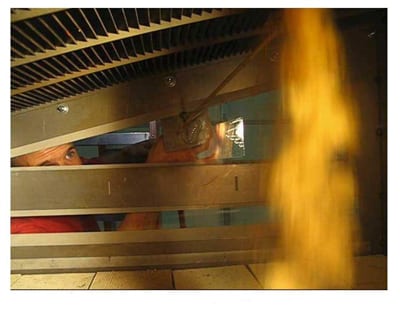 Cofiring biomass also has shown the tendency to increase the prevalence of what is commonly referred to as large particle ash (LPA). These particles are typically highly porous agglomerations, or fusions, of ash particles, which can range in size from microns to over 10 millimeters. Due to their low density, they remain primarily entrained in the flue gas flow and can reach the catalyst if nothing is done to prevent this. There they will quickly plug the catalyst channels, disrupting the flow to the remainder of the reactor and quickly causing major problems. The solution to this problem is the intelligent design of LPA-capturing devices, including LPA screens that are optimized via fluid dynamics modeling. Figure 7 shows such an installation, as well as a typical sample of LPA.

A cost evaluation by the Electric Power Research Institute has shown that for modest cases of catalyst deactivation, typical of 10% to 20% biomass firing, the impact during a 15-year period for additional catalyst replacement could be 20% to 60% of the original SCR cost.

The following observations have been made during the course of the authors’ experience with cofired biomass applications, modeling, and SCR evaluations:

—S.A. Bible and Volker Rummenhohl are with FuelTech Inc., and Pierangelo Ponzoni is with FuelTech SRL (Varese) Italy. A PowerPoint file that augments this paper is available here.