There are many different types of fuel cells, and each has characteristics that make it more suitable than others for certain applications. For example, because molten carbonate fuel cells operate at high temperatures (above 600F), one of their byproducts is heat, which can be used to help drive combined heat and power (CHP) systems.

At the other end of the size spectrum, the low-current output of low-temperature liquid methanol fuel cells can be used to power consumer electronic devices such as MP3 players, cellular phones, or laptop computers. This type of fuel cell requires that a supply of highly concentrated methanol fuel be replenished on a regular basis.

Today, much of the fuel cell industry’s R&D efforts are focused on proton exchange membrane (PEM) fuel cells, which run on hydrogen and operate at relatively low temperatures (Figure 1). These types of fuel cells are very compact, produce a surprising amount of current for their size, and can rapidly respond to load fluctuations. Even the demanding U.S. Navy is investigating the use of PEM fuel cells for shipboard power generation (see article on p. 46)

1. PEM schematic. A fuel cell converts chemical energy from hydrogen (H2) and oxygen (O2) into electrical energy. As each hydrogen molecule moves through the anode catalyst, it is stripped of one electron. Later, at the cathode, the ions are combined with oxygen to form water.
Source: Platts; concept from Fuel Cell 2000

PEM fuel cells have long been regarded as the leading candidate to replace the internal combustion engine in cars because of their quick ramp-up time. Although some types of fuel cells take a long time to begin producing useful amounts of electricity, PEM fuel cells begin doing so almost immediately after being supplied fuel. This feature, along with their absence of air pollution emissions, is what gives PEM hydrogen fuel cells an advantage over common sources of backup power such as batteries and diesel engine-generators.

Pay me now or pay me (more) later

The most significant barrier to mass adoption of fuel cells remains their capital cost. However, in many industries, concerns about cost are offset by the potential loss of revenue that would result were a blackout to shut down operations.

Though utility grids provide reliable service 99.9% of the time, they still leave customers without power nearly nine hours a year, on average. The costs of these blackouts can be extremely high. According to a 2000 study by META Group Inc. (Stamford, Conn.), a retailer’s average hourly cost of downtime is $1.1 million. For financial services firms, manufacturers, and telecommunications companies, the hourly costs are even higher: $1.4 million, $1.6 million, and $2.0 million, respectively.

Compared with batteries of the same rating, hydrogen fuel cells are smaller and significantly lighter. The dramatic difference in power density becomes apparent as backup time requirements increase. For example, a 10-kW fuel cell power system (Figure 2) from Toronto-based Hydrogenics Corp. is warranted for more than 1,000 hours of operation—far beyond both the capability of current-generation battery technologies and the expectations of backup power system buyers. Hydrogen-powered fuel cells also are very quiet; at a distance of 3 feet, many fuel cell systems register only 65 decibels on a noise meter, allowing them to be located right inside a data center.

2. Pint-size potency. This 10-kW PEM fuel cell, which packs a powerful punch for such a small unit, is suitable for a wide range of mobile, stationary, and portable applications.
Courtesy: Hydrogenics Corp.

Cellular tower sites and data centers are excellent real-world examples of where fuel cells can provide backup power today. In addition to the power required to run the site’s electronics, many of those sites require air conditioning to avoid overheating sensitive equipment. Batteries could power the electronic equipment but probably not the air conditioners’ compressors as well.

Recently, Hydrogenics sold twenty-five 13-kW fuel cell modules to a major manufacturer of uninterruptible power supplies (UPS) for field trials. And earlier this year Hydrogenics began working with Montreal-based Bell Canada and St. Louis–based Emerson Network Power Group on a fuel cell project for a cellular phone tower. Plans are for the project to use a 7-kW fuel cell system to provide backup power to a cellular tower in Toronto.

The project will be similar to a demonstration Hydrogenics and Nextel Communications undertook at a cell tower site in California’s Carneros Valley (Figure 3). There, a 25-kW regenerative fuel cell system was installed to provide 6 kW of backup capacity for the cellular tower and—when required—another 4.5 kW to power the site’s air-conditioning system. 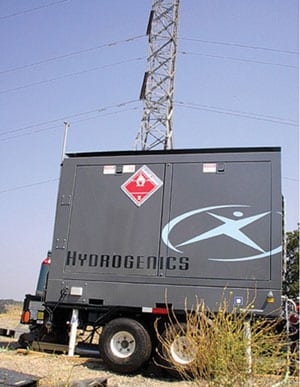 There was enough hydrogen on site to fulfill the requirements of a typical cellular tower site—25 kW for two hours at full load. But because the site only requires 10.5 kW, including air conditioning, it was demonstrated that the fuel cell could provide up to 4.5 hours of backup power. Had the site needed the fuel cell to run longer, additional hydrogen tanks could have been added easily.

The demonstration project lasted two months and simulated about five years’ of grid failures. Hydrogenics’ engineers regularly simulated power failures that lasted up to 4.5 hours, and Nextel tested the fuel cell once a week during scheduled blackouts that tested the towers’ backup power systems. During the demo, a remote alarming and telemetry system designed by Nextel and integrated by Hydrogenics monitored system performance and modes so engineers did not need to be on site at all times.

Meeting cost and other challenges

As mentioned, fuel cells’ biggest challenge remains their cost. Only a handful of companies manufacture fuel cell modules—one at a time. Once fuel cells can be mass-produced by a fully automated process, the economies of scale will kick in and their price will fall—similar to what happened with semiconductors.

Meanwhile, fuel cell technology is advancing at a tremendous pace. Modules manufactured today are significantly smaller and less expensive than those manufactured 18 to 24 months ago. For example, the cost of Hydrogenics’ HyPM power modules has fallen by 50% in each of the past two years.

Another challenge for fuel cells is validating their environmental credentials. Although operation of the cells themselves produces only water, if a reformer is used to extract hydrogen from a fuel like gasoline, air pollution will be the result.

Nonetheless, Robert Rose, executive director of the U.S. Fuel Cell Council, says, "Being skeptical of the potential of the hydrogen [economy] today is roughly equivalent to having looked at the 19th-century telegraph network and concluding that we could never have an Internet. Back then, from that perspective, it would have been reasonable to conclude that even if enough telegraph operators could be found, it would take them too much time to tap out all that content in Morse Code