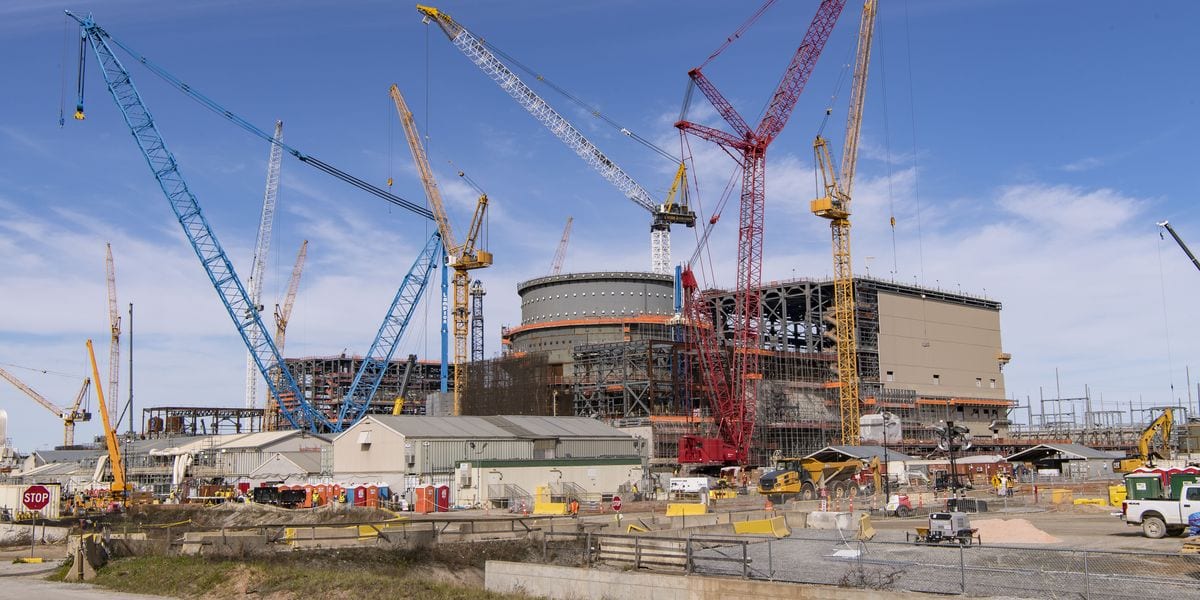 Energy Secretary Rick Perry on March 22 said his department will guarantee up to $3.7 billion in additional loans to finance continued construction of two new nuclear reactors at the Vogtle plant in Georgia. While Perry and other government officials stressed the importance of the project to the U.S. nuclear industry, critics called it a case of “throwing good money after bad.”

“The Vogtle project is critically important to supporting the [Trump] administration’s direction to revitalize and expand the U.S. nuclear industry,” said Perry on Friday in a ceremony at the Vogtle site near Waynesboro, Georgia. “A strong nuclear industry supports a reliable and resilient grid, and strengthens our energy and national security. As I’ve witnessed firsthand today, Vogtle is also an energy infrastructure project with a massive scope employing thousands of workers. This project is rebuilding a highly skilled U.S. nuclear workforce and supply chain for the future.”

Several environmental and energy groups oppose the loan guarantees, including the American Energy Alliance (AEA), whose president, Thomas Pyle, said in a statement, “We oppose federal loan guarantees for any energy source, period.”

A number of government officials were present at Friday’s announcement, including current Georgia Gov. Brian Kemp and former Georgia Gov. Sonny Perdue, now the nation’s secretary of agriculture. The announcement of the latest loan guarantees for the project coincided with the topping off of one unit, as a 130-foot diameter cap—weighing nearly 1.5 million pounds—was maneuvered by crane and lowered to cap the containment vessel for Unit 3.

Southern Co. CEO Tom Fanning, whose company is the parent of Georgia Power and whose Nuclear Solutions Co. is overseeing the construction, said Friday that Unit 3 is about 75% complete, and would be 90% finished by the end of this year. He said the unit will be ready for fuel loading in 2020.

Unit 4 of the project is not as far along, with much of its containment vessel still to be built.

Perry on Friday said the Department of Energy (DOE) issued loan guarantees of $1.67 billion to Georgia Power; $1.6 billion to Oglethorpe Power Corp. (OPC); and $415 million to three subsidiaries of the Municipal Electric Authority of Georgia (MEAG). Georgia Power owns 45.7% of Plant Vogtle. Three other project partners—OPC, MEAG, and the City of Dalton Utilities, own the remaining 54.3%.

The DOE has now guaranteed as much as $12 billion in federal funds for the project, including $8.3 billion in loans from the Obama administration to the plant’s owners in 2014 and 2015.

“Since the project began, we have committed to minimize the impact these new units will have on customers’ bills,” said Paul Bowers, Georgia Power chairman, president and CEO. “Securing these loans plays a key role by reducing our financing costs and passing along these benefits to our customers.”

Pyle of the AEA in a statement said, “Nuclear power is an important part of our nation’s energy mix, but the federal government shouldn’t be in the business of providing loans for any energy source. Instead, it should stay out of energy markets and work to remove government subsidies and mandates to allow all energy sources to compete on a level playing field.”

He continued: “The Trump administration has submitted a budget request that eliminates this loan program. We hope Secretary Perry will align the Department of Energy with the President’s priorities and fight for his budget on Capitol Hill.”

Ryan Alexander, president of Taxpayers for Common Sense, a nonprofit federal budget watchdog group, in an email to POWER wrote, “Just days after the Trump Administration released its annual proposal to end the loan guarantee program, the Department of Energy is handing over $3.7 billion in taxpayer-backed loan guarantees to the long-troubled Vogtle nuclear reactor construction project. It would be a gross understatement to say this decision is fiscally reckless.

“Putting the full faith and credit of the US Treasury behind a project after it’s been plagued by sky-rocketing costs and multi-year delays is an unjustifiable handout to the well-heeled Southern Company and its partners,” Alexander wrote. “Throwing good money after bad is never good policy. Time and again the Vogtle nuclear reactor project has proven itself to be far too risky of an investment for taxpayers. Project delays and cost increases are measured in YEARS and BILLIONS with no end in sight.”

Fanning in February said the expansion project—the two new reactors will join Units 1 and 2 at Vogtle, which have operated since 1987 and 1989, respectively—is rapidly moving forward, noting Unit 3 could come online in April 2021, with Unit 4 following a year later. That timeline is seven months ahead of the regulatory approved schedule for the reactors. There are about 7,000 workers currently at the site.

The construction of Units 3 and 4 at Vogtle, which includes two AP1000 reactors, is the only advanced nuclear energy construction project currently underway in the U.S. Construction of new nuclear power plants waned due to opposition to nuclear power after the Three Mile Island accident in 1979, and as natural gas-fired power generation took away market share.

A similar nuclear construction project of two AP1000 reactors in South Carolina was abandoned in 2017 due to rising costs. (For an interactive look at U.S. nuclear projects that have been canceled over the past few decades, see THE BIG PICTURE: Abandoned Nuclear, in POWER’s February 2018 edition.)

The Vogtle project, originally approved in 2009, is about five years behind schedule, and estimates of its cost have doubled to about $28 billion as construction has dragged on. The original project leader, Westinghouse, filed for bankruptcy in 2017 due to financial problems associated with the Vogtle construction.

“The combination of uprates, shorter outage durations, and balance-of-plant thermal efficiency improvements led the U.S. nuclear power fleet in 2018 to see its highest capacity factor on record, at 92.6%,” the EIA said. The agency noted, though, that the 2018 record is likely to stand with only the two reactors at Vogtle expected to come online in the near future, and the capacity of those reactors will not offset the closing of another 12 reactors by 2025, based on currently announced retirements.

The only new nuclear plant to come online in the U.S. in the past two decades is the Tennessee Valley Authority’s 1.2-GW Watts Bar Unit 2, POWER’s Top Plant in 2018. The EIA said seven nuclear plants with combined capacity of 5.3 GW were retired between 2013 and 2018.