Opening of the 194-MW Lynn and Inner Dowsing wind farms built by UK energy company Centrica off the coast of Skegness, in Lincolnshire, this October made the UK the worldwide king of installed offshore wind capacity. The farms raise the total electricity generated from offshore wind in the UK to 590 MW, beating Denmark’s 423 MW.

The UK plans to add an additional 938 MW of offshore wind power to the grid by the end of 2009 through five massive wind farms. To date, the UK’s offshore wind sector produces 20% of its 3 GW of installed wind capacity. Wind has already overtaken hydropower as the second-largest renewable energy generation source in the UK. The country experienced a 30% growth (90 MW) in offshore generating capacity between 2006 and 2007 alone, the UK’s energy department said in August.

But the future doesn’t look so bright, and the government’s ambitions to make wind power a major part of its portfolio could be on the brink of failure, said Carbon Trust, a government-funded but independent think tank, in October. In its report, "Offshore wind: big challenge, big opportunity," the organization said that the UK would build only a quarter of the 29 GW of offshore wind farms needed to reach its target of getting 15% of the nation’s energy from renewable sources by 2020 — unless the UK government acted urgently to reduce costs and risks to developers.

Carbon Trust recommended a relaxation of the constraints that dictate where offshore wind farms can be built, a factor that could cut a stunning £16 billion (about US$27.4 billion) from the overall cost of developing offshore wind. Erecting turbines in potentially restricted waters would alone reduce costs by more than 20%, the report suggested. Other recommendations included removing grid and regulatory barriers, increasing public R&D funding, and modifying the current incentive mechanism. The report concluded that these measures collectively could save up to 40% of costs, slashing £30 billion from the total cost of development, which in turn could make offshore wind power competitive with conventional generation before 2020.

Analysts agreed that unrealistic goals were among the issues that could blight the government’s ambitions. The UK raised its target for reduced greenhouse gas emissions by 2050 from 60% to 80% in October, but the country’s current target to produce 15% of all electricity from renewables by 2020 alone would require that wind power — which currently constitutes about 4% of the UK’s power generation — expand to 36% within 12 years. To achieve this, the industry would need to build nearly 15,000 turbines, generating 35 GW of electricity, on land and at sea. The country is already experiencing a "severe shortage" of engineers, and companies are reviewing their commitments to wind energy because of spiraling costs. Analysts fear that the result could be power shortages by 2020, a failure to meet change and energy targets, and possible fines from the European Union.

Despite these hurdles, investments in UK offshore wind power projects continued to burgeon. This October, Masdar — Abu Dhabi’s multimillion-dollar clean technology initiative — announced it would grab a 20% stake in the largest of the UK’s planned offshore wind farms, the London Array. This project had been proposed for a 90-square-mile site 12 miles off the coast of England, in the Thames Estuary. When fully completed, the project could contain up to 341 turbines, which would generate about 1 GW of electricity. The project will reportedly cost £2.5 billion. Royal Dutch Shell had pulled out of the project in May and was looking to sell its third of the venture. Shell’s former partners, Germany’s E.ON and Denmark’s Dong Energy, currently own the whole project.

Construction has also begun on the onshore infrastructure for the 504-MW Greater Gabbard offshore project in the outer Thames Estuary. A division of Germany’s RWE AG, npower renewables, recently acquired 50% of that project from British utility Scottish and Southern Energy. That wind farm is scheduled to be fully functional by 2011.

In November, Swedish state-owned power group Vattenfall announced it had acquired the rights from CRC Energy Jersey 1 Ltd. to build the Thanet offshore wind farm, a £780 million project that would use a hundred 3-MW turbines to produce some 300 MW. Germany’s Siemens and consortium partner Prysmian Cables & Systems had earlier been awarded an €87 million order from Thanet Offshore Wind Ltd. to connect the wind farm to the UK power grid from its location 6.8 miles off the coast of Kent in the North Sea (Figure 3). Siemens said it would have the farm’s connection to the grid ready for operation by the summer of 2009. 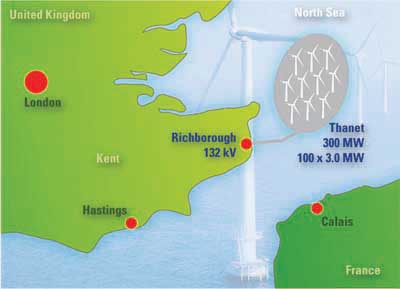 3. An offshore connection. One of the UK’s giant offshore wind projects, the Thanet Offshore Wind Farm–a 100-turbine installation that is expected to produce about 300 MW–will be constructed 6.8 miles off the shore of Kent in the North Sea. Vattenfall recently acquired the rights to build this project. Courtesy: Siemens

As part of the grid connection, Siemens is building an offshore substation platform, which it said will be the world’s largest to date, and the first with more than one power transformer. A 33/132-kV substation with two 180-MVA power transformers will be installed on this platform. Prysmian will supply two 132-kV high-voltage subsea cables to transport the electrical power to the grid connection point, a new high-voltage switching station, which will be built by Siemens in Richborough, Kent.