President-elect Donald Trump has picked Oklahoma’s Republican attorney general, Scott Pruitt, to head the Environmental Protection Agency (EPA), the New York Times reported Wednesday afternoon, citing a transition official. The report had not been officially confirmed or denied as this article was written. 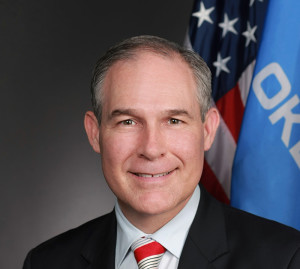 Pruitt, 48, is a long-time supporter of the fossil fuel industry, which is hardly surprising given Oklahoma’s position as a leading oil and gas producer. He has also been a leading figure in one of several Republican battles against the Obama administration’s Clean Power Plan, a 28-state lawsuit seeking to block the EPA’s efforts to clamp down on carbon dioxide emissions from existing power plants. Harold Hamm, a billionaire chief of Continental Energy, with major interests in North Dakota’s Bakken shale production and rumored to be Trump’s pick for energy secretary, was co-chairman of Pruitt’s reelection campaign in 2014, the Times reported.

A Kentucky native, Pruitt attended law school at the University of Tulsa and entered private practice in Tulsa in 1993. After five years, he was elected to the Oklahoma Senate, where he was Republican whip from 2001 to 2003 and assistant floor leader until he left office in 2006. While still a freshman legislator, he sought to succeed Republican Rep. Steve Largent, a member of the NFL Hall of Fame, losing in the GOP primary. In 2006, Pruitt ran to replace the outgoing lieutenant governor, Mary Fallin, who ran successfully for governor. He again lost in three-way primary runoff election.

But Pruitt won his 2010 race for attorney general and was reelected in 2014. During his service, he has been a dependable conservative, challenging the Affordable Care Act in court, trying to restrict abortion, supporting the 5-4 Hobby Lobby Supreme Court ruling that privately-held companies need not offer employees birth control as part of their health insurance plan if that is against their religious beliefs, and arguing (unsuccessfully) that the Supreme Court’s ruling in favor of gay marriage did not apply to Oklahoma.

Environmentalists immediately and predictably slammed Pruitt’s nomination to head the EPA. Michael Brune, executive director of the Sierra Club, the nation’s largest environmental group, in a written statement said, “Having Scott Pruitt in charge of the U.S. Environmental Protection Agency is like putting an arsonist in charge of fighting fires. He is a climate science denier who, as attorney general for the state of Oklahoma, routinely conspired with the fossil fuel industry to attack EPA regulations.”

Ken Cook, president of the Washington-based Environmental Working Group, said, “There has been no bigger antagonist from the states against efforts to protect public health than Pruitt. He’s sued the EPA repeatedly over the agency’s efforts to reduce the number of children who are exposed to dangerous air pollutants that can diminish brain development or trigger asthma attacks, and he has targeted programs to protect vital drinking water sources for millions of people, mostly in rural areas of the country.”

Trump, Pruitt, Both Critics of EPA

Yet those very criticisms were surely behind his selection by Trump. During the campaign, Trump repeatedly assailed the EPA, saying he would abolish it. He told Fox News in October 2015, as reported by On The Issues.org.

Q: Would you cut departments?

TRUMP: Environmental Protection, what they do is a disgrace. Every week they come out with new regulations.

TRUMP: We’ll be fine with the environment. We can leave a little bit, but you can’t destroy businesses.

So far, however, there have been no specifics about what Trump’s policies might be with regard to the EPA and environmental protection. His official website lists positions on several major issues, but the environment is not among them.

The Tulsa Times, which said it had not been able to confirm the report by the New York Times and a similar report by Reuters, did report Wednesday that Pruitt’s office confirmed he had a meeting scheduled later that day with Trump in Manhattan.

Pruitt also met with Trump in New York in November. He told the Tulsa newspaper after that meeting, regarding his prospects for an appointment, “Those discussions are ongoing. We just talked mainly about the regulatory overreach and regulatory rollback (which) affects many different areas of the federal government. It was a joy to be a part of it, very meaningful to be a part of it, and we will see what happens next.”