Although Germany’s Energiewende is all about reducing consumption and transitioning from nuclear and fossil fuels to renewable energy, it hasn’t completely halted the development of new coal-fired facilities. The Lünen plant demonstrates that even in countries keen on renewables, coal is still an important resource. 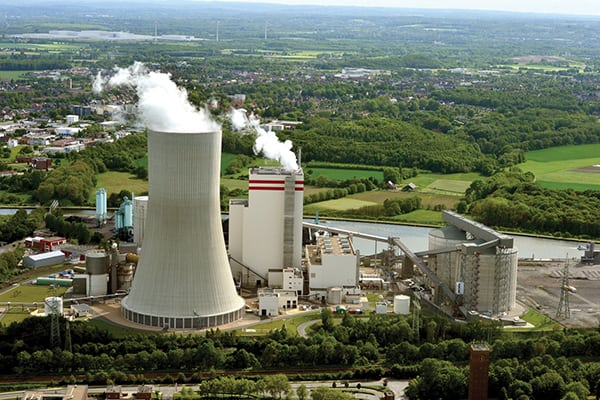 Germany’s energy transition— Energiewende —has made a lot of headlines. Whether you agree with the country’s energy policy or not, there is no denying that it has spurred the growth of renewables. Even so, change takes time, and a bridging technology is necessary if the country is to reach its goal. (To learn more about recent changes to Germany’s energy policy, see “Germany Reforms Renewable Energy Laws” listed with the August 2014 issue features online at powermag.com.)

With nuclear power clearly on the way out in Germany—eight of the country’s 17 reactors were permanently shut down months after the Fukushima disaster in 2011, and all of the others are slated to close by the end of 2022—coal-fired plants offer one proven alternative to fill the void.

A coal-processing company had previously used the site, so it was already set up with good transport connections for coal delivery. The available plot size was suitable for plant development, and the canal offered a readily available source of cooling water for the plant. In addition, a 380-kV transmission system was relatively easy to link to from the site.

Although the location offered several benefits, it also came with challenges. Much of the ground at the building site was fill composed of mine tailings, which meant that the subsoil needed extensive foundation work to accommodate the heavily loaded structures of a power plant. In the end, 811 concrete piles nearly 1 meter (m) in diameter at depths varying between 25 m and 32 m were used to create stable foundations for the largest structures, such as the boiler and turbine buildings. An additional 1,264 concrete piles and 1,992 stone piles were used for other structures on the site.

Trianel received governmental approval to begin construction on May 6, 2008. Two days later, the collaboration of utilities and energy suppliers that make up the shareholders of the company decided unanimously to go forward with the project. The company selected Siemens AG to be the general contractor for the turnkey plant. IHI Corp. was chosen to manufacture the boiler with AE&E Austria GmbH & Co KG (later acquired by ANDRITZ) brought in to do the installation.

The 100-m-tall boiler support structure was a critical piece of the puzzle. After considerable deliberation, a Chinese company—Matsuo Steel Structure Co., Ltd.—was chosen to manufacture the components under the watchful eye of specialists from TÜV Rheinland and Trianel employees. Because the accuracy and quality of work was so important, Matsuo assembled the entire boiler furnace roof in Shanghai to test the dimensions and verify a precise fit prior to shipping the pieces to the plant.

Efficiency Is the Key

The plant features a Siemens SST5-6000 steam turbine, a SGen5-3000W generator, and the SPPA-T3000 instrumentation and control system. The highly efficient steam turbine is well suited for baseload operation, but its design characteristics are also a good match for highly responsive ramping—an important aspect due to the variability of renewable resources and their prevalence in Germany.

“In the coming decades, conventional power plants will play a major role in the German energy transition and will still be the backbone of security of supply. They guarantee supply during windless and sunless periods,” said Stefan Paul, managing director of Lünen.

Trianel expects Lünen to achieve an 80% capacity factor during its first full year of operation, providing electricity for about 1.5 million households, as well as supplying the city of Lünen with district heating. With an electrical efficiency of 45.95%, the plant is the cleanest and most efficient hard coal–fired power plant in Europe. Compared to an average efficiency of 36% for older plants, Lünen will emit about 1.2 million fewer tons of CO2 per year.

“The highly efficient flue gas stream’s cleaning process allows us to significantly remain below the German federal emission guide values regarding air and waste water and, thus, to minimize impact on man and environment in the plant’s catchment area,” Paul said.

The plant requires about 2 million tons of coal each year. The coal is sourced from various mining regions around the world and delivered to the port of Rotterdam by bulk carriers. From there, it is loaded onto barges (typically four per day) and delivered to the plant by Rhenus SE & Co. KG via the Datteln-Hamm Canal.

The coal is unloaded using cranes (Figure 1) at the plant-owned port and is stored dust-free in two silos with a 200,000-ton total capacity—enough to operate the plant for about 30 days at full load. Fugitive dust emissions are virtually eliminated through the use of fully enclosed conveyor systems.

The coal is conveyed from the silos to four cast bunkers that can hold 800 tons each in the steam generator building. It is then pulverized and fed into Lünen’s 70-m-tall boiler. During the design phase, the company contemplated using a relatively new alloy—T24—to construct the boiler tubes, but in the end, the more proven T23 was used. The engineers now look back with no regret, because other German plants have run into problems with T24, some even having to replace the material.

Lünen utilizes a DeNOx process between its reheater and air preheater. In the process, nitrogen oxides react with ammonia and, with the help of catalysts, are transformed into nitrogen and water vapor. The plant also has an electrostatic precipitator with 40 hoppers for particulate removal and a flue gas scrubber to reduce SO2 emissions. The resulting gypsum and fly ash are recycled for use in the building materials industry and by cement plants.

Although carbon capture and storage technology is still being developed and tested around the world, the facility was designed with room set aside so the plant can be retrofitted with such a system if it is proven to be viable on a large scale in the future.

“Despite difficulties arising from the special licensing situation for coal-fired power plants in Germany, we have managed to build a plant to the highest technical standards that by far surpasses the contractually agreed performance values for output and efficiency,” said Rainer Hauenschild, CEO of the Energy Solutions business unit at Siemens Energy.

It Takes a Village to Raise a Plant

At the height of construction in 2011, more than 1,400 workers were employed at Lünen. The plant currently employs about 90 personnel, including Trianel, STEAG management, and Microca port operations employees. In addition to the permanent plant staff, it is estimated that the facility supports another 400 jobs through its suppliers and contractual partners.

“Managing the state-of-the-art and most efficient coal-fired power plant in Europe not only inspires me as an engineer—it is also a heartfelt matter. Together with our employees and service providers, we are working to an even more flexible reaction on the volatilities of power demand and to the site’s optimal utilization. The benchmark towards our 31 shareholders is the steady technical and commercial improvement of the plant,” said Paul.

Congratulations to Trianel, Siemens, and all of the companies that completed the construction and continue to support the operation of the facility, which is a worthy recipient of a POWER Top Plant award. ■