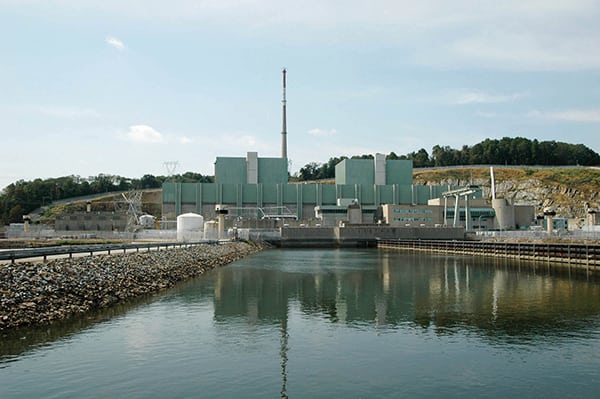 When decision-makers choose to increase the maximum output of a nuclear power plant through an uprate, it sets in motion a process that can take many years and countless man-hours to complete. The success of Peach Bottom station’s extended power uprate project shows that all the long hours and hard work can be worthwhile.

Most nuclear power plant operators probably don’t think of themselves as racecar drivers, but plant owners, like racing team owners, are often interested in getting more power out of their equipment. The process of getting approval to do so is neither simple nor easy. It can take years of planning and literally thousands of pages of justification for “racing officials,” that is, the Nuclear Regulatory Commission (NRC), to sign off on changes. However, safely increasing a unit’s capacity can mean the difference between profit and loss. 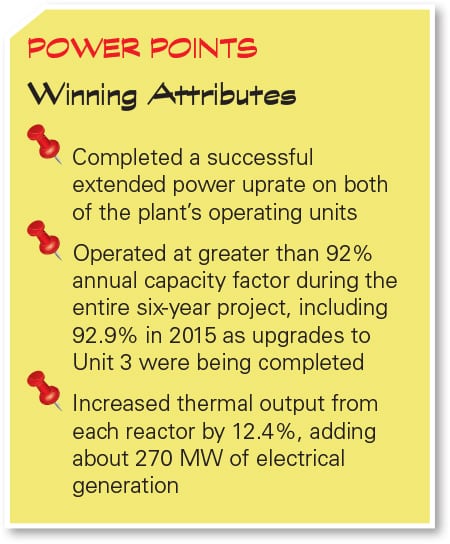 The NRC groups power uprates into three categories: stretch, measurement uncetainty recapture, and extended power uprates (EPUs). In the mid-1990s, stretch power uprates were implemented on Peach Bottom Atomic Power Station’s two operating units—Units 2 and 3. This type of uprate depends largely on the operating margins included in the original plant design. In the case of Peach Bottom, a 5% increase was approved, which boosted the thermal capacity of each unit from 3,293 MWt to 3,458 MWt.

In 2002, Peach Bottom decided to go a step further by installing Caldon Leading Edge Flow Meter CheckPlus systems to measure the feedwater flow on both units. The new instrumentation reduced calorimetric core thermal power measurement uncertainty to less than±0.38%. Because the original operating license had mandated a 2% margin, the NRC approved a measurement uncertainty recapture power uprate of 1.62%, raising reactor capacity from 3,458 MWt to 3,514 MWt.

But Peach Bottom still wasn’t done. Owners Exelon Generation and PSEG Nuclear decided to head down the EPU path in 2009. An EPU is far and away the most involved uprate, usually requiring significant modifications to major balance-of-plant equipment.

Peach Bottom’s goal was to increase thermal output from each unit by 12.4%, to 3,951 MWt. Doing so would add roughly 270 MW of electrical output, bringing the total station capacity up to about 2,600 MW. The project would require a lot of help (Table 1), but Exelon had EPU experience to draw on, having completed projects at Dresden and Quad Cities in the early 2000s. Its Clinton, Ginna, and Nine Mile Point stations had also performed EPUs.

The list of projects on Peach Bottom’s EPU schedule was extensive. It included retrofitting high- and low-pressure turbines, replacing generator rotors, upgrading isophase buses and ducts, replacing steam dryers, and much more. Engineering all of the changes, getting approval to implement the upgrades, sourcing all of the needed parts and materials, scheduling all of the tasks, carrying out the plan, and monitoring and verifying the quality of the work was a massive undertaking. In the end, it took about six years to complete the entire process for both units.

“We are fortunate to have so much experience and expertise in outage planning at Peach Bottom. We are all working toward the goal of planning and scheduling a safe, precise, and efficient outage. The Peach Bottom team is one of the best in the industry working tirelessly to make sure all of the puzzle pieces come together correctly,” said Matt Retzer, outage manager at Peach Bottom, as quoted in a booklet detailing some of the EPU accomplishments.

Not surprisingly, the critical path for the project included a lot of turbine and generator work. New high-pressure turbines were needed to accommodate the higher main steam flow rates that would result from the EPU. Cross around relief valves for the turbines were also replaced.

The generator rotor and stator were rewound (Figure 1), and rotor-monitoring capabilities were upgraded. In addition, the automatic voltage regulator, exciter, and rectifier were replaced. The goal of the changes was not only to increase component ratings but also to improve reliability.

The isophase buses, which are the conductors that carry the very large currents from the generator to the step-up transformers, required replacement so that they could safely handle the current produced when operating at the new EPU limits. To ensure adequate cooling of the bus bars, new ductwork was also installed. The current transformers, used to provide a proportional input to the generator protective relay system, were likewise upgraded to ensure accurate indication of the power being generated.

Boiling water reactors (BWRs), such as those installed at Peach Bottom, have steam dryers mounted above the fuel assemblies inside the reactor vessel. Steam generated in the reactor passes through the steam dryer to remove entrained moisture and ensure that only dry steam enters the steam lines. Some operating BWRs have experienced vibration fatigue damage in their steam dryers after steam flow was increased as part of a power uprate.

An added benefit of reduced moisture carryover is that source term spread has been reduced, that is, less radioactive contamination passes through the system to the turbines and condensers, which reduces dose rates throughout the plant. An acoustic monitoring system upgrade was also installed so that vibration and stress levels in the new steam dryers could be evaluated.

New Life for an Aging Plant

The station has been a model of excellence in recent years. Its annual capacity factor never dipped below 92% during the entire six-year period that the EPU projects were in progress, and it reached the 92.9% mark in 2015 as upgrades to Unit 3 were being completed.

“The successful completion of this project is the result of years of hard work by Peach Bottom employees and contractors,” Mike Massaro, Peach Bottom site vice president, said in a press release. “As part of EPU, almost every major component in the plant has been upgraded or replaced, which makes Peach Bottom an even safer and more efficient facility.”

The EPU “pit stop” appears to have left the plant “firing on all cylinders.” What that means is that the station is ready to “race” well into the future. On June 7, 2016, Exelon announced that it would seek a second 20-year license extension for both units. Peach Bottom’s current operating licenses don’t expire until 2033 and 2034, so if approved, the reactors could continue operating into the 2050s. ■