Today’s environmentally-friendly hydraulic fluids can cause serious problems that did not occur with previous generation fluids that contained heavy-metal additives. Electrostatic discharges and a host of other detrimental effects can occur with today’s fluids, but solutions exist to alleviate the problems.

Hydraulic fluid producers introduce additives (usually several, as an additive package) into base oils to give them the characteristics they need for the demanding conditions of hydraulic systems. Additives improve viscosity, reduce friction, prevent wear, and allow the fluid to tolerate high temperatures without oxidizing. Group I base oils contain aromatics (most of which are toxic) and zinc (heavy metal that promotes wear resistance). Because of their toxicity and potential threat to environmental systems, they no longer comply with current international environmental standards.

Hydraulic and lubrication oils in Groups II to IV (not shown in chart below) are produced with appropriate additive packages, which contain no toxins or carcinogens, are free of heavy metals, and are ashless (produce no residue as a result of combustion). However, because these oils do not contain metal, they have low electrical conductivity. When these oils flow through filters in a hydraulic system they can generate electrostatic charges. Sparking may result, which can cause explosions in the reservoir or damage hydraulic components, such as valves and filters. The sparks can also interfere with or damage electronic components, and form oil-aging deposits.

When modern zinc-free and ashless oils age, very fine (less than 1μm) solid contamination is formed that does not dissolve in the oil and is commonly referred to as varnish. This varnish settles on the oily surfaces of the components and has a detrimental effect on their function. Potential consequences include seized valve spools, overheated solenoids, and extremely short filter element service life.

When the fluid is flowing, the charge is carried downstream and creates a voltage potential. The faster the fluid flow, the higher the voltage potential. If the voltage exceeds a threshold value, a sudden equalization of voltage will occur, usually in the form of sparking. However, the fluid must have low conductivity for sparking to occur. Otherwise, the charges in the diffuse layer can flow back and be equalized, as with fluids containing heavy metal additives.

Consequences — The consequences of electrostatic discharges can be serious. For example, when the charge is carried farther downstream by the oil, uncontrolled discharges can occur in the hydraulic reservoir. Depending on the oil-air mixture in the reservoir, explosions can occur. In addition, holes may be burned into the filter media as a result of sparking.

The photo above shows a hole more than 200 μm in diameter in 3 μm filter media. The hole creates a path for contaminants to pass through the filter, severely compromising the filter’s effectiveness. Other components in the system, such as coolers and valves, can also be damaged by uncontrolled discharges.

Electrostatic discharges can also cause electromagnetic waves that disrupt and damage sensitive sensors and electronic components. In addition to hydraulic component damage, discharges can affect the hydraulic oil as well. The sparking breaks bonds within the fluid, forming free radicals that polymerize into long chains. This, in turn, leads to the formation of varnish from oil aging.

Solution — Using a custom designed test bench approved by DEKRA and SGS-TÜV SÜD, HYDAC engineers analyzed the electrostatic behavior of hydraulic filters in critical oils. The culmination of their work is HYDAC’s Stat-X filter element series, which combats the problem of electrostatic discharge. Stat-X elements not only eliminate the consequences of electrostatic charging, but the cause itself.

Why is it important to eliminate both the consequences and the cause of electrostatic charging? A discharge capable element design reduces sparking in the element, but still allows charged oil to pass through the hydraulic system. In addition, this oil is now at a higher charge potential, since sparking is not permitted to occur in the filter which would have otherwise neutralized the charge. This charged oil is carried downstream and uncontrolled discharges are possible in other parts of the system. Under certain circumstances, this can lead to serious damage, such as an explosion in the reservoir.

HYDAC has also developed a StatStick® sensor, which measures oil voltage downstream of the filter, to allow application engineers to carry out field measurements. For example, HYDAC engineers were able to uncover evidence of explosions in a reservoir of a large hydraulic system after breather filters were completely burned out. The filters were not optimized for electrostatic charging. Measurements were taken using the StatStick®, which revealed voltage peaks to 17,000 V as well as dangerous discharge sparks in the tank. Once retrofitted with Stat-X elements, no further charges were detected.

The solution proposed herein is based on the fundamental physical principles derived from the reported experimental data. Consequently, it is aimed directly at the root cause of the phenomena, thereby eliminating its root cause. Instead of attempting to channel the already existing static charge by means of conductive elements or dissipating it through the use of additives, we have shown how to arrest charge transfer leading to the formation of the Helmholtz double layer (Lang (4); Scheffler (10); Kron (41)) in the first place. Moreover, our proposed solution has been aptly verified through copious experimental laboratory and field trial data. In addition, we have demonstrated it to be finely tunable (Schmitz, et al. (42); Duchowski and Lang (43, 44)) and therefore adaptable to different oil formulations as well as to system operating conditions of varying severity, such as cold starts and flushing operations

Varnish is the product of chemical reactions occurring in oil, often called oil aging. Aging accelerates significantly in the presence of local hot spots (greater than 300° C). Electrostatic discharges are often a source of such high temperatures. Other hot spots can be caused by micro-dieseling or hot components. The result of oil aging in these cases is always the same. Hydrocarbon chains of the base oil are essentially broken down by high local temperatures. These chain sections react with other hydrocarbons, oil additives, or oxygen and eventually form varnish, which is deposited as oil sludge in the system. 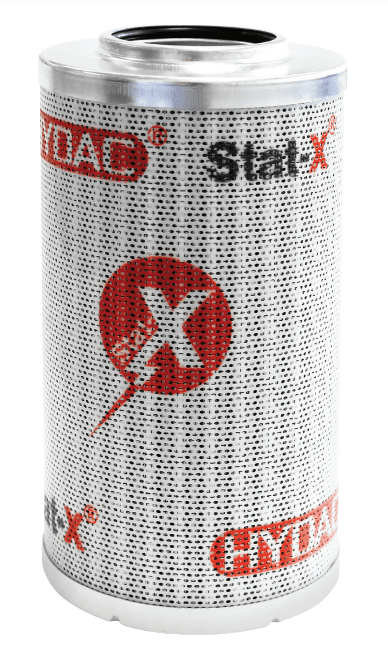 Modern oils in Groups II to IV contain numerous additives that improve the base oil’s characteristics, such as viscosity index, corrosion protection, foaming tendency, adhesion characteristics, and oil aging behavior (antioxidants). Oil aging behavior is affected mainly by two substances in the additive package: phenols and amines. These two substances act as radical scavengers and interrupt the chemical reaction that would otherwise result in varnish. In doing this, however, the radical scavengers become depleted. If they are exhausted, oil aging progresses rapidly.

STAT-X technology is based on the fundamental physical principles of electro-static charging and discharging. This advanced technology goes beyond just focusing on existing or generated static charge by means of conductive elements. It goes further to target the root cause of the phenomena, thereby eliminating it. This allows for extremely safe operating conditions in any given application, where STAT-X technology is applied.