France will shut down 14 of its 58 nuclear reactors by 2035 as well its remaining four coal power plants by 2022, French President Emmanuel Macron said November 27 in a lengthy speech that sought to clarify the country’s future energy direction.

According to the World Nuclear Association, France’s nuclear power share has steadily expanded since 1974, just after the first oil shock. However, France has pondered reducing nuclear’s share of its total generating mix from about 75% since 2012, when former President François Hollande ran on an election pledge to cut the nuclear share to 50% by 2025.

In 2014, the the lower house of France’s parliament passed the so-called “Energy Transition for Green Growth” bill, which set a nuclear cap at 63.2 GWe, which meant reducing nuclear’s share to 50% by 2025. In 2015, the Senate amended the bill to remove the 63.2-GW nuclear cap, but that same year, the National Assembly approved a new bill reinstating the cap. It also set long-term targets for France’s carbon tax, which is poised to add €5/MWh to wholesale power prices for producers that use fossil fuels. However, in 2017, France postponed its 2025 nuclear reduction target, and while it was clear the country would slash its reliance on nuclear power, no target date had been set—until Macron unveiled the long-term strategy on Tuesday.

The uncertainty has prompted turmoil, including a series of strikes at French nuclear power plants owned by state-owned power giant EDF. Over the past few weeks, mass demonstrations have also taken place across the country as part of the gilets jaunes (“yellow vests”) movement. The protests began on November 17, when hundreds of thousands of French drivers took to the streets to oppose Macron’s tax on gas and diesel for transport that will increase the price of fuel from an average $7.06 per gallon by about 30 cents. About 400 people have been injured and at least one person has died as a result of the skirmishes.

Decrying the violence on Tuesday, Macron said France’s future energy policy would be firmly rooted in its climate obligations made in Paris at COP21. “Even those who, if they do not change enough, will bear the main responsibility for adding to the economic and social debts that our children and grandchildren will have to bear, an environmental debt of a totally different kind,” he said.

Macron also noted the debate about France’s energy future has been fueled by misinformation, and he moved to install a “High Council for Climate Action,” to allow transparency in France’s future-looking policy, “which should allow to restore facts, scientific truth, elements on which, then, the debate must be fed, and opinions be confronted.”

Macron also refuted the widely held postulation that the country’s nuclear plants will be rapidly shut down to allow for an increased renewables buildout. “Nuclear power now allows us to benefit from low carbon and low cost energy. This is a reality, and this is why we will start work on a new regulation of the existing nuclear fleet—because the current system, which allows the French to have electricity prices among the most bottom of Europe, stops in 2025,” he noted.

But while France will keep its commitment to reduce nuclear’s share to 50%, the 2025 target is “a figure brandished as a political totem that was in fact unattainable,” he said. Postponing the deadline to 2035 will mean 14 reactors, each of about 900 MWe, will be permanently shuttered over the next 15 years, he said. The first two reactors at Fessenheim will be closed in the summer of 2020; four to six will be closed by 2030, and the remainder between 2030 and 2035. “The pace will vary according to the evolution of the energy mis in our own country and our European neighbors,” Macron said. 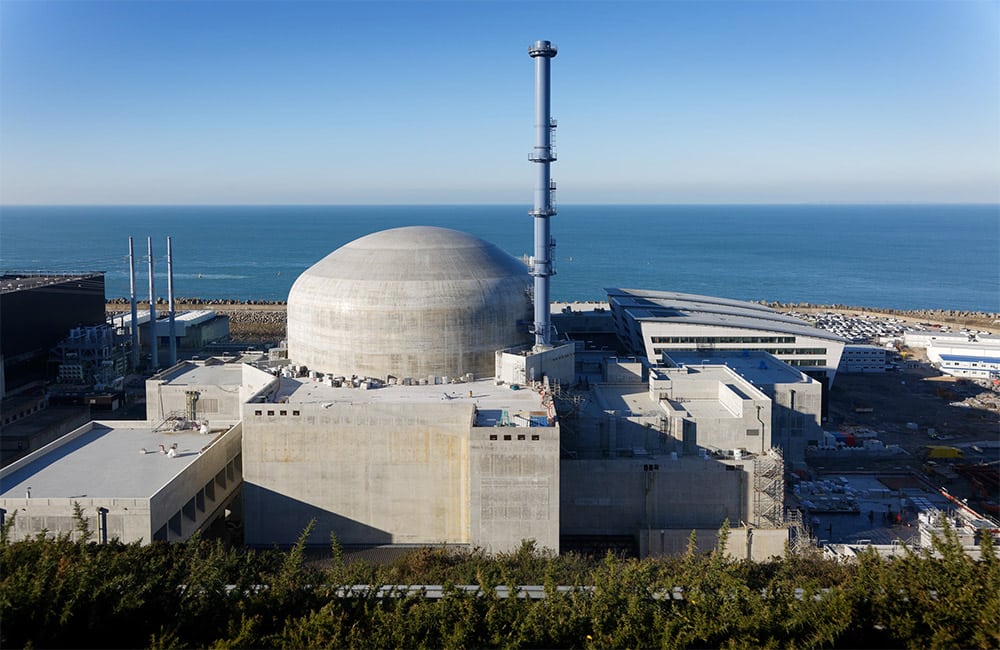 For now, when a particular plant will close remains uncertain, but this aspect will be studied by the state ministry using “reference scenarios with variations.” Macron added, however, that France will likely veer toward an “ambitious” scenario which will depend on “innovations on renewable energy storage.”

“Today it is wrong to say that nuclear power generation capacity can be replaced by renewable generation capacity; the second is intermittent,” he said. “On the other hand, if we manage to innovate fast enough, at the French and European level and have real storage technologies, we will be able to substitute much faster.”

France to Ramp Up Geothermal, Biogas, Wind and Solar Capacity

France will also close its remaining coal plants by 2022. The energy strategy also foresees a rise in geothermal power—“which has a lot of potential in many territories,” Macron said—as well as biogas production, mainly from anaerobic digestion. The diversification of gas will “continue to play an important role in our energy mix,” he said, adding it would allow for more localized energy production and offer new income prospects to French farmers.

The new energy strategy also foresees a tripling of onshore wind by 2030, and a five-fold increase of solar photovoltaic. The rollout of these ambitions will depend on how each territory can serve them.

France will also embark on expanding its offshore wind power fleet. Over the next five years, it will commission the first offshore wind farm off Saint-Nazaire, and it then plans to launch four new tenders.

The energy strategy won’t be cheap, Macron noted. “The state today devotes five billion euros a year to the development of renewables, financed entirely by the revenues of the fuel tax,” he said. “With this plan, that will increase to 7 to 8 billion euros per year,” he said.