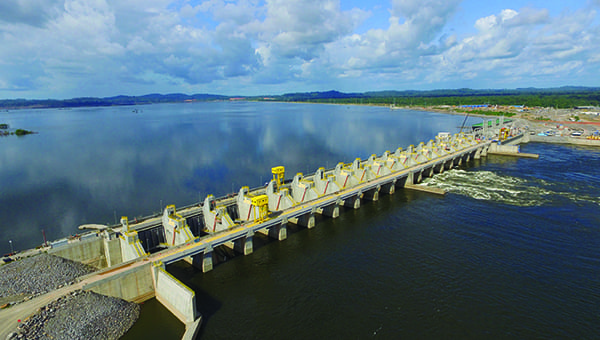 Hydropower is Brazil’s major source of electricity. The country is moving toward more generation from solar and wind, and away from so-called “mega dams,” but what could be a final mammoth hydro project shows how engineers can build large facilities with speed and efficiency while minimizing disruption to, and working with, the indigenous population.

Discussions of renewable energy often start with talk of solar and wind power. But more than 70% of the world’s renewable energy comes from hydropower, according to the World Energy Council, and it has advantages over its renewable brethren, with the ability to supply baseload generation and meet unexpected demand spikes through pumped-storage technology.

Estimates of installed global hydropower generation capacity have reached almost 1,300 GW this year, according to several energy agencies, and that level is expected to grow another 4.5% by 2021. Topping 1.3 TW would mean hydropower capacity worldwide would have grown about 40% from 2010 to 2020.

Brazil is the world’s second-largest producer of hydropower, behind China, and is continuing to increase its generation capacity with Belo Monte, a multibillion-dollar, 11.2-GW project coming online in stages on the Xingu River in the state of Para. But political turmoil in Brazil, and a government move away from hydropower toward more wind and solar generation, means Belo Monte may well be the last of the so-called “mega-dam” projects built in the country, due to concerns about deforestation and the loss of the Amazon rainforest. 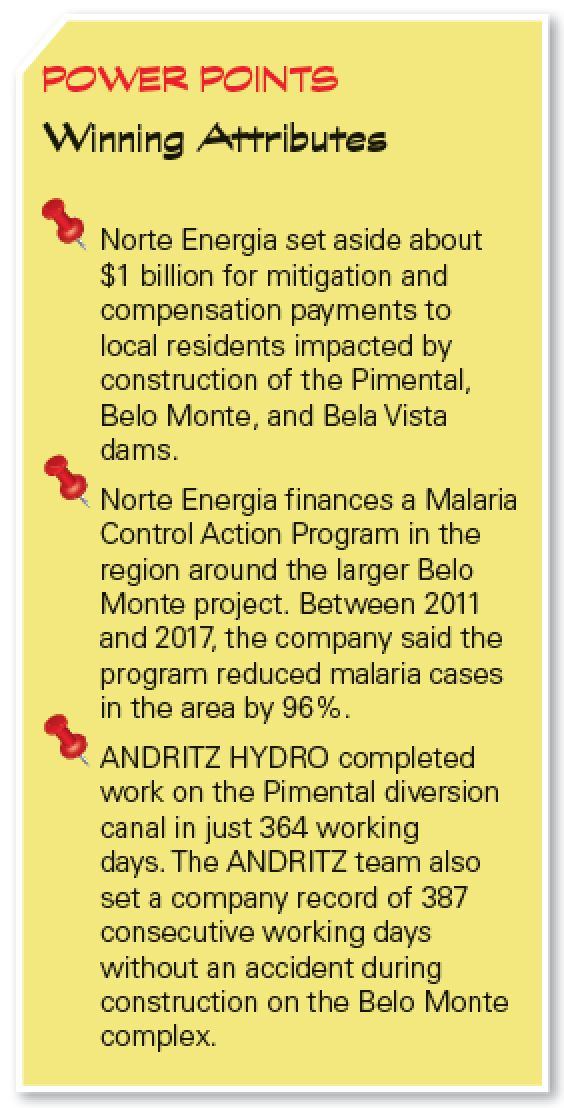 The Belo Monte complex includes the Belo Monte, Bela Vista, and Pimental dams, with major equipment supplied by ANDRITZ HYDRO, the Austrian engineering company famed for its hydro projects. Belo Monte is owned and operated by a consortium led by Brazil’s Norte Energia.

Pimental, with a 233-MW powerhouse whose sixth and final unit began operating in January 2017, is an integral part of the project. Pimental is the largest of the three dams, located about 60 kilometers upstream of Belo Monte. Its diversion canal, designed specifically to avoid the flooding of indigenous peoples’ lands, diverts part of the Xingu River into a reservoir from which Belo Monte draws its water. Bela Vista, the final dam, acts as the reservoir’s spillway.

Pimental’s construction involved changes in design to minimize impacts to the local population while ensuring its contracted power generation. It has overcome years of negative rhetoric, including protests designed to disrupt construction. As the project moves into its final stages, the completion of Pimental provides a model for speed and efficiency of building a successful hydropower project, one constructed against a backdrop of government turmoil as Brazil seeks to balance increasing its power generation from renewable resources with the financial and societal impacts of such projects.

As Luciano Di Domenico, ANDRITZ HYDRO’s project manager for Belo Monte project, and Cristiano Del Nero, marketing and business development director for the company, wrote about Pimental: Its construction “involved an impressive 8,500 tons of equipment and river diversion was completed in only 364 working days. The dedication, hard work and commitment of the ANDRITZ HYDRO team was reflected in a record 387 consecutive days without any accidents.

“After the power plant was officially handed over to the customer and put into commercial operation, ANDRITZ HYDRO executed the final milestone of the plant’s development—the dismantling of the lodges, the construction site and the administrative building. All equipment and furniture was given to neighboring schools and charity institutions.”

It marks a change championed by the International Hydropower Association (IHA), which publishes sustainability guidelines for hydropower projects, including project designs and operations that “address the needs of the wider financial community, policy-makers and local communities.”

A River of Change

François Le Scornet, founder and CEO of Carbonexit Consulting in France and a former marketing and product manager with GE Renewable Energy, told POWER via email that “Hydropower [has] several advantages,” when it comes to power generation. “This is a low-carbon renewable energy solution. It’s a very reliable and robust technology with decades of experience. It is quite flexible to support the production-demand balance.”

“This is a very mature technology, with well-known providers for all types of equipment,” Le Scornet said. “The LCOE [levelized cost of electricity] for hydro is of course project/country dependent but is usually pretty good when hydro potential is there.”

But the future for Brazilian hydropower is murky. Much of the hydropower generation in Brazil is publicly owned, and some plants have struggled financially in recent years. Political issues have had an impact on the country’s energy industry. Dilma Rousseff, who served as president from 2011 to 2016 before her impeachment amid a multibillion-dollar corruption scandal, pushed policies to increase the country’s use of renewable energy. Large, state-owned companies, however, balked at Rousseff’s reform measures, saying they could not be profitable.

The IHA’s recent 2018 Hydropower Status Report notes the changing landscape for Brazil, noting that “Brazil, despite adding 3.38 GW [of hydropower] in 2017, has removed several large hydropower projects from its 10-year pipeline in favour of pursuing more decentralised renewable energy.”

Michel Temer, who served as Rousseff’s vice president and took over as president in mid-2016, has overseen a modest economic recovery in a country battered by a recession in 2015–2016. Temer has said Brazil—one of the first countries to sign the Paris agreement on climate change—must continue to recognize the importance of renewable energy, certainly hydro and also wind and solar.

Temer’s government has backed regulation to modernize and liberalize the country’s energy market in an effort to attract private investment, including the privatization of Electrobras, the government-owned company responsible for the development of many of the country’s large hydropower projects, including Belo Monte. Reports say 70% of Brazilians oppose that move, which likely will be decided after the election of a new president in October.

A New Way of Thinking

The engineering of the Belo Monte project and particularly the complementary Pimental powerhouse represented a change in thinking for the Brazilian government. The dams use “run-of-river” designs that rely on the water’s natural flow to power turbines, moving away from building large reservoirs that would flood neighboring land. A diversion canal was constructed at Pimental to channel part of the river’s flow to the main powerhouse, a project—as ANDRITZ noted—completed in just 364 working days.

“The final unit went into operation in the first week of January 2017. Delivery of the final environmental report in April concluded the company’s contractual requirements to the customer, Norte Energia. In June 2017, the Turbine Performance Test was carried out, surpassing the contractual specifications.”

Le Scornet talked about dealing with environmental issues, which are often at the forefront of design and permitting challenges for hydropower projects.

“The impact [of a hydro project] can be particularly strong, depending on the topography and the size of the generation unit. The aquatic ecosystem can be strongly impacted by dams,” he said. “The [IHA’s] Hydropower Sustainability Assessment Protocol offers a framework for assessing hydropower projects against a comprehensive range of social, environmental, technical and economic criteria. It should be used to provide evidence to create a sustainable project.”

Norte Energia said 478 square km were flooded by two reservoirs, mainly at the diversion canal, in an area already largely deforested by the building of the Transamazon Highway in the 1970s. At the time that road was built, the country’s military government discussed plans to build at least five dams with large reservoirs on the Xingu River, generating 20 GW of power but also flooding 18,000 square km of land and displacing tens of thousands of people. The Belo Monte project has a much smaller impact, in part due to the diversion canal at Pimental, which Norte Energia said added about 2 billion reais ($536.7 million) to the project’s cost.

Norte Energia has noted the importance of the project’s design, saying on its website: “In order to reduce the environmental impact, the main reservoir of the project, formed in the Xingu river channel, was conceived in the wake of water, a modern technology and preservationist that meets the most rigid principles of sustainability, respecting the environment and the communities.”