A bill that would halt the Clean Power Plan’s compliance deadlines until litigation on the rule has been completed has passed the U.S. House of Representatives with a 247–180 vote.

The Ratepayer Protection Act (H.R. 2042) now goes to the Senate, where the GOP is working on a similar measure to suspend the Environmental Protection Agency’s (EPA’s) proposed rule, which would apply to existing U.S. power plants.

More than 200 organizations have expressed support for the bipartisan bill, which received eight votes from House Democrats. Four Republicans voted against the bill’s passage.

The Obama administration on Tuesday, meanwhile, pledged a veto if both chambers of Congress pass it, saying H.R. 2042 would undermine the public health protections of the Clean Air Act and “threaten to slow or stop U.S. progress in cutting dangerous carbon pollution from power plants.”

The bill would extend the rule’s compliance dates pending judicial review, including the submission deadlines for state plans. Significantly, it also includes a safe harbor for states to protect ratepayers, providing that no state will be required to implement the plan if the state’s governor or other officials determines adverse effects on ratepayers or on the state’s electricity system.

The EPA will finalize the rule this summer. But critics have already raised several concerns about its legality, how it will be implemented, its impacts of electric reliability, and its potential costs.

A document circulated with the bill from the Institute for 21st Century Energy , which aggregates concerns expressed by U.S. states about the Clean Power Plan, claims that 28 state governors or attorneys general have raised major concerns with the rule’s legal foundations. A dozen states are suing the EPA regarding its authority to promulgate carbon rules. 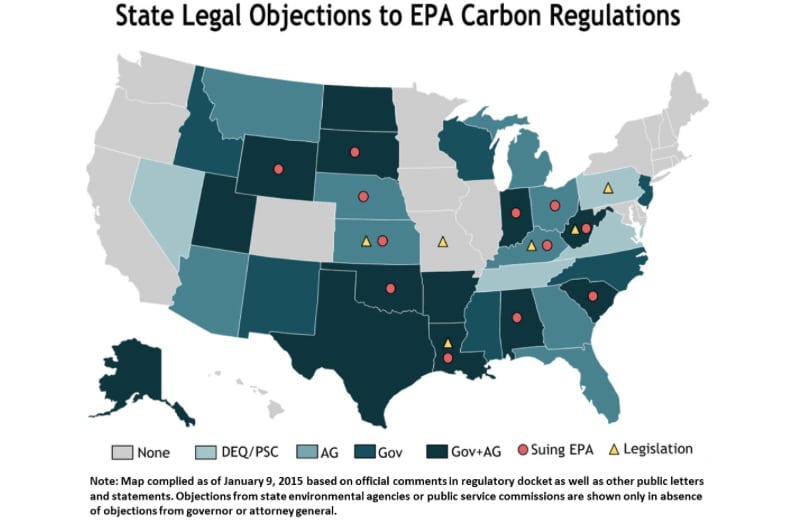