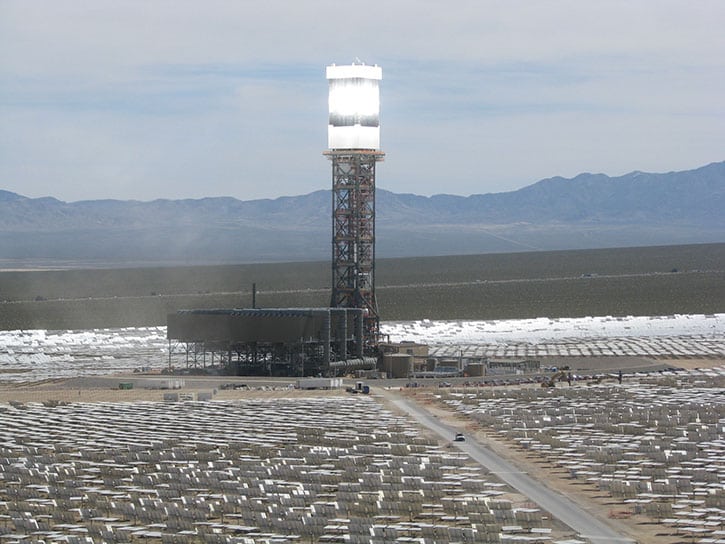 The Ivanpah Solar Electric Generating System (ISEGS) reached a notable milestone on Tuesday, Sep. 24, 2013, when its Unit 1 turbine generator was synchronized to the California power grid for the first time.

The project has been under construction since Bechtel Corp. began site preparation on Oct. 8, 2010. Jointly owned by NRG Energy Inc., BrightSource Energy Inc., and Google, the three-unit power system is being built on 3,500 acres of public desert land northwest of Nipton, Calif., in Ivanpah Dry Lake.

Unlike photovoltaic solar conversion, which changes sunlight directly into electricity, ISEGS utilizes a thermal process. Mirrors are used to reflect sunlight to boilers that sit atop 459-foot-tall towers. The concentrated solar energy heats water to produce steam, which is used in steam turbines to generate electricity. The steam exhausts to an air-cooled condenser, with the resulting condensate used as feedwater for the boiler.

There are 173,500 heliostats installed with two mirrors on each. The heliostats track the sun in two dimensions to reflect sunlight to the boilers. Water inside the boilers is heated to 1,005F, which produces an operating steam pressure of 2,400 psig. When fully operational, ISEGS will generate 377 MW (net) from the three units.

The total price tag for the project was $2.2 billion, and the entire project is expected to reach substantial completion by the end of 2013. The project received $1.37 billion in Department of Energy provisional loan guarantees in 2010; the following year $1.6 billion in loan guarantees were finalized.