The Edison Electric Institute (EEI), the trade group representing investor-owned utilities, has come under fire for a new communications plan that was intended to depict utilities as more community-minded.

The plan, developed by a “crisis communications expert,” Michael Maslansky, was to be released this month to member utilities. Details of the plan were presented during a January EEI board meeting; an audio recording and transcript of the meeting from someone who was present was provided to The Huffington Post (HuffPo).

The HuffPo story quotes Brian Wolff, EEI’s executive vice president for public policy and external affairs, as saying, “What we are seeing is generally a lot of negative attacks on our industry” . . . “designed to harm our industry” and “create more distance between our companies and customers.”

The plan devised by Maslansky apparently includes a collection of new talking points, as reported by HuffPo:

“Think of this as a style guide going forward,” Wolff said. “We don’t want to call this a campaign. I view this as something that we need to do year in, year out … We need to be able to think about something sustained, something repetitious, something ongoing.”

Maslansky conducted in-depth interviews and spoke with focus groups about the language the industry should use, Wolff said. The research found that many people had no strong opinions about utilities one way or another. But there were also people who held negative views, he said. “They view us [as] a monopoly, no incentives to serve the customers. They view us as stuck in the past in terms of technology.”

The renaming of utility-scale or utility-owned solar has attracted the most attention because “community solar” has an already-established, specific meaning, as POWER reported in “Solar Gardens: A Fast-Growing Approach to Photovoltaic Power” in our May 2015 issue.

As commonly understood, community solar is a solar photovoltaic (PV) project that is often developed by a third party (though sometimes a utility) that enables individual customers—whether residential, commercial, or industrial—to buy shares in the project. The PV installation is developed on an appropriate site and enables customers who would not otherwise be able to install or own PV (because they are renters or do not have an appropriate roof, for example) to participate in supporting renewable generation and, where available, participate in net metering programs. 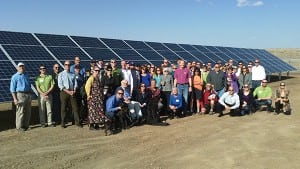 The concept of community solar originated in 2003 in an actual community—Ellensburg, Washington. Some in the solar energy community have objected to the EEI appropriating the term “community solar” to replace “utility-scale.” Greentech Media quoted Bryan Miller, senior vice president of public policy and power markets at Sunrun and president of The Alliance for Solar Choice, as saying, “You can’t just rename the DMV and suddenly make people like it.”

Community solar (also sometimes called “shared solar”) has become part of the battleground between distributed renewable advocates and utilities in some parts of the U.S., which makes the proposed adoption of this term by utilities a hot button issue.

It’s not that actual shared, community solar projects and utilities need be in conflict. Rocky Mountain Institute recently wrote that, “Combining solar companies’ strengths with utilities could create an environment that can yield additional value.”

HuffPo reported that Wolff said at the January meeting, “ ‘Community solar’ really resonated with customers… They really wanted something that defined what it meant to be community.”

“‘Utility-scale solar,’ owned by the utility, sounds like the utilities are going to be in complete control,” he continued. “We say, ‘Community solar for all.’ Again, there is a way to get around this without trying to get too complicated here. They like the word ‘community solar.’ It conveys the benefits of what we are talking about here.

Bryan Miller was quoted in the HuffPo article as calling “the co-option of community solar ‘dishonest politics,’ given the fight utilities have waged against rooftop solar in some states.”

“Instead of renaming their actions, they should change their actions,” said Miller. “Then they wouldn’t have to worry about how to spin them.”

[Update] In an email response to POWER’s request for comment, received after initial posting, Jeff Ostermayer, EEI manager of media relations, said, “Our industry is working to deliver an energy future that is smarter, cleaner and stronger. We want to ensure that customers understand the investments we are making and the work we are doing to benefit them. That means communicating in language that is customer-friendly.”