Tippi Hedren learned the hard way—in Alfred Hitchcock’s 1963 classic, "The Birds"—the damage that a flock of angry seagulls can do. But what do you do when 6,000 starlings suddenly invade your power plant? Hide the birdseed and run for cover! Like any conscientious company, PacifiCorp works hard at keeping its premises in tip-top shape and its atmosphere healthy for workers and visitors.

"Last fall," relates Dave Sheetz, a mechanic at PacifiCorp’s Dave Johnston Power Plant in Wyoming, "thousands of starlings began roosting all over our power generating units. Their droppings covered the units and dripped down the sides from top to bottom." To make matters worse, Sheetz adds, the starlings were fond of nearby Russian olive trees, so hundreds of olive pits littered the place as well.

Sheetz, a 25-year veteran of PacifiCorp, considered the messy and noisy visitors a serious issue. So did Richard Bates, a 30-year veteran and longtime supervisor of operations at Dave Johnston. "The starlings blackened the sky when they came in flocks of a thousand or more," Bates says. "They’d roost on our electrostatic precipitator, on four steam generators from 150 feet to 210 feet tall, and on other tall structures as well."

"We tried using noise as a deterrent," Sheetz says. "The birds would leave temporarily, but they always returned."

Bates consulted the company’s environmental engineer and began hunting on the Internet for ways to deal with the avian invasion. "I was most concerned about the health issues related to the bird droppings," he recalls. "Fungus grows in moist conditions, and airborne particles can cause infection." Bates knew that the situation would be unacceptable to PacifiCorp’s management at every level.

Many surfing expeditions led Bates to Chicago-based Bird-X Inc., a manufacturer and distributor of an array of bird deterrence products and systems. "I spoke with a Bird-X consultant, who recommended the BroadBand PRO unit," he says. The unit was sensibly priced, so he bought four of them using his "small tools" fund, Bates recalls.

The BroadBand PRO (Figure 6) repels pest birds by making them think they’re in danger. According to Bird-X, BroadBand PRO is the first electronic device to combine varying species and volumes of high-intensity bird sounds in a multitasking mode. What that means is that the device broadcasts two kinds of distress cries. One cry is what birds like starlings, pigeons, and gulls use to alert members of the flock that something isn’t right in birdland. The other, which combines the cries of predators such as falcons and hawks, adds the dimension of extreme threat to the broadcast, further unsettling the pest birds and prompting them to fly away. 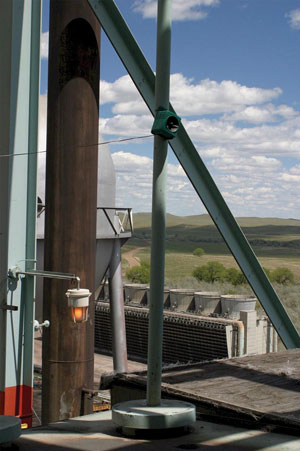 6. Silence is golden. The Bird-X BroadBand PRO unit broadcasts same-species and predator bird calls at various timings, frequencies, and volumes. A power plant in Wyoming can attest to its effectiveness. Courtesy: Bird-X Inc.

Outfitted with four portable speakers, a single BroadBand Pro unit produces a pest defense that covers up to 10,000 square feet. The unit is programmable to generate cries with random timing, volume, and frequency. The right combination for a particular species is reached by trial and error.

Bird-X emphasizes that the Broadband Pro does its job without harming the birds or the environment. That’s important to PacifiCorp, says Jeff Hymas, a company communications specialist, because "our corporate mission includes being a responsible environmental steward and wildlife preservationist."

Surprisingly, the BroadBand unit seems to work equally well in closed areas and in wide-open spaces such as rooftops, parking lots, towers, power stations and stadiums—virtually anywhere that birds congregate. Driving away unwanted birds with sound is remarkably effective.

When the boxes bearing four BroadBand PRO units arrived from Bird-X, Sheetz went to work placing them at critical sites. "The first thing I did was install two units on top of Units 1 and 2," he explains. Because Unit 4 is taller than the others, Sheetz placed another BroadBand PRO about three-quarters of the way up the structure. Bates advised Sheetz to put the fourth unit under the floor of the precipitator, which is 75 ft high and elevated 20 ft above ground. Why below and not above the precipitator? "Starlings were nesting underneath it," Bates explains.

Gone to the birds

When Sheetz turned on the unit he had installed atop Unit 1, it wasn’t only the starlings who bolted. "I got a little startled myself," Sheetz confesses. "It was loud, even at a low setting."

But it did the trick. "The whole flock flew away," Sheetz says, adding, "I assumed they might come back." And some did. So Sheetz adjusted the settings for frequency and volume on the BroadBand unit and, more importantly, he repositioned the speakers to cover a larger area.

Bates explains that the birds were also roosting in Unit 1’s scrubber section, possibly because the warm exhaust gases there created a cozy nesting spot. By re-aiming the speakers at the scrubber, Sheetz bounced the birds back outside. Bates was pleased with the result. "The starlings are now roosting in trees near the river, out of harm’s way," he says. And they have yet to return.

But Sheetz isn’t quite as satisfied. "We need at least two more BroadBand PRO units to protect the transformers and switchgear in our substation," he says. The substation is naturally attractive to birds because it contains wires, beams, and transformers—all perfect perching spots. According to Bates, "The birds are thickly packed along the power lines from one end to the other—wing to wing."