South Korea, the world’s fourth-largest producer of nuclear power, in June warned of “unprecedented” power shortages this summer after it shut down two reactors due to faulty safety equipment and delayed the start of operations of another last month.

Components used in South Korea’s 23 reactors, which provide about 35% of its power needs, require quality and safety warranties from one of 12 international organizations recognized by the country’s government. The Yeonggwang incident prompted South Korea’s Nuclear Safety and Security Commission (NSSC) to expand its investigation into forged safety certificates and reactor components for all 23 of the nation’s reactors, as well as five others under construction. 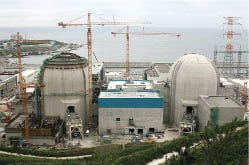 2. Sidestepping safety rules. The South Korean
government warned of unprecedented power
shortages this May after it was forced to halt
operation of two 2012-completed nuclear reactors
—putting more than half its nuclear fleet offline.
Shin-Kori No. 2 (shown here) and Shin-Wolsong
No. 1. are expected to resume operations within at
least four months, after replacing safety-related
control cabling with forged documentation.
Courtesy: KHNP

Then in May, KHNP found safety-related control cabling with forged documentation in four other reactors, prompting the NSSC to force shutdown of Shin-Kori No. 2 (Figure 2) and Shin-Wolsong No. 1 reactors—both commissioned in July 2012—for about four months for replacements. It also ordered replacement cables at the 2010-commissioned Shin-Kori No. 1, which is shut for regular maintenance, and at the new Shin-Wolsong No. 2 plant, which is readying to be commissioned in Gyeongju-si. Concerns about the power shortages forced the government to allow the Hanbit No. 3 reactor on the country’s West Coast to return to service this June; it had been shuttered for nearly eight months on forged safety equipment documentation concerns. South Korea is at this writing in July operating 14 of its 23 reactors.