Construction of the massive $6.2 billion project—including its 912-foot-tall double-curvature arch dam and a reservoir with a capacity of 12.67 billion cubic meters—began in 2005. The dam will generate power from two underground power stations, each equipped with nine turbines, located on the right and left banks of the river. All 18 generating units are scheduled to be completed by 2014, when the project will rank as the third-largest power plant in the world, after the Three Gorges and Brazilian Itaipu complexes.

And in the last week of July, four Alstom-manufactured 800-MW class Francis turbines, each coupled with an 889 MVA generator (Figure 3), began commercial operation at China’s Xiangjiaba underground hydro power plant, which is also located on the Jinsha River, a Yangtze River tributary, in Yunnan and Sichuan provinces. According to Alstom, the 800-class units made for plant owner CTG are “the most powerful hydroelectric generating units in the world.” To start with, the generators are “the only air-cooled generators in the world with 23kV windings,” the French firm says. “This high voltage allows an optimized electrical design for such a high power output.” At almost 10 meters in diameter, the turbine runners weigh more than 400 metric tons.

When all eight units are operational, the 6.4-GW facility will become an integral power source in the country’s West to East Electricity Transfer Project, which is designed to power energy-shortage-stricken urban and industrial centers on the east coast. The South-North Water Transfer Project, which seeks to transfer 35 billion cubic meters of water every year from China’s wet south to its arid north, and the West to East Project are China’s two biggest infrastructure developments under way. Initiated during the 10th Five-Year Plan (2000 to 2005), the West to East Electricity Transfer Project’s first phase continues to expand the western province’s generating capacity—mostly through construction of new coal units and hydropower plants—as well as through the construction of three transmission corridors that connect newly built capacity in the north, central, and south to the eastern coast (Figure 4). 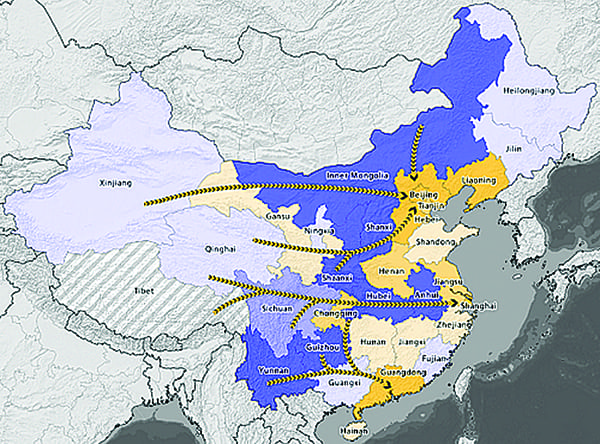 4. To have and have not. China’s West to East Electricity Transfer Project seeks to expand generating capacity in western provinces and then transfer it through three transmission corridors to seven energy-shortage-stricken provinces—Beijing, Tianjin, Hebei, Shanghai, Zhejiang, Jiangsu, and Guangdong—on the eastern coast, which consume nearly 40% of the nation’s electricity. Each corridor is expected to exceed 40 GW by 2020. The blue provinces represent net electricity exporters; the darker blue provinces export 30% or more of their power. The orange provinces represent importers, with lighter orange indicating imports of less than 10% of their power. Courtesy: Wilson Center

The Three Gorges Dam, the world’s biggest power project, which is located on the middle reaches of the Yangtze River and is slated to be fully completed by 2015, will also play a central role in the West-East project.

The Xiangjiaba dam will be connected to Chinese industrial and commercial hub Shanghai about 2,000 kilometers away by the ABB-designed 800-kV Xiangjiaba-Shanghai line, which became the world’s first ultra-high-voltage direct current transmission line when it was completed in July 2010.