The Federal Energy Regulatory Commission’s regular monthly meeting on December 18 will feature an unusual agenda item: a detailed look at winter coal deliveries to power plants. FERC said in a press release that it will “convene a panel discussion” on coal transportation problems, with witnesses from it staff, the Department of Transportation’s Surface Transportation Board (STB), electric utility Minnesota Power, BNSF Railway, and the Midcontinent Independent System Operator. 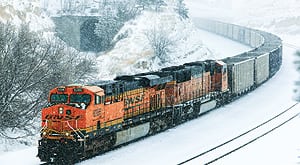 The FERC announcement said, “Officials in the Midwest have raised concerns about railroad congestion affecting coal stockpiles and operation of the electric power sector in Minnesota and other areas. FERC has been monitoring this issue, and in recent months commission staff have been in communication with staff at the Surface Transportation Board (STB) as well as affected utilities on this subject.”

Last winter’s rolling deep freezes, coupled with increased demand for transportation of Bakken crude oil from the upper Midwest and large harvests of corn and soybeans, bumped coal from the trains and produced massive drawdowns of power plant coal piles along with the prospects of plant outages. FERC is concerned that the conditions could repeat this winter. The Minneapolis StarTribune reported last month, “Electric utilities that serve Minnesota say they still aren’t getting enough coal. Two power companies that serve northern and western parts of the state have halted or reduced power generation at five coal-burning units. Almost all utilities are entering the winter with below-normal coal stockpiles that some executives say put the reliability of the electrical grid at risk.”

FERC Commissioner Tony Clark, a former North Dakota regulator, has been particularly troubled by rail bottlenecks in the region. He has argued for greater development of crude oil pipelines to move oil from the region to Gulf Coast refineries, both because pipeline shipments are less threatening to the environment and to free up rail capacity from Wyoming’s Powder River Basin to power plants in the Midwest.

The Midwest Coal Traffic League last month filed a petition with the STB calling on the regulators to push BNSF, one of the two main carriers out of the Powder River Basin, to accelerate coal deliveries or face fines. The St. Louis Post-Dispatch reported, “A record harvest, general economic growth and increases in oil shipments from the country’s booming oil fracking industry in North Dakota and elsewhere have all strained the rail network.”

Utilities are claiming that coal inventories at generation plants are at “dire” levels, particularly in the upper Midwest. “It’s a crisis,” said Will Coffman of the American Public Power Association, which represents municipal-owned power companies, including many in Minnesota. “Our members don’t have an alternative delivery source. They are captive to the railroad, and the railroad knows it.”

The major trade groups representing the electric utility industry, including the APPA, the Edison Electric Institute, and the Rural Electric Cooperative Association, along with the National Association of Regulatory Utility Commissioners, have supported the coal transport lobby’s petition. They wrote that they believe the coal transportation problem “has already reached dangerous levels” and is on the verge of becoming “dire,” and “posing a threat to the reliable operation of the power grid this winter.”

BSNF says it is working with the STB to improve service, but that a coal-specific policy could lead other commodity shippers to request special treatment, which would be “unnecessary, inappropriate, and counterproductive.”