The U.S. Chemical Safety Board (CSB), in a November 2006 report, detailed the occurrence of nearly 280 dust fires and explosions in U.S. industrial facilities over the prior 25 years that resulted in approximately 119 deaths and more than 700 injuries. Preparation of the report was motivated by three catastrophic dust explosions in 2003 that killed 14 workers. The CSB subsequently released its "Investigation Report: Combustible Dust Hazard Study" in November 2006; it recommended specific regulatory action by the federal Occupational Safety and Health Administration (OSHA) and a change in industry standards, such as the comprehensive standards maintained by the National Fire Protection Association (NFPA).

The CSB report found that the three explosions that occurred in 2003 would have been avoided had the facilities complied with relevant sections of the NFPA standards. The CSB also found that although the NFPA standards are usually incorporated by reference into state and local fire codes, only a few local fire code officials inspected industrial facilities, that those inspections were rare, and that those officials are "often unfamiliar with combustible dust hazards."

A report by OHSA, "Combustible Dust in Industry: Preventing and Mitigating the Effects of Fire and Explosions," describes the cause of a number of industrial dust explosions and useful mitigating actions facilities can employ to reduce the potential for a dust explosion.

According to OSHA, "its Combustible Dust National Emphasis Program (NEP) [was begun] on October 18, 2007, to inspect facilities that generate or handle combustible dusts that pose a deflagration/explosion or other fire hazard." Unfortunately, only a year later, another massive sugar dust explosion in Georgia killed 14 workers and injured many more. That February 2008 explosion invigorated OSHA’s Combustible Dust National Emphasis Program. Those 64 industries with a history of dust incidents became the target of increased OSHA inspection visits and, therefore, an increased number of citations were issued.

Beyond the OSHA General Duty Clause Section 5(a)(1) that states an employer is to "furnish to each of his employees employment and a place of employment which are free from recognized hazards that are causing or are likely to cause death or serious physical harm to his employees," a number of other standards and regulations apply.

There are no specific OSHA regulations for handling coal dust for the power generation industry, but a Technical Information Bulletin (TIB 01-11-06), "Potential for Natural Gas and Coal Dust Explosions in Electric Power Generating Facilities," was written "to remind employers who operate electrical power generation facilities about potential explosion hazards."

OSHA issued a directive in February 2008 on the enforcement policy and inspection procedures for "Control of Hazardous Energy (Lockout/Tagout)" and "other related standards." In March 2008, the National Emphasis Program (NEP) for Combustible Dust was reissued.

OSHA data seems to indicate very little enforcement activity for fugitive dust in the power industry, as defined by Industry Group 491: Electric Services. The data in the table were extracted from OSHA’s Integrated Management Information System (IMIS), which  is available online on the OSHA website to illustrate the number of inspections by OSHA in the power industry. 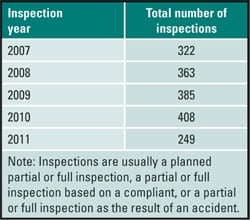 According to the OSHA IMIS, 111 citations were issued to utilities in Industry Group 491 during the period October 2010 through September 2011 (the latest 12-month data available) during only 41 inspections. The total penalties for violations were $593,846. This report lists the cause of the various citations, with what appears to be a small number possibly related to combustible dust.

A related search under the General Duty citation database in IMIS (where OSHA typically writes citations for dust-related violations) found only three citations issued for "Dust & Fumes" issued since January 2007: Two went to a single utility during a visit in 2009 and one in 2010 during another utility visit. The data seems to indicate that there has been little increase in enforcement activity related to coal dust after the NEP for explosion dust began almost four years ago.

Dust Enforcement Up in Other Industries

Nationwide, under all 64 industry SIC codes, the inspection and citation results are quite different. The following paragraphs on the results of the NEP were provided by OSHA and were edited for inclusion in this article.

OSHA has found more than 4,900 violations (3,786 violations of federal standards and 1,140 of state standards) at the facilities inspected pursuant to the Combustible Dust NEP. This includes not only combustible dust-related violations but also violations such as lockout/tagout, walking and working surfaces, and other hazards, through 2009 [the latest data available]. OSHA judges 74% of those violations under federal jurisdiction as "serious," but only 34% of the violations of State Plan inspections are similarly categorized. 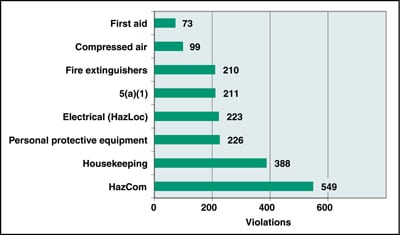 The average number of violations per NEP inspection is 6.5 in federal enforcement. The total citation penalty amount OSHA has proposed through 2009 (the latest data available) under the Combustible Dust NEP is $14,848,686. However, OSHA proposed the third-largest fine in its history, exceeding $8.7 million, following the Imperial Sugar Refinery explosion in February 2008. The average penalty proposed per serious violation during combustible dust NEP inspections is $1,233 for federal OSHA and $791 for state plans.

Employers were also cited for violations of personal protective equipment, electrical equipment for hazardous (classified) locations, first aid, powered industrial trucks, and fire extinguisher standards during these inspections. OSHA compliance officers even found that compressed air in excess of 30 psi was being used for cleaning purposes. As well as violating an OSHA standard, the use of compressed air to clean accumulated dust would create a dust cloud and can result in deflagration or explosion if ignition sources are present. OSHA issued General Duty Clause citations for this practice.

In the absence of an OSHA standard, OSHA can cite Section 5(a)(1) of the OSH Act, the General Duty Clause, for serious hazards, such as fire and explosion hazards for which there are feasible means of abatement. OSHA has referenced NFPA standards 654, 484, 61, and 664 as potential means of abating combustible dust hazards in citations issued under the NEP. OSHA also referenced NFPA 499 in recommending safe practices for electrical equipment used in Class II locations and NFPA 68 and 69 for explosion prevention and protection techniques. Some of the hazards cited under the General Duty Clause are listed in the next section.

The following list summarizes some of the General Duty Clause citations issued by OSHA under the Combustible Dust NEP. These citations provide excellent "lessons learned" for coal-fired plants, and the problems identified should be addressed when auditing existing coal dust safety programs: