In early June, as U.S. Energy Secretary Steven Chu confirmed to a House Subcommittee that Yucca Mountain repository was, without doubt, "off the table" and that a blue ribbon panel would further advise the government on what it should do with its high-level nuclear waste, Sweden announced the site of what could be the world’s first permanent spent fuel repository.

The Swedish Nuclear Fuel and Waste Management Co. (SKB) — an independent company owned by nuclear plant operators — selected Forsmark in the municipality of Östhammar as the site where nuclear waste from Sweden’s 10 nuclear plants will be permanently stored. The selection of the site culminates almost 20 years of work during which SKB conducted surveys throughout Sweden and feasibility studies in eight municipalities.

The repository relies on three protective barriers to keep radioactive substances from spreading into the environment. The spent nuclear fuel is first encapsulated in copper canisters that are nearly 5 meters (m) long and over 1 m in diameter. The outer casing is a 5-cm-thick layer of copper to protect against corrosion, and inside is a nodular cast iron insert for strength. When filled with the spent fuel, these are expected to weigh between 25 metric tons and 27 metric tons. The copper canister will then be placed in crystalline basement rock at a depth of about 500 m, embedded in bentonite clay (Figure 2). When all the spent nuclear fuel has been deposited in the crystalline basement, the tunnels and shafts will be filled in with swelling clay or a mixture of crushed rock and clay. The system will also rely on the Clab facility in Oskarshamn for interim storage of nuclear waste. The fuel will lie there in large cooling water basins for 30 to 40 years. 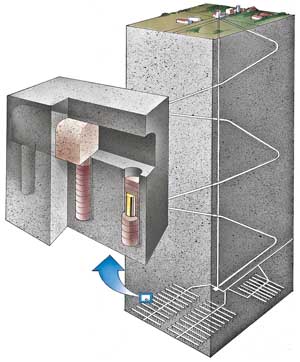 2.     Spent and buried in Sweden. Sweden may house the world’s first permanent nuclear waste repository if regulators approve the Forsmark site selected in early June by the Swedish Nuclear Fuel and Waste Management Co. Final disposal of the spent nuclear fuel will entail using three protective barriers. The spent fuel will first be encapsulated in copper. The impermeable copper canisters will then be placed in crystalline basement rock at a depth of about 500 meters, embedded in bentonite clay. After disposal, the tunnels and rock caverns will be sealed. Courtesy: SKB

SKB President Claes Thegerström said the site offered rock at the repository level that was dry and had few fractures. The Forsmark site also won over the second-choice site at Laxemar, in the municipality of Oskarshamn, because it would require less space compared to a repository in Laxemar. "This means that less rock needs to be excavated and less material will be needed for backfilling," Thegerström said.

SKB said it will now begin building surface facilities in the existing industrial area and proceed to complete applications for permits that will be reviewed by the Swedish Radiation Safety Authority and the Environmental Court. The applications will be submitted in 2010 and include the environmental impact assessment and a safety analysis for the Forsmark repository. If all goes as planned, construction could begin in 2016 and the first canister could be deposited in the repository in 2022 or 2024.