Siemens in November introduced the SGT-A45 TR, a mobile 44-MW aeroderivative gas turbine designed for the world’s booming fast power market. While the product’s launch is pivotal for the giant technology conglomerate—which has suffered flagging orders for large gas turbines—Siemens’ interest in distributed generation also points to a prominent direction in which the future of gas power may be heading.

The SGT-A45 TR aeroderivative gas turbine (Figure 1), which was unveiled at a ribbon-cutting ceremony in Houston on November 1, is the newest offering in Siemens’ expanding gas turbine portfolio (Figure 1). 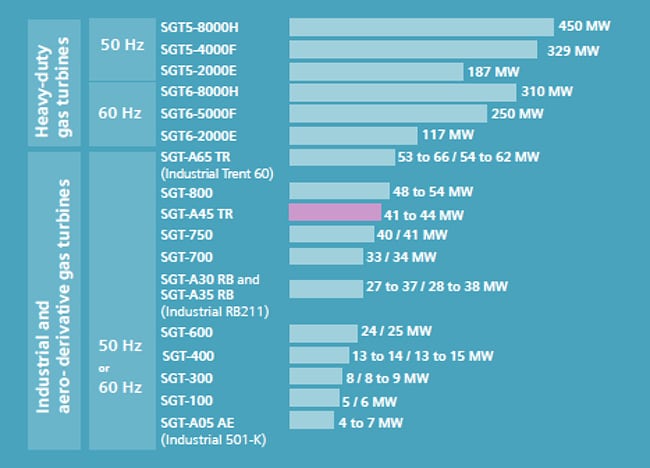 Developed over the past 20 months, the SGT-A45 TR derives directly from the SGT-A65 TR, a 66-MW model whose design was first released nearly 20 years ago, and in turn, was based on Rolls Royce’s Trent 800 aero-engine technology (Figure 2). The A65, formerly known as the “Industrial Trent 60,” was developed as a flexible, efficient, and high-cyclic capability engine, ideal for peaking applications, explained Brian Nolan, a Siemens SGT-A45 product manager on November 1. But while the A65 uses a low-pressure booster and three coaxial, independently rotating shafts contained within a carcass of axially joined circular cases, the A45 uses only two shafts as well as a free power turbine. It sheds the A65 low-pressure booster to keep it compact, he said. 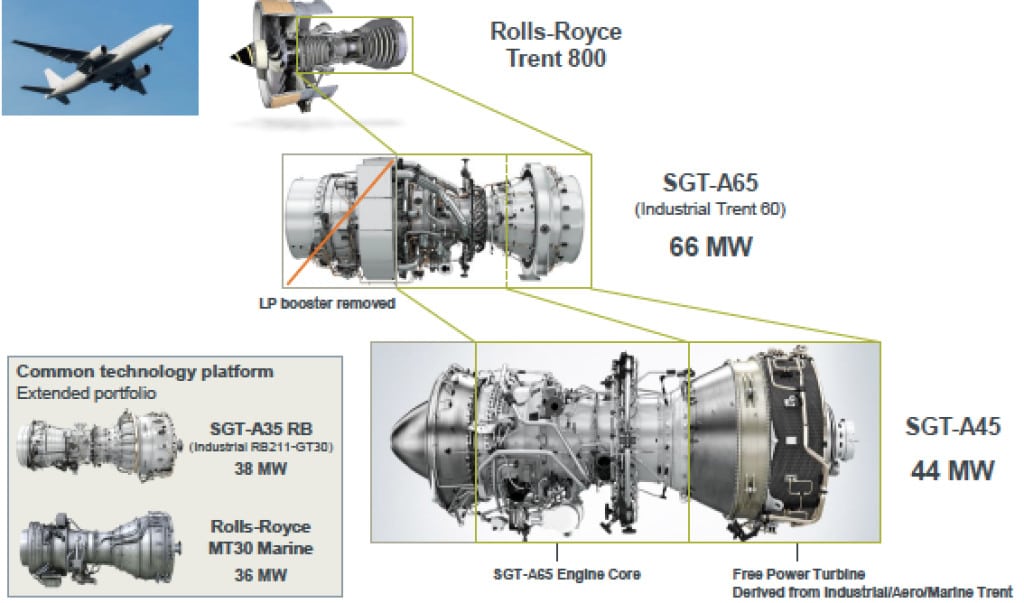 At 44 MW, the turbine offers “significantly more power and higher efficiency than any other mobile gas turbine,” Nolan said. It can use liquid or gas fuel and is able to switch as needed during operation, and it can go from 50 Hz to 60 Hz or vice versa with a simple field re-configuration with no changes to hardware.

Its compact size also allowed Siemens to design a highly standardized mobile unit—so small that it can fit in three trailers (Figure 3): one houses the A/C generator and generator lubrication and cooling systems; the second contains the gas turbine and ancillary systems; and the third, the unit control system, motor control center, and switchgear. The trailers can be shipped to site by road, air, or sea, and the entire package can be installed and commissioned in 12 days. 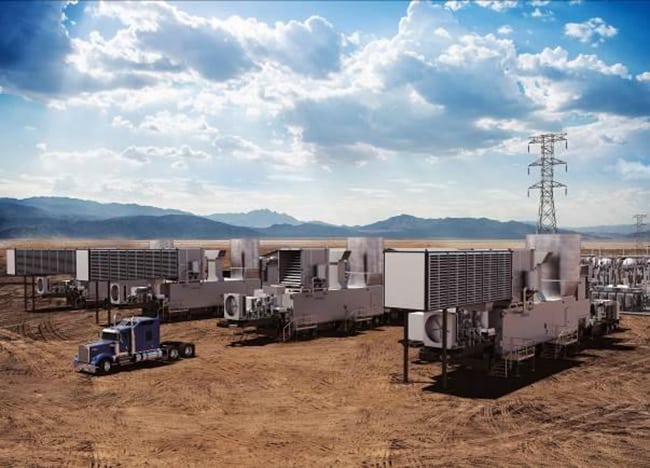 For Nolan, the mobile unit’s applications are boundless. Because the plant can be installed and commissioned in such a short time, it could provide some relief to disaster-ravaged areas. It could also serve to “bridge power” in the short term as an emergency measure, he said. Also, it could be used to balance power from renewables. “As some major baseload generators, as we’ve seen in the past, come offline, there’s more variability from the wind and solar,” he said. “The ability of a machine like this to be brought in to augment and stabilize power production is a possibility.”

Meanwhile, the new turbine offering may be pivotal for Siemens, too. The company headquartered in Berlin and Munich and is active in 200 countries has suffered headwinds owing to flagging orders from its lucrative power and gas division.

In an August 2017 analyst call centered on its third-quarter 2017 fiscal year earnings, while Chief Financial Officer Ralf Thomas said the company was “fully on track for another strong year,” he noted orders within its power and gas division had fallen “sharply”—by 41% compared to figures from the third-quarter of 2016. Revenues have fallen mainly owing to declines in its large gas turbines and compression business. Profits also fell 23% stemming from “continued price pressure due to overcapacities,” the company has suggested.

In an effort to offset those changes in profitability, the company has picked up more business in the field of digitalization and sought to expand elsewhere. The introduction of the SGT-A45 also points to a serious interest in distributed generation.

According to the company, gas turbines are becoming an important part of the world’s rapidly expanding distributed generation segment. Sales of gas turbines of between 3 MW and 66 MW—typically used in the industrial power generation market—have grown in spurts (Figure 4) owing to volatile oil prices and financial ups and downs, it says in a paper presented at POWER-GEN Europe in Cologne this summer. In 2016, Asia had the largest distributed power gas turbine market overall, led by Japan, which installed several small turbines of less than 6 MW for backup power. But Africa, Latin America, and China also saw “robust growth” last year, installing high-units in the 42 MW to 66 MW range. As could be expected, however, economic factors continue to depress market potential in North America, Europe, and Central Asia, it said.

Yet, the outlook for distributed power products, and especially mobile and fast power, looks especially bright, the paper suggests. For one, the world is becoming increasingly electrified and digital, Siemens notes. “Digitization of information has become a pre-requisite for modern life,” it said. “The need for electricity to serve the growing, complex and changing demands of industry and populations that rely on it is a global one. No access or limited access to electrical power is to live outside the confines of the modern world, a condition that will likely not be tolerated anywhere.”

Another important consideration is that power is still a scarce resource in some regions of the world—specifically in sub-Saharan Africa, where “[t]here may be some electricity and some services but there is a clear lack of a robust electrical infrastructure,” it noted.

Africa—the second-fastest growing economic region in the world—has both high foreign direct investment and a vastly underserved demand for power, even as its large and diverse population soars and becomes more urban- and industrial-oriented. The continent is poised to see its greatest increase of power generation in the next two decades—and according to Siemens, based on emissions, efficiency, and environmental concerns, by 2040 Africa’s use of natural gas will increase by more than 800% to fuel a quarter of all the continent’s generation (Figure 5).

“Siemens intends to participate in Africa’s growth to 1,600 TWh [per annum] in 2040,” the company said. The African market displays a “more imminent need—to quickly improve the African power infrastructure by providing highly flexible solutions and fast order-to-execution projects in the form of small and medium-sized power plants,” the company said. “The combination of these diverse requirements calls for market and customer-specific solutions in order to truly answer Africa’s call for electricity.” Distributed generation with light industrial and aeroderivative gas turbines, in particular, makes sense for the continent’s needs because it allows for fuel flexibility, fast-response times, and low maintenance downtimes. “At the same time, they can help to optimize network operation by providing voltage support, or reactive power and inertia to a local grid.”

As significant is a trend emerging globally, which suggests a clear shift is occurring in the way power is being used. Between 2010 and 2015, the number of units sold into global traditional stationary gas turbine markets of between 20 MW to 50 MW fell 70%. “However, during the same period the number of units sold into mobile gas turbine applications increased by 150%,” Siemens said. Many of these were for projects that required urgent delivery and rapid installation—and the bulk were installed in the Middle East, North Africa, and Latin America (Figure 6). 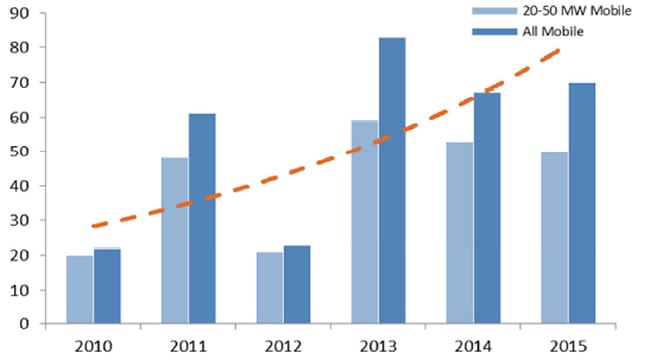 Eager to grab a share of this market, Siemens may have already bagged its very first customer for the SGT-A45 gas turbine.

At the ribbon-cutting ceremony and product launch in Houston on November 1, Afghanistan Ambassador to the U.S. Dr. Hamdullah Mohib made an unscheduled speech announcing a potential agreement with Siemens for the war-torn Islamic republic’s three-phase energy plan, which seeks to add more than 200 MW of power capacity to the country’s grid. On November 14, Siemens revealed that it had signed a memorandum of understanding (MOU) with Bayat Power, Afghanistan’s largest power generator at the ribbon-cutting.

The three-phase program, announced last year when Bayat signed its own MOU with the Afghanistan government, seeks to boost independent power producer involvement. “[The] first phase will help kick-start Afghanistan’s journey towards energy independence, help restore our domestic gas-to-power industry and develop our nation’s economy,” said Dr. Ehsanollah Bayat, Chairman of Bayat Power.  “We look forward to working with the Afghan government, our technical partners like Siemens and most importantly, our fellow citizens, in our mission to create jobs and opportunities which benefit the entire nation.”

The development is positive for Siemens, but the company already faces hefty competition.

Contracts have been pouring in for APR Energy, a company specializing in fast-track mobile turbine power and has installed more than 4.2 GW of power capacity across more than 30 countries. That’s notable because the company, which has its headquarters in Jacksonville, Florida only got its start about 13 years ago, when co-founders John Campion and Laurence Anderson bought the Alstom Power Rentals division from French giant Alstom Power. By 2013, with regional hubs already established in Panama, Dubai, and Malaysia, the company also took on GE’s power rental business in a $314 million deal. The company has been filling orders for diesel- or gas-powered modules spanning 35 MW to 100 MW from Australia and Argentina to Egypt, Botswana, Guatemala, Senegal, Libya, and Uruguay—countries reeling from power shortages and in dire need of rapidly deployable solutions.

Meanwhile, at a business briefing hosted by the U.S. Trade and Development Agency to connect African countries with several U.S. companies that offer “fast power” solutions, a number of African delegates noted the need for emergency supplies in parts of their countries that had been cut off from the national grid, or stricken with drought or other fuel shortages. Along with representatives from Siemens’ SGT-A45 Mobile Unit, suppliers included EthosEnergy, Fluor, Modec International, PW Power Systems, and Tiger Industrial Rentals.

According to Siemens, the SGT-A45 already has an advantage in the market. For one, the company says it is the “most powerful mobile unit on the market.” And second, the full package is designed for rapid deployment. All this is offered along with “design features outstanding power density, high fuel efficiency and excellent operational flexibility,” it said.