[Update Feb. 10] Duke Energy workers have succeeded in permanently stopping the leak from its coal ash pond at the Dan River Steam Station, the company reported on Feb. 8. A storm drain under the pond broke on Feb. 2, releasing coal ash and contaminated water into the Dan River.

The leak was not plugged for nearly a week because workers needed access to the site of the break to complete repairs. Inspections after the break revealed that the storm drain under the pond was constructed of corrugated metal for about two-thirds of its length, not reinforced concrete as Duke believed. The storm drain predated construction of the coal ash pond, and the break occurred in the metal section of the drain.

The long-term impact from the spill is still uncertain, with Duke, state officials, and environmental groups releasing conflicting results from tests of the river water. Tests conducted by the Waterkeeper Alliance at the site of the spill showed elevated levels of arsenic and heavy metals, while tests conducted by Duke two miles downstream showed levels within safe limits. Meanwhile, the North Carolina Department of Environment and Natural Resources corrected an erroneous report last week by stating that its tests found levels of arsenic, copper, iron, and aluminum above state standards.

Duke officials formally apologized for the accident at a media event on Feb. 7 and committed to doing what it took to clean up the Dan River.

“Whatever it may be that is required of the river, you have our complete, 100% commitment to make it right,” Paul Newton, Duke’s president utility operations in North Carolina said. “We take full responsibility.”

[Original story Feb. 4] A storm drain under a coal ash pond at the Dan River Steam Station in Eden, N.C., broke this past weekend, releasing around 50,000 to 80,000 tons of coal ash and 24 million to 27 million gallons of contaminated water into the Dan River, Duke Energy announced on Monday.

The Dan River station was retired in 2012 and has been replaced by a combined cycle plant. The site is one of 12 owned by Duke for which the state of North Carolina sued the company last year for failing to properly store coal ash and coal residuals. At the time, the state Department of Environment and Natural Resources (DENR) said that inspectors “had observed seeps, or releases of liquids not authorized as part of the permitted discharges, at most of the facilities.”

The new leak at Dan River has been temporarily contained (Figure 1), and Duke personnel and other experts are still working to permanently stop the release. DENR and EPA officials are on site monitoring the operation. The cause of the break has not yet been determined. 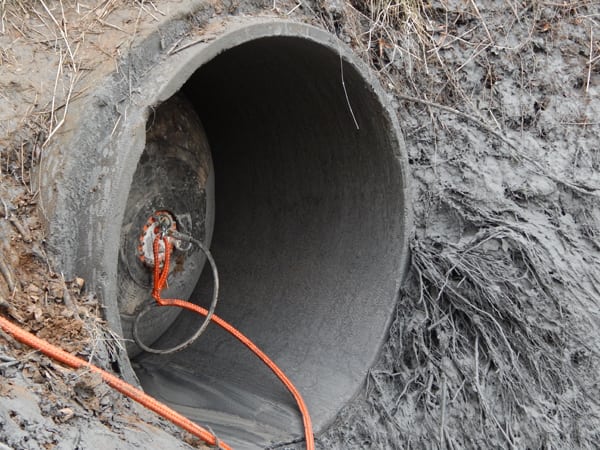 Though the Dan River is a source of potable water for a number of towns and cities downstream, affected municipalities were notified in time to take protective measures, unlike last month’s spill in West Virginia in which a chemical used for coal processing contaminated drinking water supplies across the state.

Still, environmental groups denounced Duke’s 24-hour delay in releasing information about the accident. “The Dan River spill happened on Sunday and Duke Energy still has not reported the results of any water quality tests,” said Donna Lisenby, global coal campaign coordinator for Waterkeeper Alliance. “This is unacceptable. Downstream communities need to know what pollutants Duke dumped into the Dan River.”

Duke said the ash basin dam protecting the 27-acre pond has not been affected and remains stable. However, some erosion has occurred on the interior side of the berm farthest from the river, and engineers are working on a plan to stabilize that area. From photos of the site released by Duke, it appears most or all of the water in the pond may have escaped.

The incident is likely to resonate in the debate over the EPA’s still-pending revisions to rules covering coal combustion residuals. Last week, a federal court in Washington, DC gave the agency until Dec. 18 to issue its proposed regulations. The process began largely in response to the December 2008 failure of a coal ash impoundment at the Tennessee Valley Authority’s Kingston coal-fired power plant in Tennessee.